Fresh air and water are always a good combination.  With excellent rail links as well, it made the riverside town of Wivenhoe a good choice for my third outing with Greater Anglia this summer.  There’s an easy but very pleasant 4km walk that takes you along the banks of the River Colne from Hythe to Wivenhoe.  The really good news is that if you don’t wish to walk it in both directions, the path is easily accessible from Hythe station and leads you straight into the station car park at Wivenhoe.  Both the path and the railway line follow the banks of the Colne Estuary, offering splendid views.  As a walk, it couldn’t be more convenient if it tried!

If you’ve been following my previous blogs, you’ll know that I’ve enjoyed days out by train to Harwich and to the East Anglian Railway Museum.  Greater Anglia have some very affordable advance fares across their network as well as £2 child fares and many other offers.  It’s well worth checking out their website if you’re at a loose end this summer. 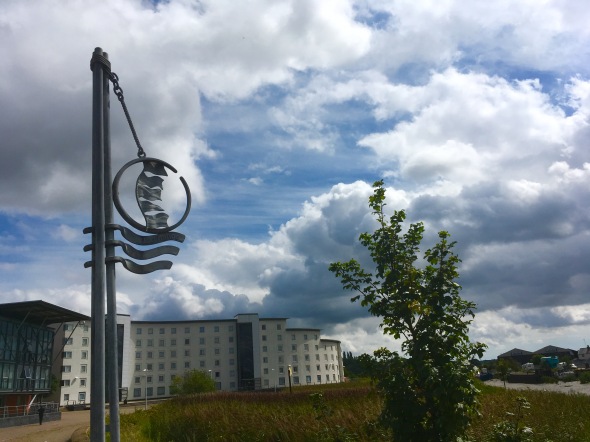 I set off from Hythe station just before lunchtime and walked along the riverbank towards the University buildings and on towards the new apartments that are springing up.  I’d come this route a thousand times – it’s on the way to B&Q and Tesco – but from the car, you just don’t see what’s under your nose.  There’s some fantastic artwork to be seen.

Information boards telling a little of the area’s history help provide context.  In parts, they form trail markers.  You can’t miss them in their steel cages.

Following the river, I passed the iconic lightship and headed off in the direction of Wivenhoe.  Urban becomes rural pretty quickly and it’s a pleasant and flat walk past riverside meadows, reed beds and woodland.  Even on a weekday, there were plenty of joggers and cyclists using the trail, as well as a man in a wheelchair walking his dog.  This is a trail for everyone to share. 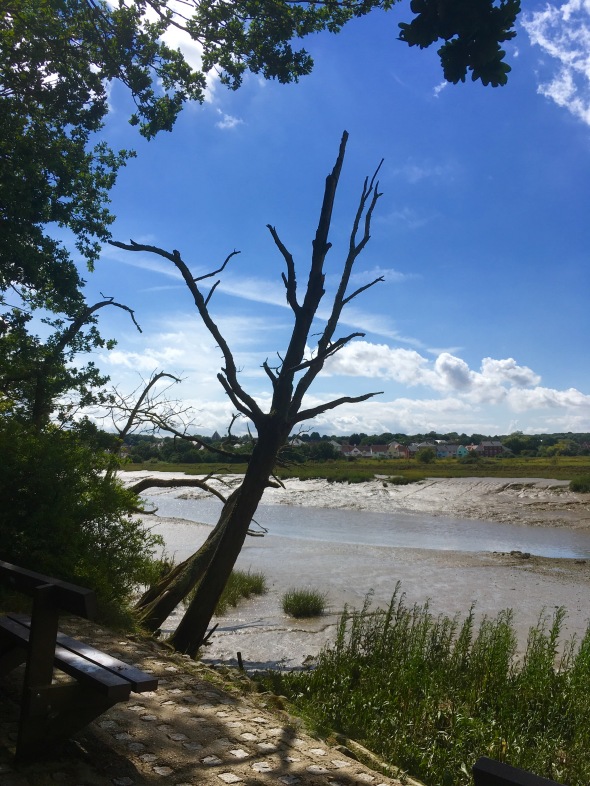 Towards Wivenhoe, there’s a board marking the entrance to the Ferry Marsh Colne Local Nature Reserve; the name’s a bit of a mouthful but it’s well worth the diversion.  There’s plenty of seating along the river banks on which to sit and watch the birdlife and see what the ebb and flow of the tide reveals.  If you’re lucky you could even see otters or water voles.

But it was Wivenhoe that I’d come to see.  From its railway station, I found myself on the charming quayside in just a few minutes.  Wivenhoe Quay is packed with buildings of historic interest, among them The Nottage, open on weekends, housing a museum with an eclectic collection of nautical items.  Every Saturday and Sunday afternoon until September 3rd you can visit to learn more about Captain Nottage, the Victorian army officer and keen yachtsman whose name is on the door.

Next door to The Nottage is the excellent Rose and Crown pub.  Its outside tables are perfectly placed to watch the comings and goings along the Quay and the food’s not too shabby either.  In the sunshine, there are few places in Essex more attractive for an al-fresco lunch. 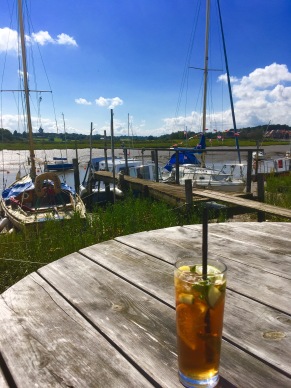 I wanted to see something of Wivenhoe and began to explore its quiet streets.  Just along Rose Lane, I noticed a blue plaque commemorating the great Miss Marple actress Joan Hickson, who once made her home here.  Around the corner, I couldn’t resist browsing the produce on offer in the Village Deli.  Owner Mike had an interesting take on the calorie issue presented by the ice cream on sale.  According to him, if you use the attached spoon correctly, the calories can be neutralised and thus don’t count.  That’ll be a salted caramel tub for me, then, and…

Along the High Street I found the Wivenhoe Bookshop, the kind of place that almost doesn’t exist anymore.  Staff member Sue told me they’ve worked hard to create a space that works as a community cultural hub as well as a bookstore.  Coming up there are writers’ workshops, book signings, a knitting group and even a philosophy breakfast, reflecting the University of Essex presence on the edge of town.  You don’t have to be a local to get a warm welcome.  The place has a homely feel – the sofa in the back room was just the kind of sofa you’d want to sink into on a rainy afternoon.  I was blessed with blue skies so it was time to move on.

My final port of call was to The Sentinel Gallery, run by the delightful Pru Green whose enthusiasm for art is catching.  Inside, work from some of East Anglia’s most talented artists was on display as well as some of the most colourful pottery you’ll find in the county.  The modern structure features angular lines and huge panes of glass.  It stands in stark contrast with the very traditional buildings that surround it, but it doesn’t jar.  And the light which floods into the exhibition space is incredible.  Even if you’re no art expert, this place is worth a visit, though don’t come on a Monday or a Tuesday as they’re closed.

Wivenhoe, I decided, had much to recommend it and if you want to see for yourself, there’s a ton of special events still to come this summer.  The Sunday, August 20th, sees the Wivenhoe Crabbing Competition, great fun for all the family; register on the Quay from 10.30am.  The town hosts its Beer Festival from September 1st to 3rd with the Art Sea Music Festival following close behind on September 9th.  Throughout the summer season, a weekend foot ferry links Wivenhoe to Rowhedge and Fingringhoe so long as the tide is high enough.  With limited parking in Wivenhoe, it’s a really good idea to take the train. 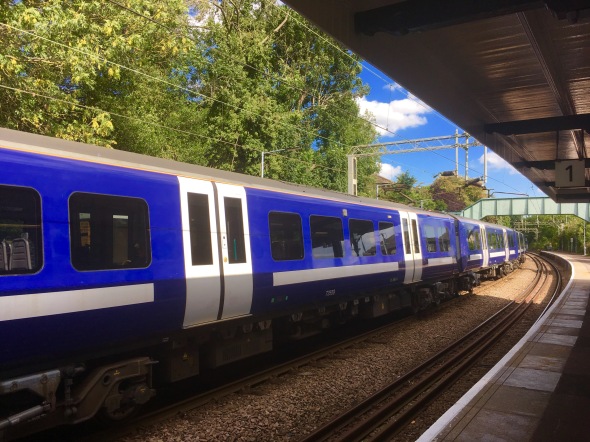 With thanks to Greater Anglia for providing transport to and from Wivenhoe.