A day trip to Essaouira

Essaouira is a port on the Moroccan coast that’s been on my travel wish list for many years. While I was in Morocco earlier this month, I figured I could visit the town as a side trip from Marrakesh and ended up spending a very enjoyable day there. Here’s how to do it. 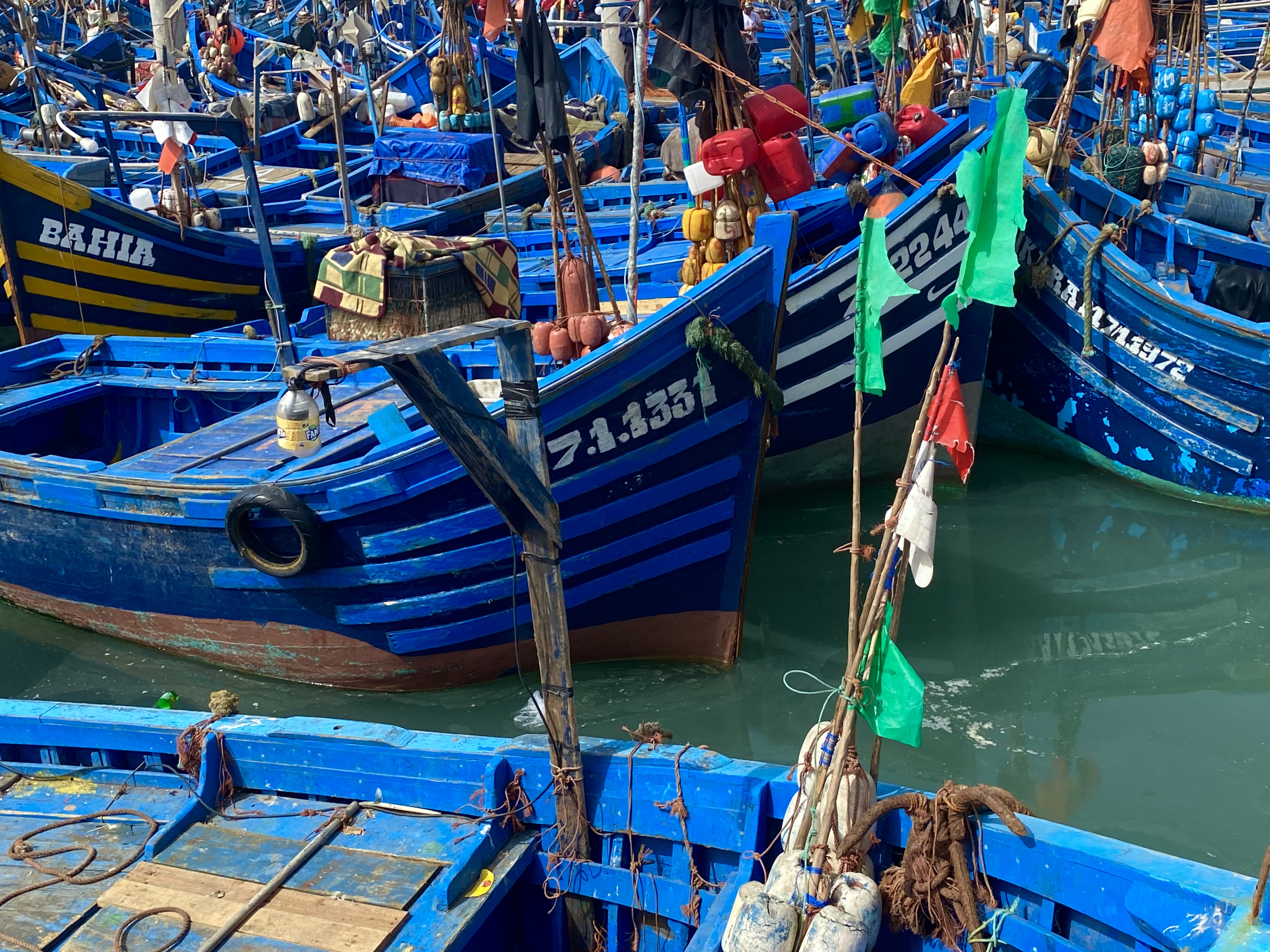 Essaouira’s location beside the Atlantic Ocean makes it an ideal spot for surfing. On the day I visited, the air was still, with no waves of any use to anyone hoping for more than a swim. The beach was relatively busy – even on this early October day the temperature was in the mid-twenties. I strolled along the seafront to the port, where a mass of pretty blue fishing boats bobbed in the smelly, polluted water. 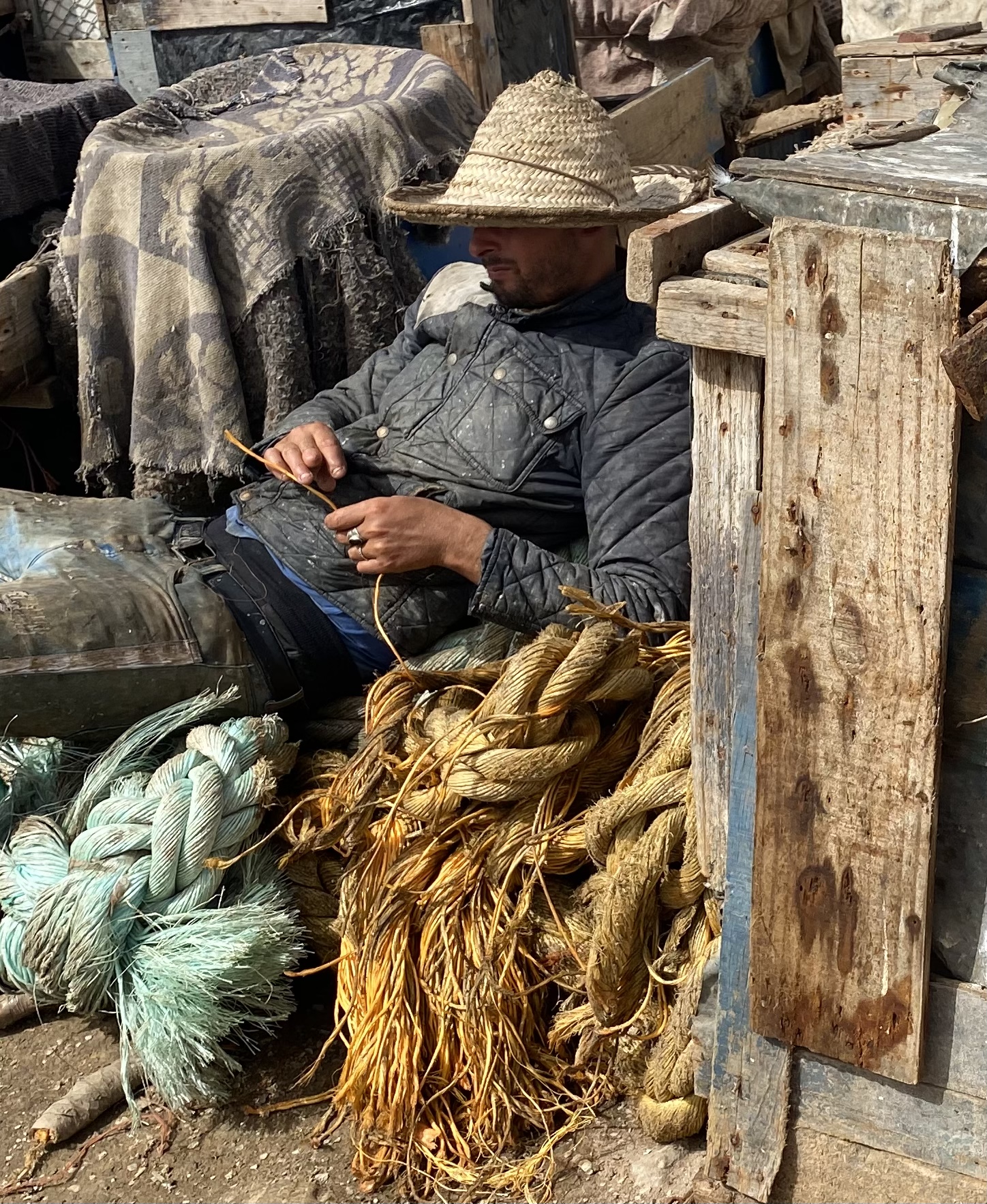 Essaouira is famous for its sardines and everywhere I looked there were boxes of fish packed in salt. Some were being detached from lines, others placed on grills ready for lunch. Watched by a number of hungry cats, I drew up a faded plastic chair and tucked in to a plate of grilled sardines and fresh bread – it cost me less than £3 and it was utterly delicious.

Next, it was time to explore the medina. Essaouira’s walled old town isn’t as densely packed as those in Marrakesh or Fes. With broader streets, there’s less likelihood of being run over by a motorbike or donkey cart as you browse. Sellers aren’t pushy and you can inspect the merchandise with no more than a laidback greeting. However, it lacks the choice you’ll find in the souks of Marrakesh, so save your purchases of brassware, leather goods and textiles for later – read my tips on how to haggle first.

What I did find fascinating, however, was the quiet back alleys of the Jewish Quarter. The city they used to call Mogador welcomed the Jewish community for their skills as traders. Their part of Essaouira is called the Mellah. Today, this walled ghetto is undergoing change; there is evidence of demolition and renovation all over.

But here and there you’ll find the Star of David carved into a wall, spot a sign indicating a centuries-old hammam or catch a woodworker carving an intricate mirror.During my visit the Slat Lkahal Mogador synagogue was closed, but I was able to duck under arches and wander along narrow derbs to get a feel for the neighbourhood.

I was already in Marrakesh, so there were a few choices about how to get there. I could have booked an organised tour, though that isn’t my cup of tea. I could have rented a car and driven, but decided against that so that I could have a nap on the journey if I wanted to. The riad I was staying in suggested taking a grand taxi from Bab Doukkala. Pre-COVID I’d have been fine crammed into a small space with a bunch of strangers but didn’t want to tempt fate. So as the railway doesn’t head that way, the option I was left with was to take the bus.

CTM and Supratours both serve the route, and CTM was cheapest. My ticket cost 72 dirhams each way (about £11.60) and was bookable online. It left from a terminal a few minutes’ walk from the railway station, so I jumped on a city bus, grabbed a coffee at the station’s branch of Starbucks and strolled to the bus station in good time.

The journey took about three hours each way but the bus was relatively empty so I had a double seat to myself in each direction. The scenery wasn’t great for the first part of the way as the route takes you through featureless desert. As you near the coast, there are more trees. Some were full of goats. 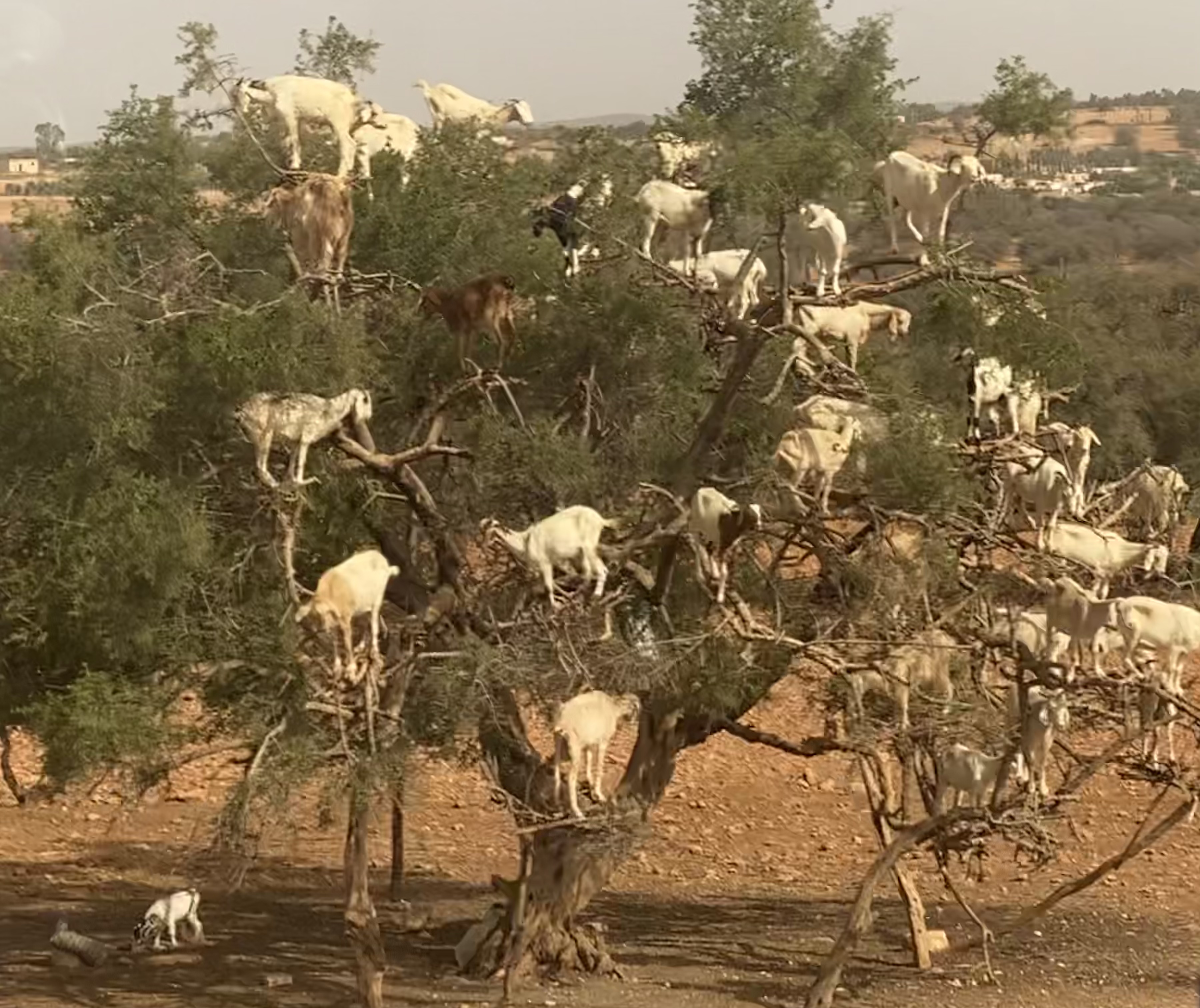 These tree-climbing goats traditionally munched on the leaves of the argan trees but today, it’s a contrived tableau aimed at tourists, who are charged a fee for a photo. This article from National Geographic explains how it isn’t good for the goats or the trees. Such exploitation of wildlife is sadly commonplace in Morocco – in the Djemaa el Fna I saw monkeys on chains being led around the square in the hope of persuading someone to snap a selfie. Such behaviour mars what’s otherwise a super place to visit, though while it’s a necessary source of income, sadly it’s hard to see anything changing.

This entry was posted on October 21, 2022 by juliamhammond. It was filed under Africa, budget travel, Day trips, Destination information, Independent travel .