To London with Greater Anglia

It’s been a busy few weeks for me when it comes to travel. I expect a lot of people think a travel writer is always travelling, but I choose to work part time and limit the number of trips I make so that I can be here for family and my beautiful dogs. Nevertheless, travel is always a privilege. Kyrgyzstan really blew me away, but 16 hours after stepping through the front door it was off to Devon, having written three articles and done five loads of washing – oh how glam! As we drove across the Dartford Bridge, a Eurostar passed beneath us, reminding me that travelling by train really is the best way to travel. So I was very pleased to have a day out in London courtesy of Greater Anglia to look forward to.

One of the most frustrating things about train travel is when there are no trains. The dreaded words “rail replacement bus” strike fear into us all, so I was really pleased when Kerri from Greater Anglia informed me that there is almost no engineering work planned on our lines into Liverpool Street all summer. She told me:

“Network Rail has paused its engineering work on the mainline for the summer with only a couple of exceptions – Sunday 16th June, when all journeys will involve a change at Stratford for the Underground into London, and Sunday 8 September, when there are buses between Colchester and Chelmsford during the morning.” 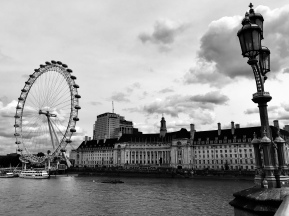 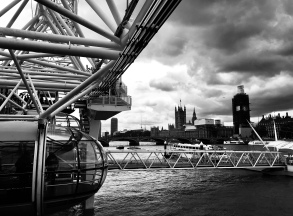 So if you were thinking of a trip up to London, then this summer’s an excellent time to go. For this week’s visit, I decided to focus on the South Bank. It’s a great area for families as there are a number of kid-friendly attractions. The London Dungeon, Shrek’s Adventure and Namco Funscape are all located close together. I opted for a visit to the SEA LIFE London Aquarium and a ride on the Coca Cola London Eye. 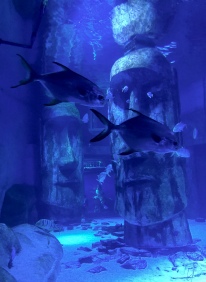 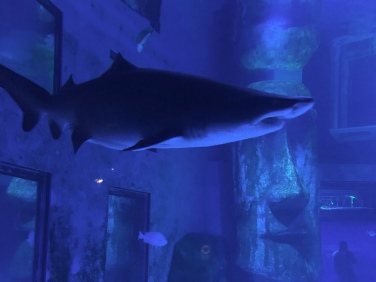 First up: the aquarium. What used to be the London Aquarium, housed in the bowels of County Hall at Westminster Bridge, was bought by Merlin Entertainments in 2008 and reopened a year later with a new look. It receives mixed reviews on Trip Advisor, but I was interested to see what it was like for myself. I’m sorry to report that my visitor experience didn’t get off to a good start. The member of staff who dealt with me on the ticket desk was rude and her manager wasn’t much better. Fortunately the other members of staff I encountered were more helpful and enthusiastic.

The SEA LIFE London Aquarium exhibits are arranged IKEA-style. Once you’re in, there’s no going back and even though I was assured it was a quiet day, there were some bottlenecks. At the penguin enclosure, two large primary school groups meant that it was difficult to see the birds, who’d taken themselves off down to the far end of their space, presumably for a bit of peace and quiet! The huge shark tank was very impressive, however, and I thought that it was well designed as you could get access to the tank’s windows on two different levels. Most impressive were the jellyfish, mesmerising as the lights illuminating them changed colour. 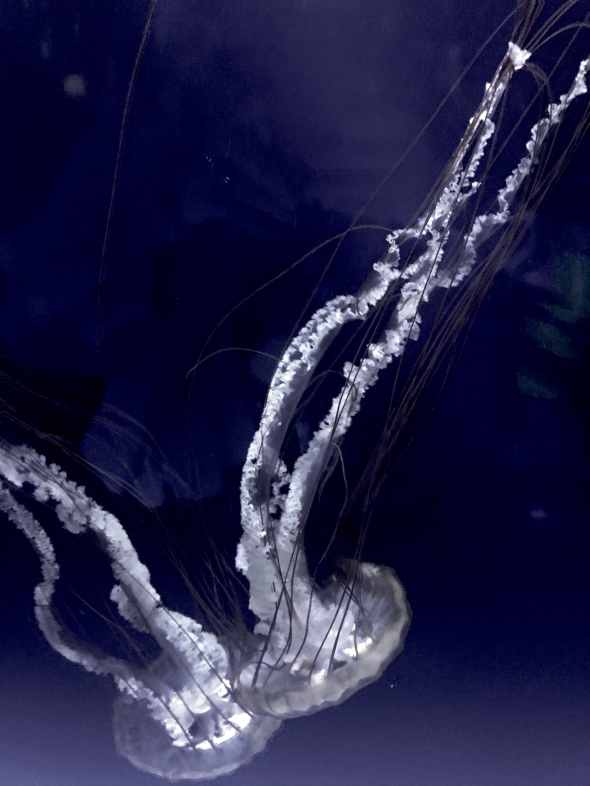 Throughout, there are a lot of opportunities to interact with the exhibits. The kids I saw really enjoyed being able to stick their heads into the perspex domes to get a 360° view of the marine life swimming around their heads. However, it isn’t a cheap day out. Standard tickets cost £27, though families could save a little by purchasing a family ticket. Adults would pay £26, children from 3-15 £22 and under 3s free. To snorkel with sharks for 15 minutes would set you back £150. 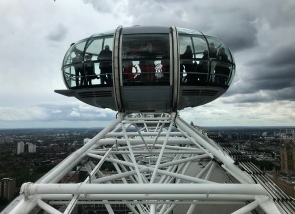 Next: the London Eye. This was a completely different kettle of fish if you’ll pardon the pun. I’ve been before and it never disappoints. Their customer service is excellent. Every member of staff I spoke to couldn’t have been more friendly and genuinely wanted to ensure I had the best time. And it wasn’t just because I had a complimentary pass; I listened in on a few other conversations and was delighted that staff were so polite and helpful to everyone. Though they offer a VIP experience, it seemed that those staff managing the queue to board treated everyone like a VIP.

The flight was great, even though the sky was threatening rain with dark thunder clouds in all directions. It brought to mind my first ever visit to the London Eye, not long after it opened, when an elderly lady behind me in the queue was rocking a hat she’d fashioned from a John Lewis carrier bag. This time, the rain held off and visibility was pretty good. We were a mixed bunch in our capsule, with visitors from the USA, Brazil and New Zealand all giving it the thumbs up.

“Best day ever!” one lady said. 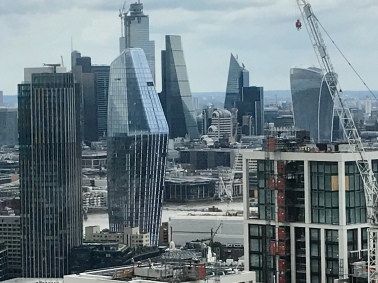 Big Ben of course is covered in scaffolding, but it was interesting to see how much the skyline had altered in those almost two decades since my first visit. If you don’t know your Gherkin from your Walkie Talkie, there’s a useful 360 degree map that will cost you £2 on top of the price of your ticket which will help you identify what you’re looking at. Prices are pretty much the same as for the SEA LIFE London Aquarium and there are occasional special events for a similar entrance fee, like Time Out’s smart phone masterclasses. Of course, you can opt for a champagne experience too, for something extra special. 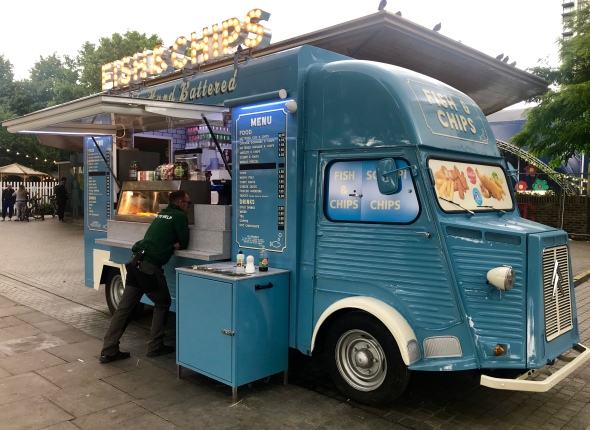 The trouble with London, understandably, is big city prices. Finding somewhere reasonably priced to eat in a city with such high rents can be a challenge. Fish and chips from the wagon on the South Bank would have set me back £10. If the weather’s fine, there’s another option. The Jubilee Gardens Trust work hard to maintain a sizeable patch of green space right next to the London Eye. There’s a play area for young children and the Trust have just purchased what was once a car park and have plans to turn it into an adventure playground for older children. It’s perfectly located for a summer picnic on a dry, sunny day.

Around ten minutes walk further east is one of my favourite spots this side of the river: Gabriel’s Wharf. This eclectic mix of boutiques and eateries has a more local vibe than the tourist traps closer to Westminster Bridge. Spend your £10 here, and it will buy you a delicious sit down lunch rather than an average takeaway. It’s worth checking out some of the independent stores here too. The House of Eunice works with artisans in India to create some unique clothing designs – the owner runs trips to India too if you’re keen to learn about the processes for yourself.

We really are lucky to have such a magnificent city on our doorstep. Thanks to the speedy trains, from my Essex village by the coast I can still be in the City of London in under 70 minutes door to door (as little as 48 minutes on the train). That is always a good feeling, particularly on the way home! The recently launched Norwich in 90 and Ipswich in under 60 services bring East Anglia even closer to the capital.

If you buy your train ticket in advance you can travel to London from Colchester or even as far as Norwich for just £10 each way. From Southend, getting to London can cost as little as £6 single if you are flexible with dates and times. You don’t need an Oyster card to score the lowest fares within the capital, as you can tap in and tap out with a contactless debit card in the same way.

You don’t need me to tell you just how many visitor attractions there are in London. Greater Anglia offer a range of 2for1 deals which can add up to some pretty significant savings. Museums, theatre tickets and even bike tours are included in the promotion – dates and specific savings vary so check on Greater Anglia’s website for more details. While the SEA LIFE London Aquarium isn’t participating, their sister attractions in Southend and Yarmouth are. The current London Eye offer with a valid rail ticket is a 2for1 deal for £30.

With thanks to Greater Anglia for my train ticket and to Merlin Entertainments for complimentary passes to SEA LIFE London Aquarium and the Coca Cola London Eye. I appreciate their generosity. All views expressed in this blog are my own.