Why not take the train to Norwich?

Regular readers of this blog will know that I’ve worked with Greater Anglia on several occasions. They sponsor me to go to places in the Greater Anglia network and in return, I share my experiences. This weekend, I took the intercity train to Norwich. 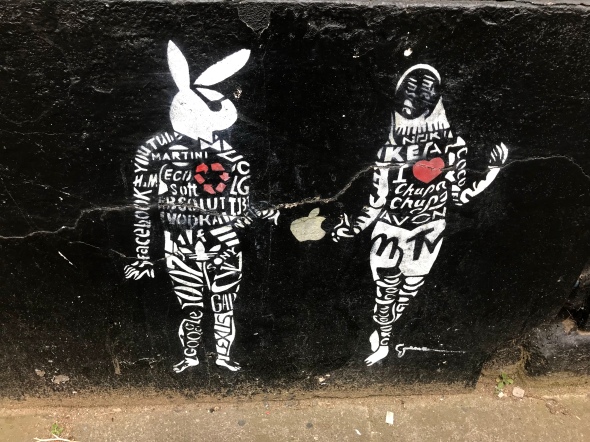 Journey time is only an hour from Colchester station, typically around half an hour quicker than it would be by road, and with standard advance fares costing as little as £8 each way, surprisingly cheap. Factor in Greater Anglia’s offers – accompanied children go for just £2 (just turn up on the day and nab this fare for any off peak journey on the network) and 2for1 deals on many attractions – it’s a tempting prospect.

To be honest, the intercity trains that currently run on the Greater Anglia network look pretty dated from the outside. However, when you step inside, they’ve been refurbished as part of a £12m upgrade. What you get is a very comfortable ride. The seats are like armchairs and there’s plenty of legroom. There’s a choice as you’d expect of table seating, great for families or groups of friends, and airline-style seats. That upgrade has paid for new carpets, seat covers, improved lighting and upgraded toilets. Best of all are the at-seat powerpoints, which came in very handy on the return journey when I needed to use my phone which as always had a woefully low battery. It’s also convenient to have onboard WiFi. The only thing I didn’t like was having to lean out of the window to open the carriage door, but fortunately those waiting on the platform helped when I couldn’t quite reach. It reminded me of the slam door trains in the 1970s, though getting out wasn’t as impossible as it was with that horizontal squeeze – if you travelled by rail back then, you’ll know exactly what I mean.

Anyway, I’d got so comfortable it was almost a pity to arrive in Norwich (and I promise I’m not just saying that because Greater Anglia paid my fare) But the sun was shining it was the first really mild day of the year, perfect for a stroll alongside the River Wensum which does a loop of the city centre. The river is almost right in front of the station. Within a couple of minutes, I was walking along a riverbank lined with willow trees. The first landmark I passed was Pull’s Ferry. This flint building was once a watergate and takes its name from John Pull, a ferryman, who ran the boats in the first part of the 19th century. Apparently, the stone that was used to construct Norwich Cathedral came in via this route, having been imported from Normandy.

I strolled further along the river bank until I came to the Red Lion pub. On its slipway, a group of people were stepping into wooden Canadian-style kayaks. Chantal and Nick set up Pub and Paddle a few years ago – this year will be their fourth summer and the business is going from strength to strength. Chantal told me that one of their most popular excursions is also their shortest, suitable for anyone. This four hour rental takes paddlers past the cathedral, football ground and Colman’s mustard factory to the village of Thorpe St Andrew. Most people take a break at one of the riverside pubs before returning to the Red Lion. At only £20 per person, it’s good value. Chantal and Nick make their own kayaks and also have a couple of wooden rowing boats for hire for those wishing to stay in the city centre. I didn’t have time to do this, but it’s definitely a good excuse to return. 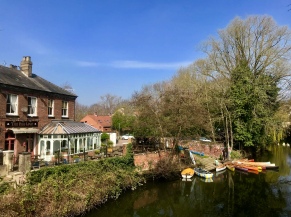 My next stop was Cow Tower, a 14th century artillery tower built as a response to the threat posed to Norwich not only by the French but also by local rebel forces. Contrary to what its name suggests, it wasn’t constructed to shelter cows, though this Eastern Daily Press article suggests that might have happened later. Instead, it was named after the surrounding meadow, which was called Cowholm. It was big enough to hold a garrison but now, it’s just a shell, the floors and roof long gone. As a consequence, you can’t go inside. Nevertheless it’s an imposing structure, standing almost 15 metres high, and very photogenic in the spring sunshine, particularly when the daffodils are in bloom. On the other side of the path from the Cow Tower there’s a rather lovely carved wooden seat, its smooth curves perfect for lying back to watch cotton wool clouds scud across a blue sky. 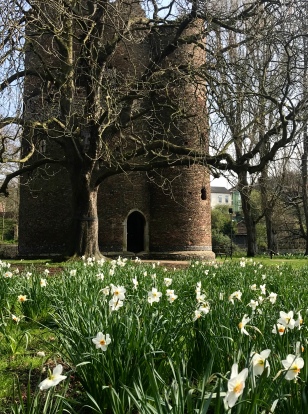 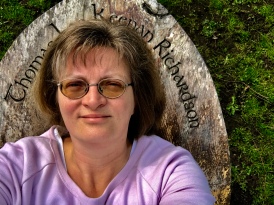 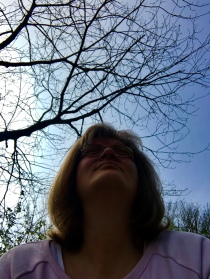 I was reluctant to leave my seat, but wanted to take a look at Norwich Cathedral. Construction began in 1096, using local flint and mortar faced with that limestone imported from Caen. It’s quite a large site – actually two churches and an Anglo-Saxon settlement were knocked down to make room for this new structure, such was its scale. The cathedral close is the largest in England. By 1145, the cathedral was pretty much completed. The same building you see today would have had a wooden spire clad with lead, added in the 1160s. It was struck by lightning in 1169, less than two years after it was finished, so today’s spire dates from 1480. 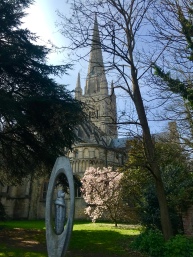 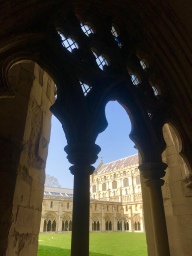 The cloisters of this very grand church bear a resemblance to the colleges of Oxford or Cambridge and are the second largest in the country after those of Salisbury Cathedral. A quadrangle is bounded by walkways featuring elaborate vaulted ceilings; inside, the cathedral itself is even more impressive. 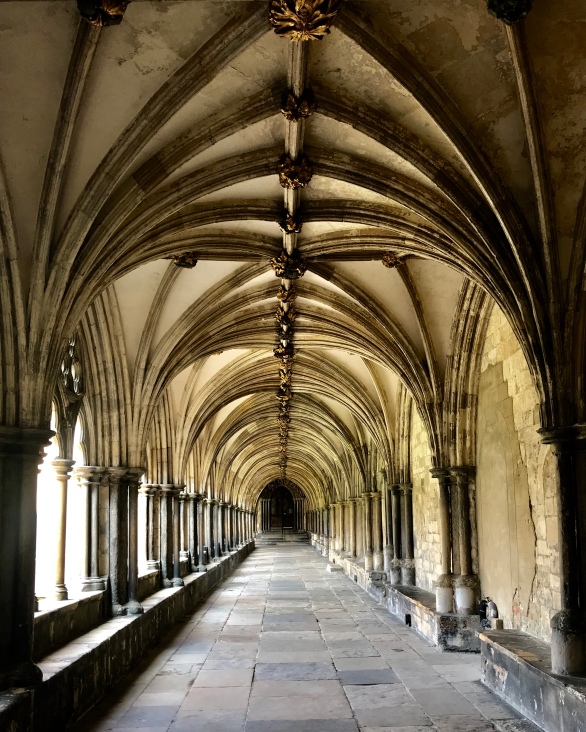 One of the more interesting modern additions is the copper baptismal font. Formed from two bowls, one upturned, it was donated to the cathedral when it was repurposed from its previous use – making chocolate in the Rowntree’s factory until it closed in 1994. Though a donation is suggested, entry is free. Allow plenty of time as the building warrants more than a quick look. 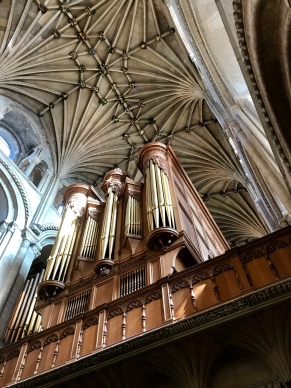 It was time for lunch and over on Tombland, Cocina caught my eye, two white statues flanking its doorway. Samson and Hercules are Norwich icons, though the figures that you see today are replicas, installed when the originals became too fragile to leave in place. In 1657, the two figures, both symbols of strength, were placed outside the home Christopher Jay, then the Mayor of Norwich.

The statues were removed from their pedestals in 1789 and reinstalled in the rear courtyard of the building; a century later antique dealer George Cubitt moved them back again. At that point, Hercules was in such a bad way he had to be replaced. In the 20th century, the building housed a dance hall and later a nightclub. In 1993, one of Samson’s arms fell off and years of paint were revealed. The two figures you see today might only have been placed there just before the millennium but are a much treasured part of the city’s history.

Taking a circuitous route to take in cobbled Elm Hill, my next target was the Museum of Norwich at the Bridewell. Whether you know a lot about Norwich or like me, embarrasingly little, it’s a fascinating place to spend a few hours. The £5.95 ticket charge is a steal. Originally constructed as the home of a rich merchant in 1325, it became a prison for women and beggars in the late 16th century (that’s what a Bridewell means).

The first inmate was one John Flowers, banged up for being accused of having “a lewd life and to be a counterfeiter of begging licences”. But the most interesting story was that of Jane Sellers. She was the Bridewell’s most persistent offender, serving nine sentences in just eight years in the early 17th century. Her first stint was for “being found idle at Trowse”. Several times she returned, did her time and promised to leave town to find work. But she never did. Instead she was caught stealing numerous times. The burglary she committed at the end of 1631 would be her last. The authorities lost patience with her and she was hanged. 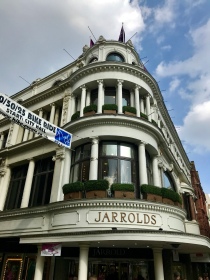 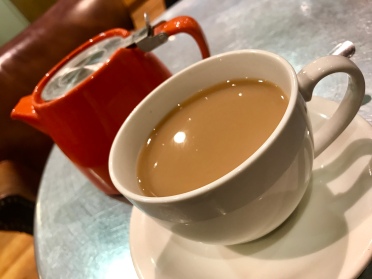 After a pit stop at Jarrold’s for tea, I set off for the Plantation Garden, pausing for a quick look at the city’s Roman Catholic cathedral along the way. The garden is the work of a dedicated team of volunteers. Occupying an abandoned chalk quarry, the garden is Victorian in origin, something you might guess from the many follies and statuary that litter the garden. There’s a gothic fountain, Italianate terrace and mock mediaeval terrace wall, plus delightful woodland walkways and vibrant flower beds. Judging by the many people who’d spread picnic blankets or settled into the benches for a natter, it’s well used by locals and visitors alike. A honesty box is located by the gate for your £2 entrance fee.

Back in the heart of the city, there was time for one last stop before I would catch my train. Norwich Castle occupies a hilltop site overlooking the shopping streets below. There’s a £9.50 entrance fee which is expensive, but I was told that for the final hour each day, you can get in for just £2. Inside, as well as an impressive keep, you’ll find a collection of exhibits, some temporary. Right now, there’s a Viking display which is worth a look, as well as a section telling the story of Boudicca, Queen of the Iceni. For me, the museum lacked the emotional connection I got with the Bridewell, but I’m a hard sell, much more interested in social and industrial history than that of early Britain. If you’re local and have kids, I think they might enjoy the castle’s Knight Club or some of the special Easter events that are planned.

If you’d like to have your own rail adventure, then why not take a look at Greater Anglia’s website? You could visit Norwich, but there are plenty more places that offer a great day out – read my previous blogs on Harwich or Wivenhoe, for instance. I’d also love it if you would answer the simple yes/no review on this survey – being purely selfish, if you’ve been inspired by my day out, I get to do another!