Should we adapt to a no-frills travel style?

The travel press is focusing on speculation concerning British Airways and its possible policy change in charging for food on short haul routes.  Read more about it here: http://www.telegraph.co.uk/travel/comment/british-airways-to-charge-for-meals-budget-airline/

Following the stratospheric growth of the low-cost sector, full service scheduled airlines have had to work harder to attract passengers whose prime consideration is price.  Living close to Stansted and Southend airports, it’s very rare for me to travel to Heathrow or Gatwick (or God forbid Luton during school holidays) unless I absolutely have to, so the likes of easyJet and Ryanair have been my go-to airlines for short hops for a couple of decades now.

Lithuania in the off season

Over the years, bargain flights have taken me to pretty much every country in Europe.  From Kaunas (Lithuania) to Malmo (Sweden), I’ve never let the fact that I’ve not heard of a destination stand in the way of a cheap fare.  And neither have I worried about the extras, happily paring down my luggage and printing off my boarding passes at home to avoid fees that some whine about.  If I can get halfway across the continent for thirty quid, then quite frankly I don’t give a stuff if they feed me or not.  It’s not like most airline food is anything to rave about.

So to be honest, I don’t really understand the fuss.  On the very short flights like, say, London to Amsterdam, cabin crew have to practically throw the food at you to get down the aisle and back before the fasten seat belt signs come back on.  If you’re only in the air for an hour, is it really so bad to do without a drink or a snack?  And if you’re that bothered, buy a bottle of water and a chocolate bar airside and take it on with you. 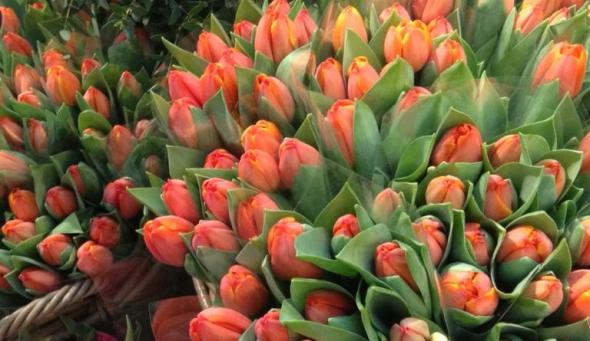 Tulips from Amsterdam, where they also sell food should you leave the airport hungry

I like these bargain basement fares – and who doesn’t?  I’ve never understood the logic in flying business class on short haul routes (they’re often the exact same seats for heaven’s sake!) or upgrading to speedy boarding (do these people not realise that the plane still won’t take off until the last person’s on too?)

I don’t even care who I sit with.  It’s nice to chat to my travelling companion but it’s not a deal breaker if I’m separated for an hour or two.  It even happened on my Wow Air flight to Iceland to get married, but then my fiance and I were the last to check in so it did serve us right.  Who knows, the person that has the pleasure of my company might be more entertaining.  (Apologies to those who are reading this having been a travelling companion of mine in the past – I don’t mean you, obviously.)

And therein lies my point.  The travel industry is evolving to cope with a changing economic climate and we need to adapt too.  The days of flying being a glamorous affair reserved for the rich and famous are long gone.  So ditch the suitcase, have a drink before you board and eat when you get there – no frills travel is here to stay!

This entry was posted on May 17, 2016 by juliamhammond. It was filed under Airlines, Travel advice and information and was tagged with budget airlines, full service airlines, no frills airlines.