Regular readers of this blog will perhaps remember that earlier this year I visited Norwich with Greater Anglia. I was pleasantly surprised at how fast the journey was from Colchester to Norwich – just over an hour – and blown away by how much there was to see and do in Norfolk’s county town. If you missed it, have a look at what I did here. One of the best parts of that visit was the Museum of Norwich at the Bridewell. The tales of some of the less respectable characters who once lived in the city were compelling. So when Kerri from Greater Anglia suggested I could go back and find out some more of Norwich’s history, I jumped at the chance.

I’m grateful to Greater Anglia for providing me with free train travel and also to KindaKafe for gifting me a complimentary ticket for their Hidden History tour. However, all opinions expressed in this post are my own. 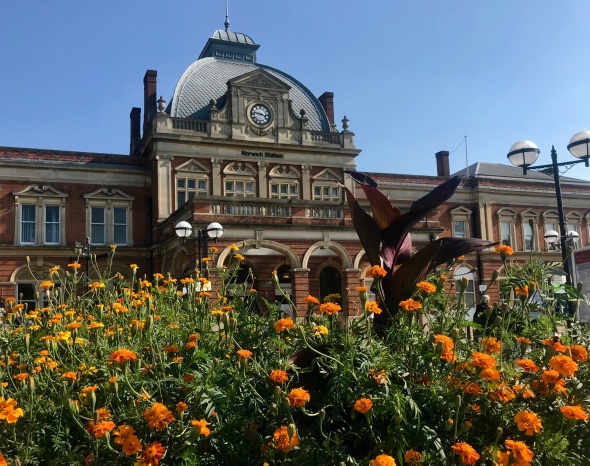 The day I’d chosen to go was a Bank Holiday Sunday, and coincided with Ed Sheeran’s triumphant tour finale in Ipswich. I was prepared to travel early, although extra trains had been laid on so it wasn’t difficult to find a seat. I was a little concerned I might not be able to park easily with the additional passengers but the GA website has a handy feature which provides live data about how many free parking spaces are left. There were over a thousand so I needn’t have worried.

I could sit back and relax in the spacious seat as well as say a silent thank you that on this very hot day, the carriage was air-conditioned. The train arrived a couple of minutes early at Norwich station, from where it was just a ten minute walk to KindaKafe, located opposite the castle in the building that once housed Ponds shoe shop. This cafe supports the important work of the Missing Kind charity, providing a social space but also raising funds through the events it holds. One such event is the Hidden History Tour which I had come to try out. There was just time for a quick coffee before Lisa, our guide, began her introduction.

The tour began at ground level in what had been the Ponds shoe shop. We learnt that Norwich was once second only to Northampton when it came to shoe production and especially important for ladies and children’s shoes. It was warm in the 19th century building, but soon we would descend below ground where it was a more pleasant 17°C. Things would soon get a little strange as we descended a flight of steep stairs to find ourselves in front of the upstairs window of what was once a weaver’s cottage. That window would once have looked out over the castle. Confused? Bear with me, this will make sense soon.

Norwich Castle was built at the time of the Norman conquest. At the time of its construction, an order was issued for all the buildings in the immediate vicinity – 98 of them – to be demolished. Once they were knocked down, an eight metre ditch was dug by hand. The soil that was excavated is what forms the castle mound today. 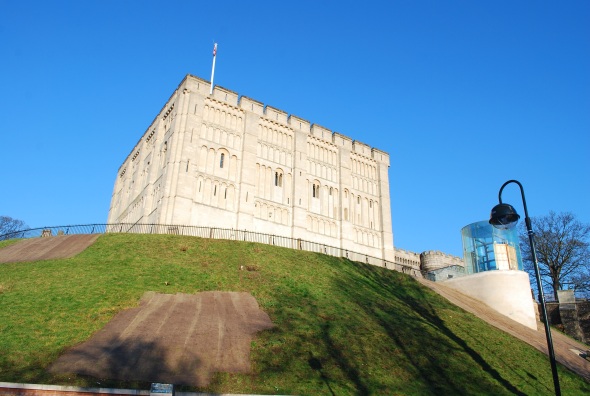 A couple of centuries later, King Edward III formally gave the ditch to the city, while the castle was county property. Lisa told us that this variation in ownership was important, for instance when it came to public hangings. If a murder was committed outside Norwich, the convicted killer would be hanged on Castle Meadow (on county owned land) whereas if the crime had taken place within the city, the place of execution would be Castle Ditch instead – right where we were standing. My mother had already told me that our family was connected to the final public execution:

“Hubbard Lingley was executed outside the Castle on 26th August 1867 for the murder of his Uncle Benjamin Black. Benjamin was the husband of Anna Fickling who was my great great grandfather William Fickling’s sister. They came from Barton Bendish.” 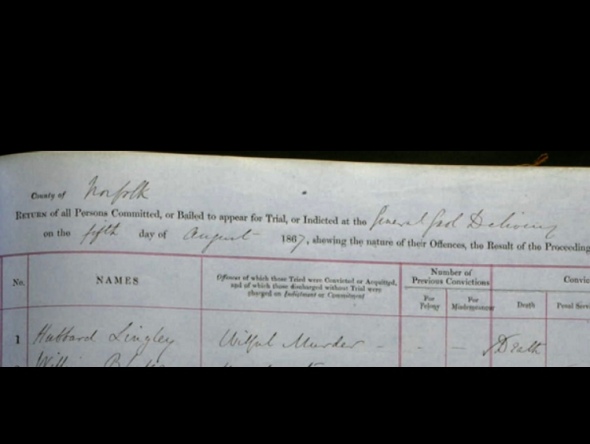 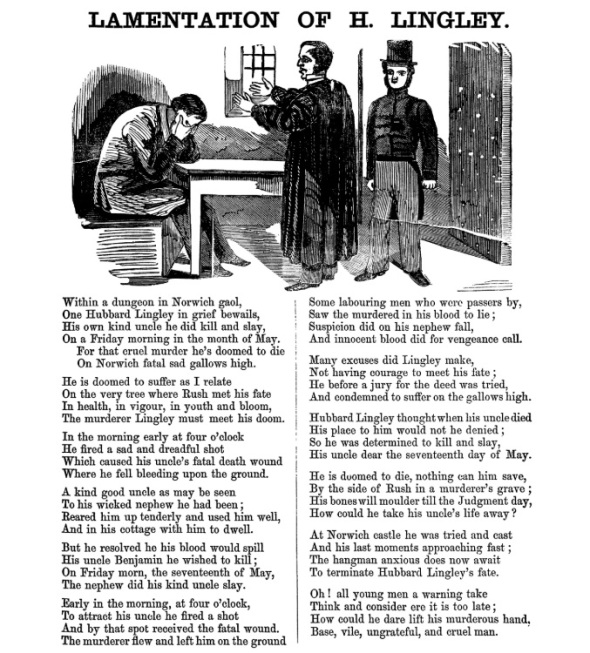 I shared this information with Lisa and the other group members – and it turned out that some of the other tour participants were related to Hubbard Lingley. Lisa told us that the reason that this was the last public execution (after this, hangings would take place inside the castle in private, rather than in front of a public crowd) was that there was some dispute as to whether Hubbard Lingley was guilty. Many in the crowd, she said, protested that he was innocent, and vented their anger at the hangman himself. The Capital Punishment (Amendment) Act was passed the following May and from then on, all executions would be carried out behind closed doors (though reporters and the victim’s family could be present at the invitation of the authorities).

After we descended another flight of steps, we learned that some people believe that there are secret tunnels leading to the castle. We could have been standing in one, but in actual fact, it was a former alleyway that had long since been covered over. Never mind about secret tunnels: it’s even more cool to think you are standing in a long lost street. Ponds built their shoe shop right on top of this ancient street and used the “basement” as a storeroom. Look carefully and there’s an odd mix of brick types, with elongated Tudor bricks and even a smoke-blackened section of wall, perhaps from a street fire. Lisa pointed out would could have been some 18th century graffiti featuring the number (or maybe a date?) 1739. 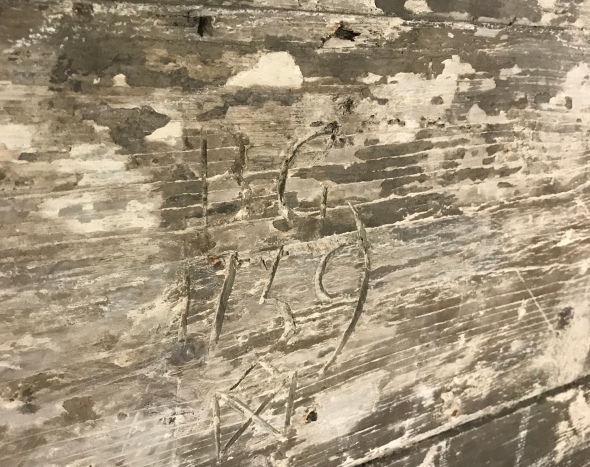 Looking around, we could have been in Harry Potter’s Diagon Alley. A “jetty” that would have been constructed across the street linked two buildings. Behind it was a section of wattle and daub ceiling. In front were two rooms: one had the appearance of a dungeon; the other had a flint wall dating from the late 15th century when Henry VII was on the throne. Opposite was a nook in the wall called an undercroft, a bit like a cellar. Norwich has at least fifty of these accessible undercrofts, more than any other city in the UK, and possibly as many as 250. These cool, dry spaces would be ideal for storing your perishable goods – cool in summer and not too cold in winter.

The group moved into one of these tunnels/covered alleyways. In the corner was an AUD (an anti-urination device). These, we were reliably informed, can be found all over the city. In the mid 1800s, there was a serious shortage of public toilets for the growing population. Mounds  were installed to discourage men from weeing up the buildings – the design was such that if someone tried to go to the toilet, they’d get wet feet.

Three flights of steps down from where we started, Lisa led us out onto the street. If you walk along London Street, between Costa Coffee and a chicken place you’ll see an unprepossessing white gate. I’ll bet almost everyone who walks by has no idea of what they’d find if they stepped inside.

If you’d like to have your own rail adventure, then why not take a look at Greater Anglia’s website? You too could have a day out in Norwich, but there are plenty more places on the network to choose from – why not read my previous blogs on Harwich or Wivenhoe for inspiration? 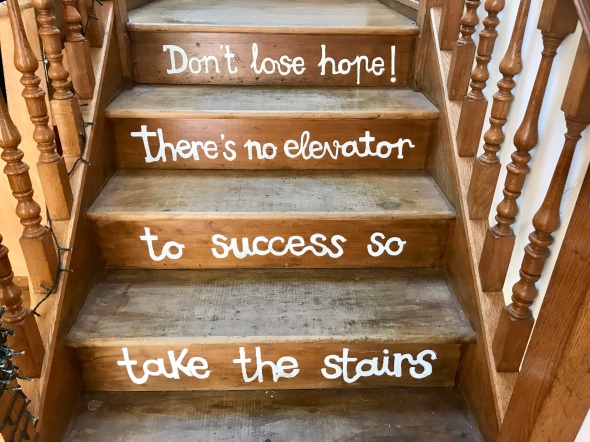 KindaKafe’s Hidden History tour costs £10.50 per person and I really recommend it. Advance booking is essential and for more information have a look at their Facebook page or call 01603 850309. All proceeds support the Missing Kind charity’s work.