Regular readers of this blog will perhaps remember how I enjoyed a trip to the Christmas markets in Regensburg, Germany last year.  If you’re looking for a German Christmas market destination, then I’d recommend this small city near to Nuremberg as the markets are compact yet very atmospheric, with one located in the grounds of the delightful Thurn und Taxis Palace.  I snagged flights with Ryanair for less than a fiver, making it viable both in terms of time and cost for a day out.

Copenhagen’s Christmas markets were also well worth the trip, with the Danish capital adding some Scandi style to the proceedings.  This year, I’ll soon be spending the weekend in charming Salzburg, Austria to see how they compare.  In the meantime, you can read more about Regensburg and Copenhagen’s markets here:

But what about the markets closer to home?  Can the UK compete?  A news feature on BBC Look East about increased security at Bury St Edmunds Christmas Fayre was not only reassuring but perhaps more importantly, brought the event onto my radar.  It took about an hour and a half to drive through some of North Essex and Suffolk’s most scenic countryside to reach the town.  At midday on the Friday of the Fayre, the Park & Ride was full, as were the town’s long stay car parks.  I began to wonder whether I should have taken the train, though it would have involved two changes and an extra hour on the return journey.  Finally, we were given permission to tuck the car into the exhibitors’ car park.  Was it worth the trip? 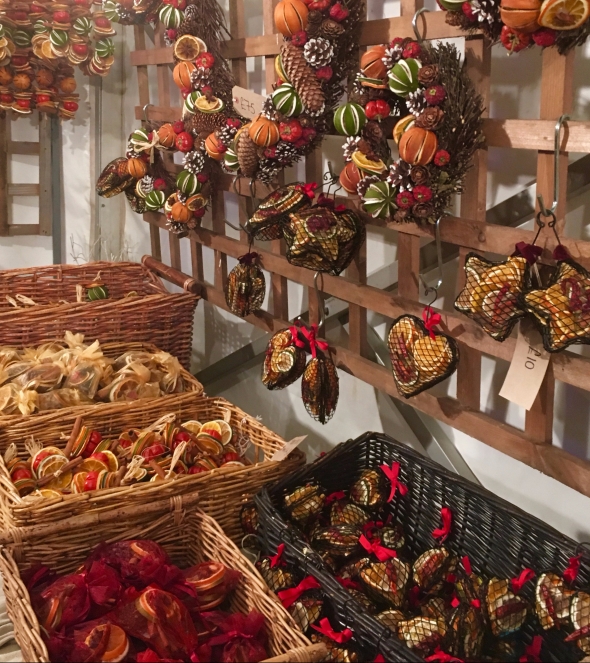 With around 300 stalls spread across several locations in the town, there was plenty to hold our attention.  In total, we spent around 5 hours at the Fayre, beginning in the pedestrian streets spanning Cornhill and Buttermarket.  Moyse’s Hall Museum, which focuses on local and social history, is worth making the time for. 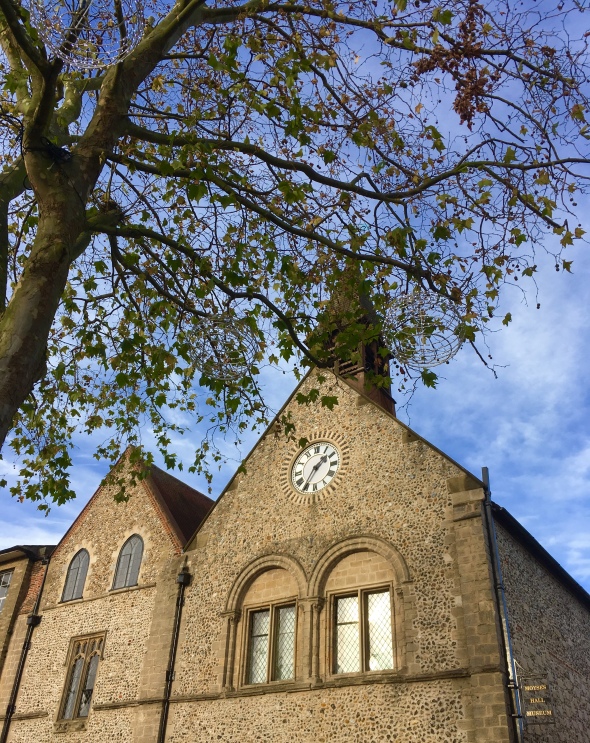 Outside the museum, we found several enticing food stalls, the best of which specialised in salami and sausage.  Purchase one in the bag.  Not far away, Just Our Stall, which has a permanent base in the town on St John’s Street, had a wide selection of sheepskins and farmed reindeer hides.  Prices were very competitive and quality was high.

From there, a stroll down Abbeygate Street led us via shops and cafes towards the Abbey itself.  Fairground rides and Santa’s Grotto would keep the kids happy.  Inside, we were disappointed at first to find that there weren’t as many seasonally-themed traders as we’d imagined, though once we got to the reindeer pen, things got a lot more Christmassy.  One of the two reindeer wasn’t too keen on remaining in the pen, attempting to climb out when someone produced a carrot.  He was a real character.

Through the Abbey gate, the concentration of stalls selling Christmas gifts and decorations was higher, making this our favourite part of the Fayre.  Stand out traders, for their sense of humour as well as their product range, included HaGA Lifestyle which enthusiastically embraced the Danish concept of hygge.  Locals will be aware that their regular base in Eastgate Street has an excellent cafe, a deli and also offers dog grooming. 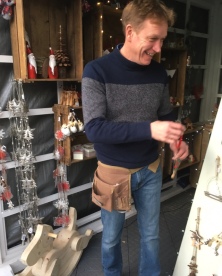 The Once I Was stall also brought to mind the recycling theme I’d seen in action in Copenhagen.  Each of the products had previously been something else before being repurposed for use in the home.  Tealight holders, chopping boards and Christmas decorations had been fashioned from drawer fronts, fence posts and sheets of plywood.  Also worthy of a mention is The Crafty Foxes.  Based in Queens Road, they offer craft workshops.  Here at the Fayre, they had a range of gift bags for sale which made excellent stocking fillers, as well as some rather unique Christmas tree decorations.

Food stalls were in abundance and there were some tempting and very festive offerings from which to choose.  In contrast to the European markets, however, there was a lack of seating nearby, which meant either standing around or walking around with food and drink.  Hopefully, that’s something which St Edmundsbury Council might consider for next year. 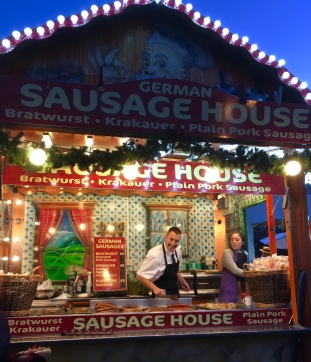 As the sun set, the festive atmosphere ramped up a notch.  There hadn’t been time to duck inside the Athenaeum for the indoor stalls or catch one of the cookery demonstrations in the Cathedral Courtyard.  Walking back to the car, we reflected on what an enjoyable afternoon it had been and well worth a return visit.