A beginner’s guide to Alberobello

Puglia is Italy’s heel, where a karst landscape makes its presence felt in the form of caves and sinkholes. Somewhere in the middle of all that is Alberobello, a town known for one thing: trulli. These simple circular dwellings are built without mortar and take their name from the Greek word “troullos” meaning dome. 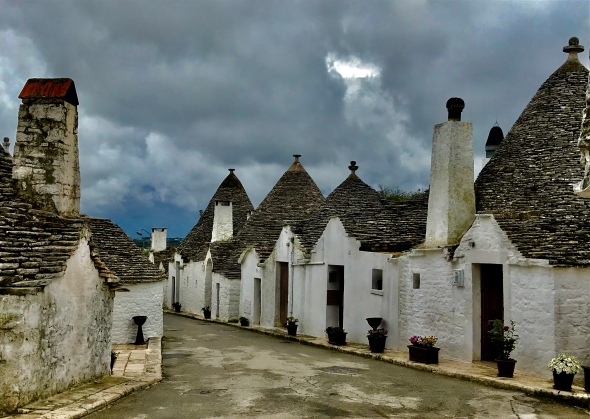 The nearest airports to Alberobello are Brindisi and Bari. The latter’s the most convenient in terms of onward travel, served from London Gatwick, Stansted and Luton by easyJet, Ryanair and Wizz respectively. Flights can be had for a little under £50 return, excellent value for a flight that’s almost 3 hours long.

From Bari, a train takes you direct to Bari Centrale station, taking about 20 minutes. From there you can pick up the FSE train, tucked away on a far-flung platform – ask for assistance if you can’t find it. Even though it’s an FSE train, you can buy a ticket from the Trenitalia ticket machines (Trenitalia bought FSE in 2018). The fastest connection takes about 1 hour 15 minutes, but it’s more usually about an hour and a half. Tickets are cheap at just 5€ and can be used on any train without the need for a reservation. At the moment, until at least 2020, the stretch of track from Putignano to Martina Franca is being renovated, so there are no trains to Alberobello itself. Instead, you need to catch the connecting rail replacement bus – and fortunately it does connect, waiting for the train if the train is running late. It’s part of the same 5€ ticket, so just show the driver. The bus journey takes about half an hour.

On Sundays, things get a little more complicated. FSE trains don’t run at all. Instead there is a bus service that connects Alberobello to Bari Centrale. Though that might sound simple, the bus doesn’t start from the station. Instead, you’ll need to find the stop – tucked around the corner on Viale Bari near Hotel Astoria and the petrol station. Remember to buy your ticket online or at the petrol station; you can’t buy a ticket on the bus from the driver. 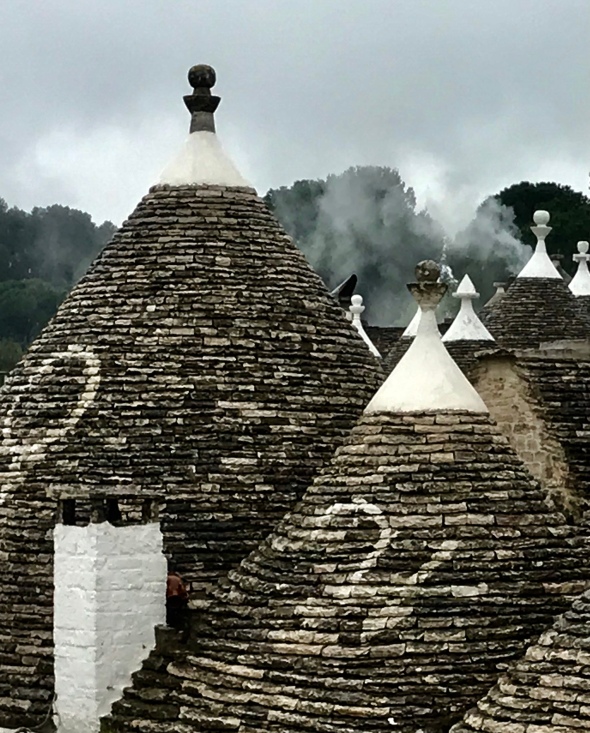 To explore the surrounding countryside, it’s most sensible to hire a car. Though public transport does exist, it radiates from Bari and other large towns and there are few cross-country connections. To visit Matera by public transport, for instance, would require a trip from Alberobello to Bari and then out again to Matera – a long detour.

However, it is possible to catch the train (or Sunday bus) to some of the nearby villages. I enjoyed Locorotondo, the next village along, which is a pleasant outing for the afternoon. There aren’t many sights as such, but the hilltop location affords fantastic views across the surrounding countryside and the pretty old town is compact as a result.

The big draw when it comes to Alberobello is Rione Monti. This district is packed with trulli and straggles picturesquely up the hillside. One of the best views across from the town centre is at the Belvedere Santa Lucia. It’s also worth checking out the park beside the tourist information centre and, across in Rione Monti itself, several shops that offer free access to their upstairs terraces. 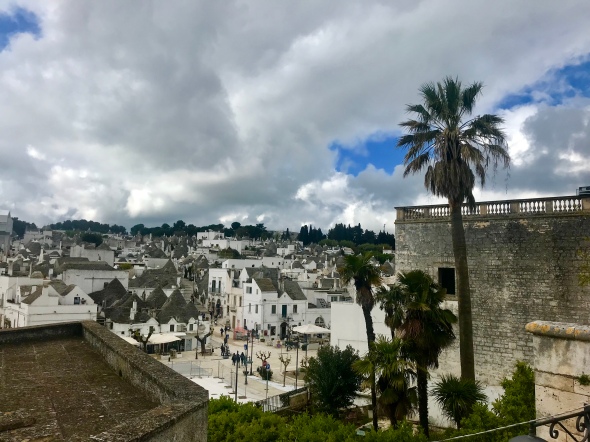 Close up, it’s not quite as quaint, largely because many of the trulli house souvenir shops – some of which is mass produced tat. A few stood out, including La Bottega dei Fischietti which sells not only the traditional ceramic whistles common to Puglia but also some rather lovely ceramic tableaux. 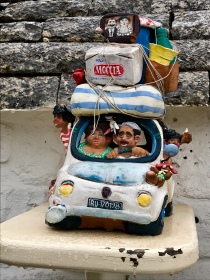 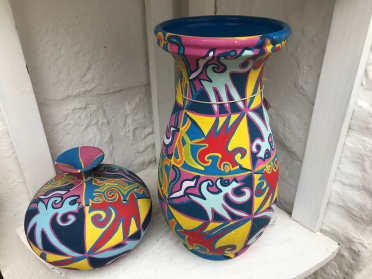 Nearby, Pasteca La Mandragora sells high quality linens and there’s also a store to delight art lovers called Forme e Colori di De Marco Vita crammed full of brightly painted pottery. Be warned, however, some places that purport to be museums house a minimum of exhibits which exist as a honey trap for unwary visitors. 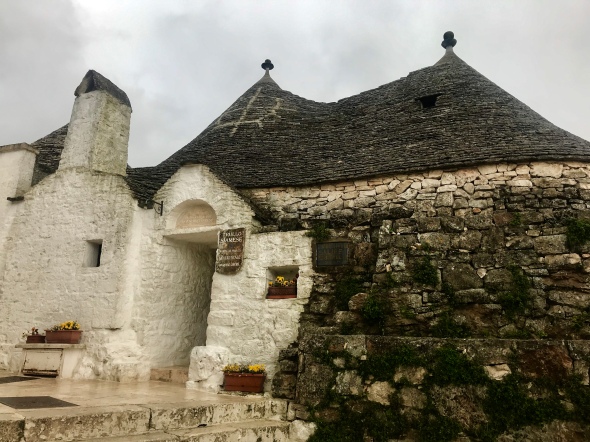 But it’s also in Rione Monti that you’ll find a 20th century trulli church and where you’ll find the curious Trulli Siamesi. This double trulli has one roof. Legend has it that two brothers fell out over a woman but neither would give up the home they had inherited. Instead of moving out, the spurned sibling bricked up the wall and knocked through to make a separate front door. 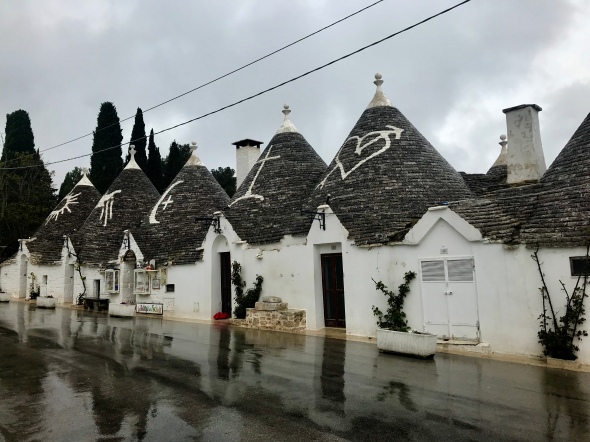 You’ll also see plenty of trulli with symbols painted on their roofs. Some people will tell you that these symbols have an ancient spiritual or religious meaning. That’s probably true, but I also read on an exhibit tucked away in a corner of the town’s museum that when Mussolini came to visit in 1927 many of the villagers were asked to paint those symbols on their trulli to add a touch of mystery. This seems to be glossed over now in favour of the more politically correct religious imagery line.

The only district to rival Rione Monti in terms of the sheer number of trulli is Rione Aia Piccola, which faces off against its nemesis across Largo Martellotta. In contrast to its touristy neighbour, it’s quieter than you’d expect from somewhere on the tour guide route. Many of the trulli here are private dwellings, though a significant number are let to visitors. You’ll see just how many if you wander through in between check out and check in, when they’re marked by vacuum cleaners and mops on their thresholds. 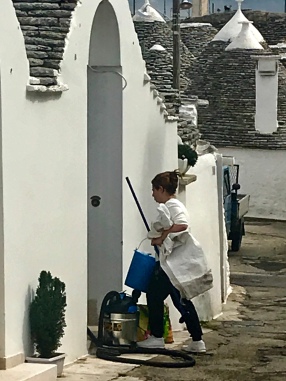 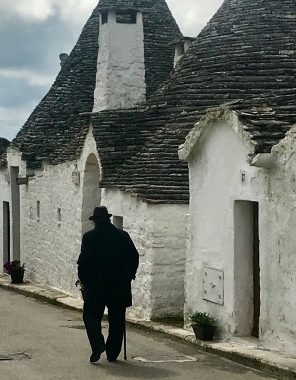 A tourist map I had been given implied that there was a kind of open air museum here, but there was no evidence of that during my stay – perhaps because it was still early in the season? If you are in Alberobello in the height of summer it would be worth checking out just in case. 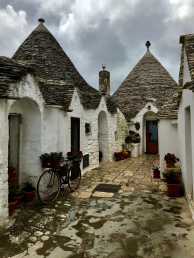 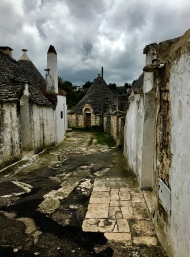 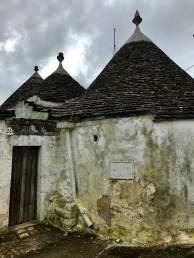 In the main part of town, there are also more than a scattering of trulli, one of which is worth seeking out as it is two-storey. This is rare: Alberobello’s trulli were originally modelled on the agricultural buildings found across the Puglian countryside and the dry stone wall construction wasn’t strong enough to support an upper floor. 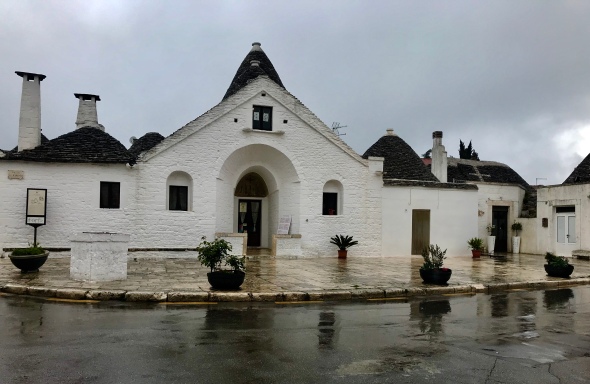 Trulli Sovrano was built in the 17th century by the family of a priest, taking the name Corte di Papa Cataldo and is now a museum, its rooms recreated with antique furniture. In the front bedroom, a notice pinned to the wall states that the slit was useful for seeing who was at the door, or shooting them if they weren’t welcome. It was at one time a warehouse; if you climb the stairs, you’ll see a trapdoor in the floor used for passing goods down to the floor below. Over the years it’s had many uses, including a court, chapel, grocer’s, monastery and the HQ of the Brotherhood of the Holy Sacrament. 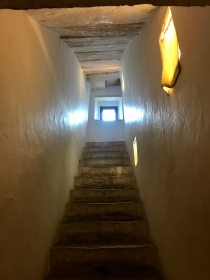 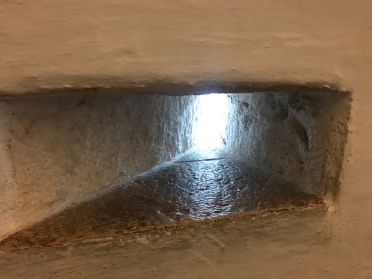 Much of the town’s history can be learned within the confines of this collection of fifteen or so trulli which now form a museum. It recounts the impact of the Prammatica De Baronibus, an edict of the 15th-century Kingdom of Naples. The Kings wished to impose a tax on permanent dwellings, so under the leadership of nobleman Gian Girolamo II, the residents of Alberobello were forced to live in trulli. Their dry stone construction made it easy to take them down if an inspection was imminent. The tax dodge worked, serving Alberobello well for many years but in the end, the political situation changed and thus these temporary structures became an enduring part of the urban landscape. 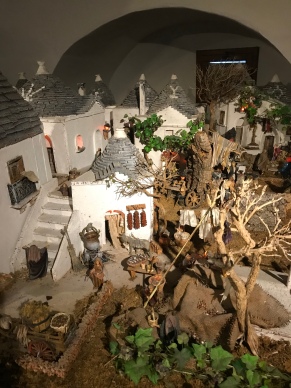 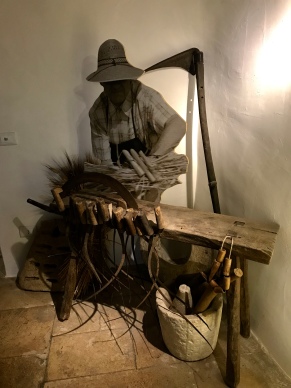 One of the sections of the museum explains the significance of the adornments on the roofs of the trulli. What’s called the “pinnacolo” is the only part of the trulli to be purely decorative, a kind of architect’s calling card. The more complex the design of this topper, the more talented was the master trullaro. It was also a good way of finding a particular trullo amongst so many similar constructions; think of it as the design equivalent of a postcode. 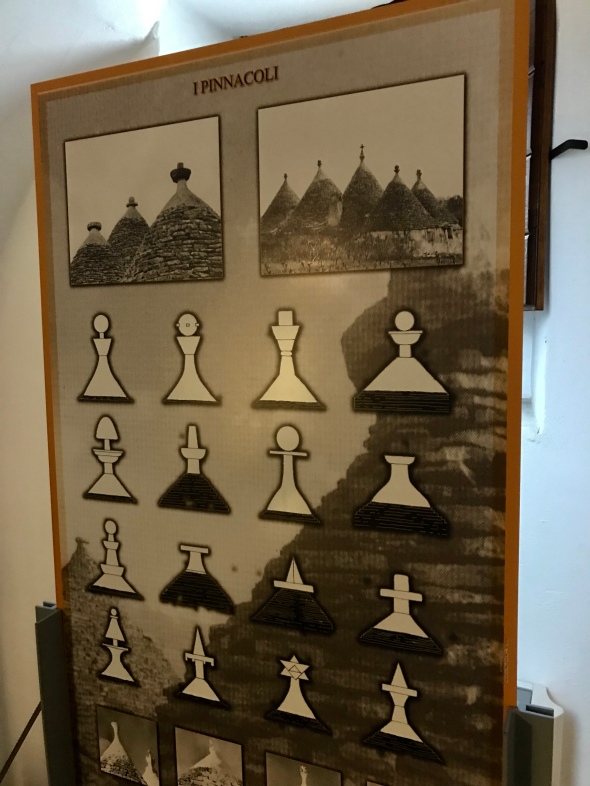 If you’re going to stay in Alberobello – and why wouldn’t you, since once the daytrippers have gone home it’s absolutely gorgeous – then I’d suggest you book Trulli Anti. 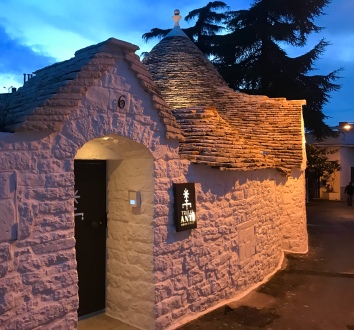 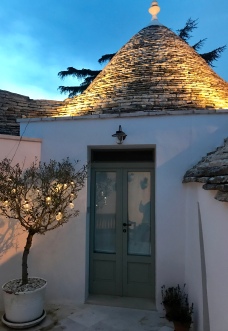 While there are plenty of trulli scattered across town that can be rented by visitors, many of them cluster in Rione Aia Piccola. Though that district isn’t as plagued by tour groups during the day as Rione Monti, it’s still on the tourist trail. Where Trulli Anti wins is that it’s close to the sights without being in the middle of them. Plus it’s on such a narrow road that it’s almost impossible for cars to drive past. I only saw one car try it and that was the local police. 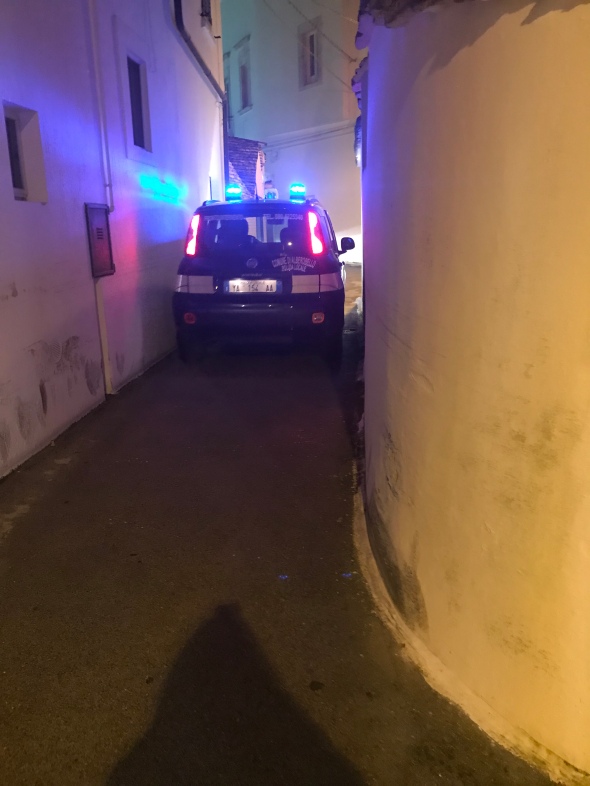 That peace and quiet, coupled with its stylish and very contemporary design, gives it 10/10 in my books. If you’re thinking that I’m only saying that because I got a freebie, I didn’t. I paid my own way. It wasn’t cheap for a solo traveller, costing about 125€ a night – though it would be much better value if there are three of you. But oh was it worth it!

The trulli has been well thought out and owner Angelo is keen to ensure you have a great time. On a mezzanine, there’s a very inviting double bed under the domed roof. Lighting is good, and the stairs are pretty solid, which is reassuring as the bathroom is downstairs. That bathroom is chic – I especially loved the tiles and having a shower with some oomph to it. I also need to mention the comfortable sofa (so comfortable I fell asleep on it one evening) and that there’s a single room on the ground floor if you need a second bedroom or you’ve had so much vino you don’t trust yourself on the stairs. 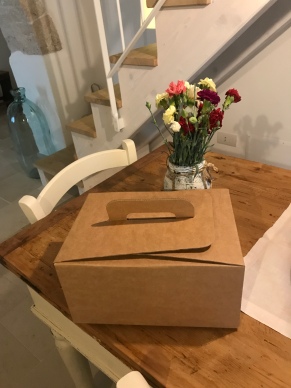 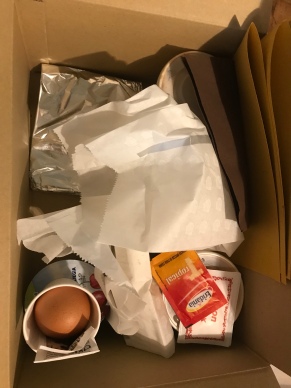 If you plan to cook, there’s also a small but well-equipped kitchen with a dining table. When it comes to eating out, Angelo provides many recommendations and there are several excellent restaurants within staggering distance. Call ahead if you want to try La Cantina as it’s tiny and usually booked out. I had better luck geting into Trullo d’Oro and the food there was delicious. Make sure you try burata, a type of mozzarella that is moist and creamy. Breakfast comes in a box from a nearby cafe, with plenty of choice. You simply pick what you’d like off a menu, send it to Angelo via text message or What’s App and tell him what time you’d like it delivered. You can, if you prefer, eat at the same cafe, a ten minute stroll away. 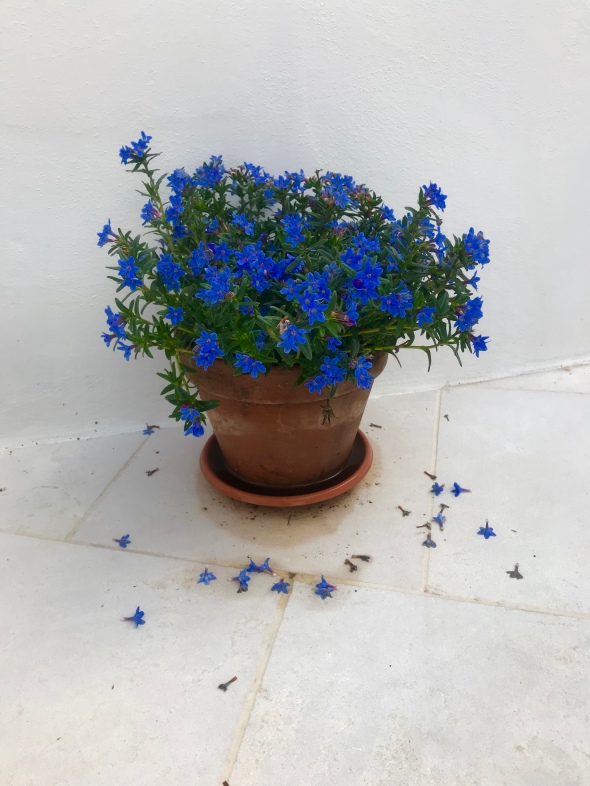 Out back there is a courtyard garden. During my stay the weather was rarely sunny, but if it hadn’t been wet I’d have loved sitting out there. Angelo supplies bikes too and there’s even an outdoor shower. Pots of flowers add colour to the whitewashed trulli and fairylights create a magical feel. I’m probably gushing, but it was just delightful. Trulli delightful, in fact. Sorry, couldn’t resist.

I booked Trulli Anti via booking.com – here is the link if you want to check prices and availability: https://www.booking.com/hotel/it/trulli-anti.en-gb.html

This entry was posted on May 4, 2019 by juliamhammond. It was filed under Destination information, Europe, Independent travel, Italy, Travel guides and was tagged with Alberobello, Beginner's guides, Italy, Puglia, stay in a trulli, trulli, where to stay in Puglia.