A January daycay: just the thing to banish those winter blues

Do you suffer from the winter blues? If you do, this month’s hell. Without Christmas lights to lift the spirits – excepting the neighbour whose outdoor tree will be a beacon of defiant brightness until the temperatures rise in the spring – the long hours of darkness can seem endless. If there’s a rare blue sky to tempt us to take a walk (it’s free and healthy after all!) it’s accompanied by a merciless cold north wind that defies the toughest hat, gloves and winter coat combo. The Arctic has nothing on the damp, seeping cold that whips off the North Sea in January while I’m stood waiting for the dog to finish his interminable sniffing. The sales are on, but there’s no longer anything worth buying, and even if there were, we couldn’t be persuaded to drag ourselves off our sagging sofas to investigate, such is the pervasive lethargy that blights January. Yet throughout this, our TV screens are awash with adverts featuring smiling families in sun-drenched locations having the holiday of a lifetime. It’s like a parallel universe, designed to torment us while we wait for our January paychecks and lament how our less than perfect life fails to measure up to that depicted by TUI.

Yesterday I escaped from all that, just for the day.

Despite living out on the Essex coast, it’s an easy run into London thanks to the swift and reliable service from Greater Anglia trains. This time, in preparation for the day ahead, I made a point of stopping by the Kelvedon station book exchange to pick up some reading material. It’s not often I have the luxury of curling up with a book on a working day, so this would be a real treat.

It was bliss. I spent the day trialling a new concept, a daycay, and it was just the thing to banish those winter blues. My day stay at the stylish Trafalgar St James in the heart of Central London had been arranged by DayBreak Hotels. They specialise in providing accommodation that would otherwise go to waste. Think about it: occupancy rates are lower than average in the UK at this time of year. Factor in that many people check out early and check in late, and you have hours and hours in between where those beautiful hotel rooms sit empty.

In the award-winning and recently refurbished Trafalgar St James, I was allocated a junior suite, complete with a comfy sofa looking out over a sunny Trafalgar Square and an even comfier bed promising to help rid my face of the grey skin and black circles that had settled in over Christmas. Watching from above the pillow was a black and white photograph of a youthful looking Mick Jagger, one of many in the hotel to be taken by acclaimed celeb photographer Dave Hogan. 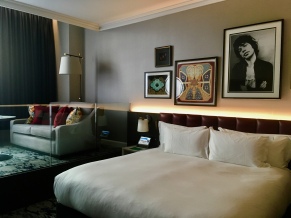 The room was thoughtfully equipped, the attention to detail marking it as one of Hilton’s prestigious Curio Collection properties. Waiting for me, I found a Nespresso coffee machine, a book on London’s curiosities and a selection of glossy magazines, as well as a plate of melt-in-the-mouth macarons beside a welcome note.

There were a selection of Molton Brown toiletries lined up in the spotless bathroom and a couple of inviting dressing gowns hanging in the wardrobe. This was like a home away from home, but unlike home, I didn’t feel guilty that I wasn’t doing the hoovering or clearing away the dishes.

You might expect that as you’ve only checked in for six hours you might not be treated with the same respect as an overnight guest, but you’d be wrong. Every interaction I had with the hotel’s staff, from the receptionist to the restaurant servers, emphasised the close attention paid to customer service. I was offered a tour of the hotel, the highlight of which was enjoying the views from the rooftop terrace. The rooftop spaces make great entertainment venues; if I wasn’t a freelancer I’d already be bombarding my boss with emails about where to hold next year’s Christmas party.

I was also invited to see one of the suites that used to be one of Cunard’s corporate offices. The Landseer Suite was occupied, a minor disappointment as this was the boardroom where Cunard first received word of the sinking of the ill-fated Titanic. Next door, I did get to look around the Barry Suite, its original woodpanelling preserved under a coat of contemporary matt grey paint. It managed to be grand without being stuffy, the kind of place that makes you want to pop in to John Lewis on the way home to buy a few more cushions to spruce up your own place.

The hotel strives to be innovative – there’s not a hint of a bland, corporate hotel chain here. I found that also to be the case with afternoon tea. The dining room will shortly close for refurnishment, but the untrained eye would never guess. I was presented first with a menu of teas from the Tregothnan Estate in Cornwall. I had no idea that we even grew tea in this country and made a mental note to check that place out next time I was in the West Country. My question – was the rose tea better, or the red berry? – was met with the best possible answer – why not try both? (I did, and they were both a treat.)

The savoury treats were presented next, each accompanied by the Molton Brown scent that had inspired them. Coastal Cypress & Sea Fennel was represented by a slice of compressed cucumber topped with pieces of fennel crisp. Carpaccio of Denham Vale beef with pink peppercorn gel on sourdough toast exemplified Fiery Red Pepper. Following this were scones with jam and clotted cream, pleasantly warm and surprisingly filling. The patisserie was equally as inventive. A rose and rhubarb pastille was bursting with flavour and a mouthwatering prosecco sabayon with watermelon and berries decidedly moreish. My favourite Molton Brown aroma, orange and bergamot, came in the form of a chocolate and Earl Grey eclair topped with tiny strips of candied orange.

There was barely a crumb left by the time I’d finished. Had I not been in public, I’d have been tempted to lick the plate. With an hour and a half left on the clock, I chose to return to my room for a profligate nap. London, with its galleries and museums and countless other attractions, would have to wait. After all, it’s not every day a girl can say she fell asleep under the watchful gaze of Mick Jagger, is it?

Daybreak Hotels offer a range of properties in destinations across Europe, the Americas, the UAE and Australia. The daycay concept is a clever one, with daytime and evening slots available. Same day and advanced booking as well as special offers can be found on their website:

There are so many reasons why you might book a hotel for the day instead of the night – perhaps you’re looking for a comfortable place to shower and change before a posh night out on the town or somewhere to relax before an evening at the theatre. Perhaps like me, you’re tempted by the promise of an indulgent afternoon tea or need a winter pick-me-up without the expense of a full-on holiday. Some properties come with spa or pool access, making them a great choice if you’re in need of a little pampering.

Maybe you could make use of a convenient city centre base for a sleepy toddler to have a rest in between seeing the sights? Or how about a place to leave a grumpy husband in the ultimate man crèche while you potter the shops at a leisurely pace? Also, there are plenty of hotels on DayBreak’s books that are conveniently located on or very close to airports, ideal for a lengthy layover – and far nicer than hours spent in an airport lounge. Whatever your reason for booking, the daycay concept is one worth checking out.

I was a guest of DayBreak Hotels and benefited from complimentary travel with Greater Anglia. To both: many thanks for your generosity.

This entry was posted on January 23, 2019 by juliamhammond. It was filed under Day trips, Destination information, train travel and was tagged with daybreakhotels, daycay, London day out, train travel, what to do in London for a day.