A day with the steppe nomads

My back jarred with every rut.  The small Japanese saloon was poorly suited to Ulan Bator’s potholes, let alone the enormous bumps and holes over which we creaked in the Mongolian countryside.  It was clear that at some point, the arid steppe climate had experienced some rain, and the trucks and 4x4s that had come before us had churned the mud into deep and now rock solid furrows.  Having spent two nights tossing and turning on the train from Irkutsk, and a good nine hours hanging around at the border, I was beginning to wish I’d taken my chances with the pickpockets of UB (the guide book’s judgement, not mine!) and not been in such a hurry to get out of the city.  It had its advantages though.

A 40-metre high statue of Chinggis Khan an hour or so out of the city posed serenely in the early morning dawn, awaiting its hordes of visitors once they had prepared their picnic lunches.  We paused briefly to admire it by the roadside before moving onwards to tangle with a stray herd of cattle.  After two hours, we reached the Steppe Nomads ger camp, where my Italian travelling companions alighted.  For me, a half an hour jaunt across the fields would take me, jolt by painful jolt, to my nomad hosts, with whom I would stay the night.

The setting was idyllic.  Enormous blue skies dwarfed the gers, the traditional Mongolian felt tents, perched halfway up the field; scrubby meadows led enticingly to deceptively distant mountains.  I took in my immediate surroundings.  Four gers, a 4×4 and, underneath the latter, three dogs snoozing in the early morning calm.  A short way up the hill was a rustic corral containing a few horses, downhill, a couple of small paddocks for sheep and goats.  In the distance, cows and horses roamed free, down by the River Khergen.  A couple of other gers and a truck back the way I’d come completed the picture.  It seemed wonderfully simple compared to the complicated life I lead back in the west. 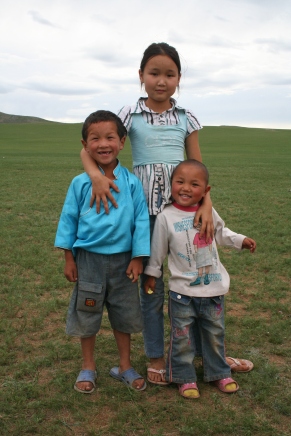 The guest ger was beautifully decorated.  Intricately painted designs on orange woodwork contrasted with the faded cream canvas of the ger’s exterior.  Hot pink beds with carpet mattresses were pushed to the edge and a matching dressing table was festooned with family photos and mementoes.  It seemed to me a fairly comfortable introduction to camping!  My driver indicated that the small structure across the field that looked like a British Telecom workmen’s cocoon was actually the toilet.

On closer inspection, the structure was tall enough to provide sufficient privacy, the boards firm enough to avoid any hapless falls and there was even a shovel and some loose dirt by the side for me to cover my tracks.  Having a wash was going to involve several kilometres of trekking down to the river, but I figured I’d already had two shower-free nights on the train, and, let’s face it, the horses weren’t likely to complain.  I felt very smug.

And then I was served breakfast.

I struggle with a piece of toast some mornings, so my traditional Mongolian breakfast of sick on a plate was hard to stomach.  In actual fact it was some kind of curd cheese, and to some palates, delicious I’m sure, but, for me, that morning, it was sick on a plate, served with small finger shaped pieces of lardy bread.  The cinnamon tea was lovely though, so I drank plenty of that, forced down some bread and sick and finished off with a caramel flavoured boiled sweet which had been thoughtfully provided in a small dish.  I felt terribly guilty for struggling with the food, as it was served by a delightful nomad lady with a squeaky voice and a smile as broad as the Gun Galuut horizon. 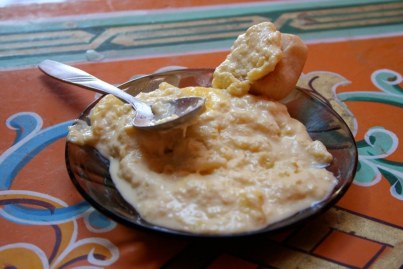 After breakfast, I grabbed my camera and headed up to the corral to watch the horses.  I envisaged lounging by the fence, channelling Kristin Scott Thomas in the Horse Whisperer.  Unfortunately, unlike in the States, these poles were not fixed and periodically they would be charged by the horses before they made a break for freedom and hurtled down the field.  Not wishing to be trampled, but still wishing to be close enough to secure some decent shots, I kept one eye on the action and the other on the camera, as poles cascaded down around me.  The young men of the nomad group had the difficult task of roping the horses and fitting their bridles ready for the tourists at Steppe Nomads to ride them later in the day.  It was certainly no easy task.  Even with their dexterity, lassoing the only semi-tame creatures was no easy task, and the animals’ mad eyes and toothy grins only served to add to the humour of it all from the bystander’s point of view.  Many times I watched as the horses bolted and their would-be captors rode expertly after them to herd them back up the field.  I’m not sure I would have neither such patience nor the perseverance, especially whilst being watched.  I was reassured to see that the young girls at the nomad camp thought it was as funny as I did, much to the lads’ embarrassment.  Eventually, to the relief of all those involved, sufficient horses were roped and galloped down the field at an impressively fast pace to meet their excited riders. 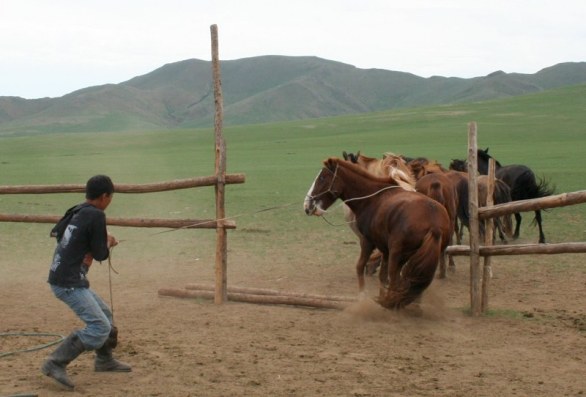 Watching the action is all very well, but I felt a bit uncomfortable being the outsider, and so came ten year old Tilly to the rescue.  Her name was something much longer and infinitely more unpronounceable, so Tilly was settled on as a name we both could manage.  Tilly set about making it her mission to teach me to play volleyball.  “Gee-oo-lee-aah!” she would cry, lengthening my name so much that it seemed I had been re-christened especially for Mongolia.  At regular intervals throughout the afternoon, she would call for me, and we would continue with her attempts to refine my awkward technique.  “Yee-ess.  Verrry good!” was the response I hoped for, though more often than not, she just collapsed in a fit of giggles and ran down the field after the stray ball.  It was an ice-breaker, nevertheless, and I was soon adopted as the new friend, someone to show off to (but not to share with!) her younger brothers.  Before I knew what was happening, I was carted off the field to help milk the cows.  The nomad women (and tiny infant children!) made it look simple, but for me, the hardest part was balancing on the tiny wooden milking stool without toppling over and falling into the freshly dropped manure.  Once I’d mastered that, milking was easy – if a little messy.  Much the reverse of volleyball, it seemed. 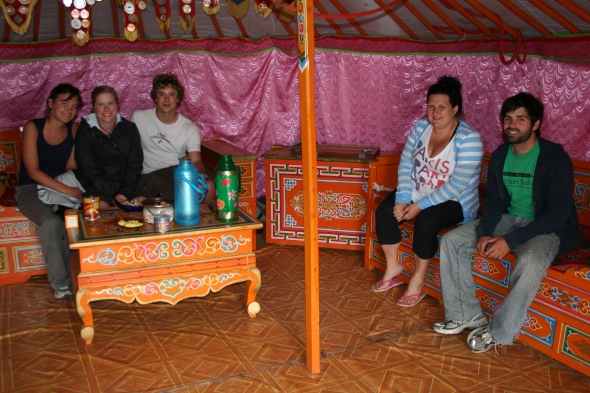 By the time the tourists came up to visit on their horses, the latter looking much tamer than they had that morning.  The Italians looked a little uncomfortable and slightly saddle sore.  It seemed like forever since I had left them this morning and I was surprised at how easily I’d settled in to such an alien environment.  Dinner was brought out – a watery but delicious mutton stew – and I savoured every mouthful.  I helped to unload two horses from the nomad’s truck and watched, toddler on hip, as the farmer administered some medication.

Later we sat, watching the sun set and the stars brighten in the blackening sky, smiling contentedly and watching the animals settle in the paddock for the evening.  It was clear to see that this was a tough life, but the community was close-knit, the scenery was world-class and I had laughed more than I had for a long time.  Shower aside, did I really need any more than this?

This entry was posted on September 27, 2018 by juliamhammond. It was filed under Asia, Destination information, Independent travel, train travel, Travel guides and was tagged with best place to visit in Mongolia, ger, Mongolia, steppe nomads, Trans Mongolian, Trans Siberian stopover, what's it like to sleep in a ger?.