I’m not Asia’s greatest fan. Though you’ll find some of the world’s most fascinating natural and cultural sights, I find it irritating that they’re buried amidst jumbles of telephone wires and that reaching them often involves darting out in front of more motorbikes than it should ever be possible to encounter on one road. Nevertheless, I enjoy reading about the place, when I can filter out the bits that I don’t like to be left with a vibrant and enticing locale. There are exceptions, however, and one is most definitely Sri Lanka. I visited last year and cannot wait to return.

It’s perhaps no surprise, therefore, to learn that one of my choices is a work of fiction. The story is enthralling but most of all, it captures the essence of the country in which it’s set. Here’s one of my favourite descriptions from the book:

“She took a deep breath of what she’d expected would be salty air, and marvelled at the scent of something stronger than salt.
“What is that?” she said as she turned to look at the man, who, she rightly sensed, had not shifted from the spot.
He paused and sniffed deeply.  “Cinnamon and probably sandalwood.”
“There’s something sweet.”
“Jasmine flowers.  There are many flowers in Ceylon.”
“How lovely,” she said.  But even then, she knew it was more than that.  Beneath the seductive scent there was an undercurrent of something sour.
“Bad drains too, I’m afraid.”
She nodded.  Perhaps that was it.”

For some reason, though this scene takes place in Colombo, it feels to me like it should be set in Galle Fort. Quite possibly that’s because I grabbed the first train out of Colombo to head for the hill country and quite possibly because Galle Fort oozes history, spice and sewage from every cobblestoned street.

Hokkaido Highway Blues by Will Ferguson

My next choice focuses on an Asian country I also love: Japan. Travelling through Japan ought to have been a challenge, what with the different alphabet and all, but the Japanese go out of their way to make sure they can understand you, even if the conversation can get a little stilted. Here’s the author on the art of Japanese conversation:

“This was conversation by Non Sequitur and I was thoroughly familiar with it by now. The trick was to answer with equally arbitrary statements, until you sound like a couple of spies conversing in code.
“Yes, I can eat Japanese food. Baltimore is very big.”
“How long will you stay in Japan?”
“Until tomorrow, forever. It is very cold in Baltimore.”
He shook my hand. We smiled warmly at each other, clearly this was an International Moment.”

Fortunately, when I reached Kyushu, the lady in the tourist office at Yanagawa defaulted to technology when she realised our language abilities were sorely lacking. Video conferencing with a disembodied head on her computer, I was able to secure a map and a recommendation for lunch. The head seemed very disappointed that I had no further questions and I felt guilty as I thanked it and headed off. 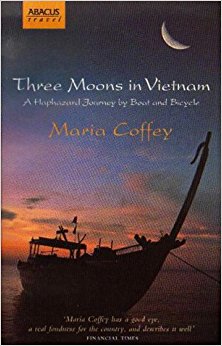 Years ago, I found myself sleeping in Michael Caine’s bed. He wasn’t in it, of course – of course! – but he had stayed in that same room and slept in that same bed while filming The Quiet American. The bed was located in Hoi An, in an old Chinese chophouse that had been converted into a guest house. Despite that it heaves with tourists (more so now, I understand, than when I was there) I found Hoi An to be a wonderfully atmospheric place. Maria Coffey describes the place thus:

“It was no problem to while away some time in Hoi An. We explored the fish market along the river bank, where women vendors smoking fat hand-rolled cigarettes squabbled nastily and noisily with each other.”

I don’t remember any squabbling, but I do remember the noise.

Mirror to Damascus by Colin Thubron 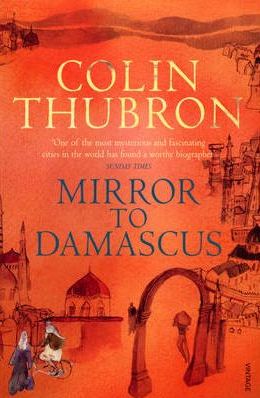 On to the Middle East now, and a book set in a city whose history stretches back seven millennia, giving me hope that when the present conflict ends, the city will rebuild and restore. I visited shortly before the war kicked off and was enchanted by the place and its people. Clad in what felt like a mediaeval cloak, I marvelled at the Umayyad Mosque; free of my robes, I haggled in the tiny shops on Straight Street and never felt unsafe in the streets of its old town, even late into the night. In his book, Thubron tackles some of the city’s history:

“Some cities oust or smother their past. Damascus lives in hers.”

Here’s to when Damascus can live freely again.

The 8.55 to Baghdad by Andrew Eames

My final choice is another reminder that time changes everything. Mention Baghdad now and the Iraqi capital is still, to many, a place that instils fear instead of hope. But less than a century ago in 1928, none other than Agatha Christie made the journey from London to Baghdad by train. Her route took her through Syria, where she frequently stayed at the Baron Hotel in Aleppo. (Rumour has it that this historic hotel, which I visited but didn’t overnight in, has so far survived the war almost unscathed.)

Eames quotes the 1928 edition of the Thomas Cook handbook which “advises customers packing for Syria that “There is nothing better for travelling than a suit of Scottish tweed, supplemented by an ulster or other warm overcoat and a good waterproof.” The author had probably never ventured further than Ramsgate.”

Times change and for some places, that’s a good thing.

Sigiriya, or Lion Rock, has been on my travel radar for over three decades.

In those days, there were no travel magazines littering my desk, nor could I surf the web to take me to exotic destinations over a cuppa.  (How did I manage?)  What I did have, however, was a passion for Duran Duran and in 1982, the band released the video for Save A Prayer.  Watch it here:

It was shot on location in various parts of Sri Lanka, among them Sigiriya, which that same year was designated a UNESCO World Heritage site.  As the camera panned, I remember watching and wondering how they got up there as the rock face looked impossibly steep. 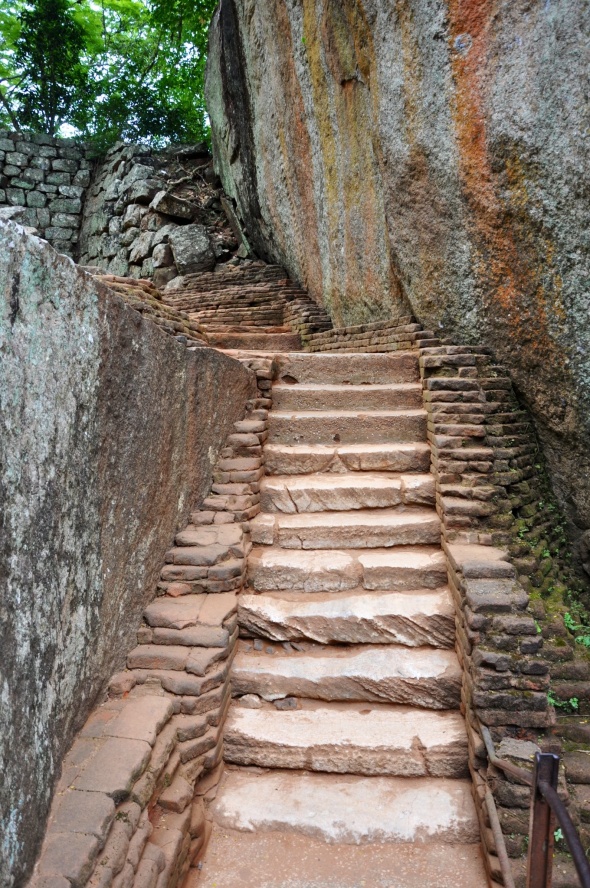 The start of a long climb

It is.  And unfortunately for me, so too were the steps leading to the top.  Slippery stone gives way to spiral metal staircases, the gateway to some impressive frescoes of bare-chested maidens.  To my horror, I then had to descend a spiral staircase before climbing again.  That’s fifty steps up and the same back just to reach the same height! 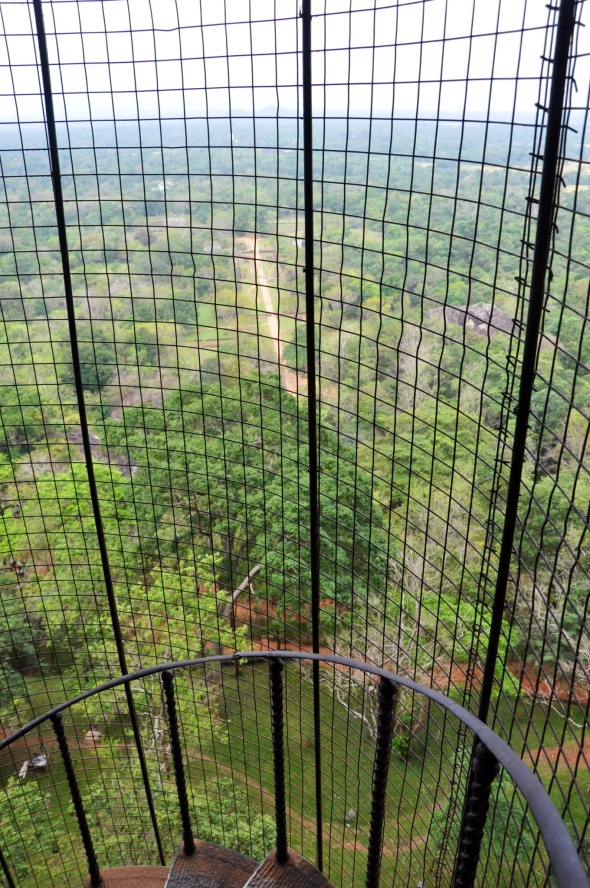 The scariest part – hard to know where to look

Spurred on by teenage dreams, and determined not to be put off by internet-induced nightmares, I made the climb this morning.  With several terraces on which to recover my breath, my knees didn’t ache anywhere near as much as I feared. 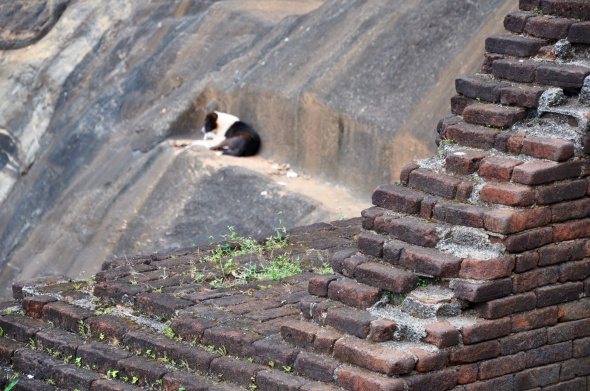 That’s just rubbing my face in it, Mr Dog

But despite an early start, I was sweating profusely as the temperatures flung themselves ever higher and the humidity permeated like a warlike invader.  By the time I got to the top I was in no state for a selfie, though I promise you the photos you’ll see here are all mine. 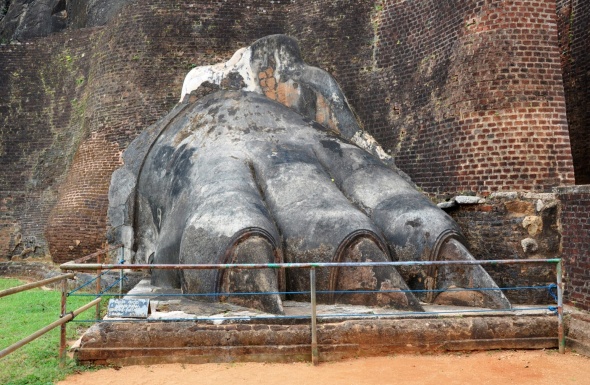 This lofty archaeological site is thought to be the ruins of the kingdom of Kassapa dating from the 5th Century.  Those topless women could well have been his concubines.  At the summit, his palace is all but gone, a few tumbledown walls and a pond full of water are the only surviving remnants of a once grand structure.

The water tank at the top

But it’s the view that takes your breath away, not the strenuous climb.  See for yourself.

View from the top

I overheard someone near the bottom saying the descent was harder, and this sign at the top didn’t help my confidence. Actually it was fine, and a whole lot less hard work than the ascent.

Fortunately no hornet issues either

Looking at the crowds building, it was definitely a good idea to climb early. The site opened at 7am, not 8.30am as stated in my Lonely Planet. 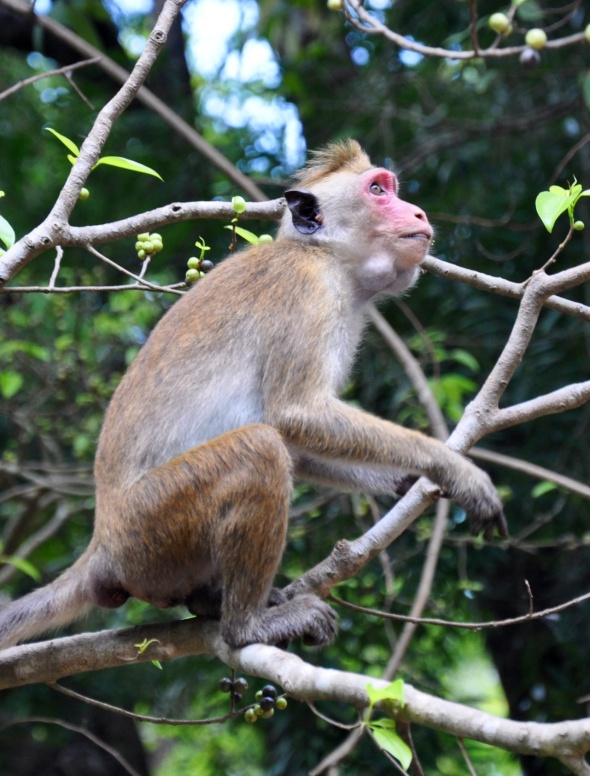 Monkeys make their home at the foot, near Cobra Rock