Have you visited London’s Postal Museum?

Piccadilly, Central, Circle – most of us are very familiar with the London Underground. But there’s another subterranean railway and it links Whitechapel in the east to Paddington in the west. Long before the DLR was operational, it ran without drivers and guards. It carried freight beneath the streets of London and kept an industry efficient despite the capital’s heavily congested streets. 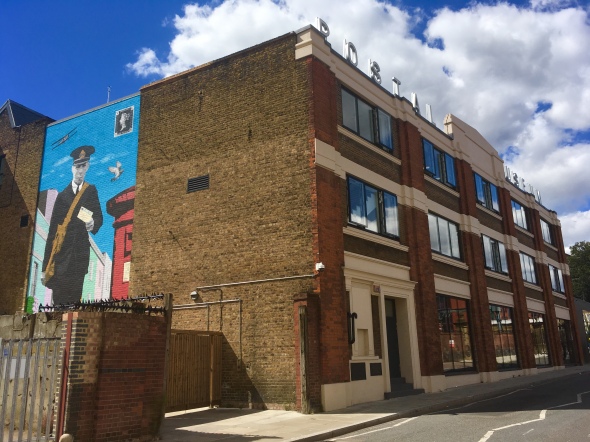 That railway is MailRail and though it was closed by the Royal Mail in 2003, the good news is that last year, specially adapted, it opened for visitors as part of the new Postal Museum. If you haven’t been, I’d urge you to go. From small children to the elderly, this is a true family attraction with something to interest everyone. Last week I was lucky enough to be offered a complimentary visit courtesy of Made and enjoyed a fun afternoon at the Postal Museum as their guest.

We began at the Postal Museum Exhibition. I expected to want to rush this part of the visit in my excitement at having the opportunity to ride MailRail. In fact, the exhibits have been very well thought out and I was soon engrossed. Many of us don’t realise that the postal service in Britain began as a private service for Henry VIII. The term “the post” referred to the horses that were used as transport. But the King’s couriers took on covert work to supplement their income and soon the notion of sending something through the post was commonplace – amongst the wealthy at least. Ironically, most of the post boys couldn’t read and letters bore the symbol of a hanged man as a stark warning not to steal the letters’ contents. The advent of the mail coach reduced the risk of robbery and increased reliability.

In the Victorian era, the Royal Mail as we know it was born. Rowland Hill submitted his proposal for postal reform in the 1830s. He suggested the introduction of uniformly low prices based on weights rather than distance, as well as the system of prepayment which we take for granted today. His ideas met with a favourable response. In 1840, the Penny Black was introduced and for weightier letters, the Twopenny Blue.

The museum features plenty of interactive exhibits. You can dress up in vintage mail uniforms and create your own stamp with your picture on it. There were also plenty of surprises. I learnt that pillar boxes were originally green. They were road tested in the Channel Islands in the 1850s before being rolled out across the UK soon after. But the colour was thought dull and dreary, so red paint was introduced a couple of decades later.

Blue airmail boxes also existed and on them were lists of last posting times for key cities around the world. The inclusion of Algiers is a reminder that places become more and less important to others as times change. Colonial names like Tanganyika, Persia, Siam and Ceylon can still be seen on this 1930s box. If you’d have wished to send a letter from London to Brisbane at this time, it would have taken 12 days to arrive. With a journey length of 12700 miles (when you take into account the many stops), it was the world’s longest air route at the time it was launched, in 1935.

Engaging though the museum was, the highlight of the afternoon was to be found across the street: MailRail. The Post Office Railway was rebranded on the occasion of its 60th birthday in 1987 to this catchier brand name, but in actual fact, the idea of a railway for the postal service had been mooted as early as 1909. The route linked the six big sorting offices with two mainline train stations over 6.5 miles of track. 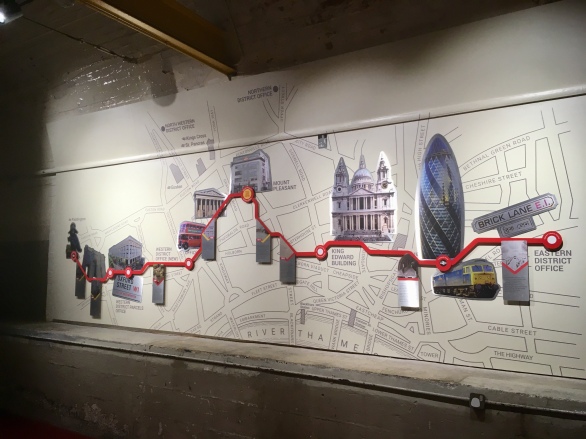 Sacks of mail were transported on these trains and an army of employees manned the platforms unloading the precious cargo. The trains ran for 22 hours a day, six days a week. An estimated 4 million letters passed through the system every day. A series of lifts, chutes, conveyors and elevators were used to avoid “laborious man-handling of bags” which would slow the whole process down. Automatic train control was in operation, leading some employees to comment that it was like having their “own giant train set to run”. With as many as eighteen mail cars speeding around the system at any one time, they needed to keep their wits about them.

The mail was sent by overground train to the different parts of the UK and postal workers sorted it by destination while on the move in what was called a Travelling Post Office. This part of the museum has a mock up of such an onboard sorting office which you can use to file “mail” – as the carriage rocks it’s not easy to keep your balance if you’re not used to the motion.

The ride itself lasted about fifteen minutes, completing a loop under the Mount Pleasant section of the railway beginning and ending at what was once the maintenance depot. When operational, express trains would have taken the same amount of time to run between Liverpool Street and Paddington – try doing that on the Tube now! It was well done – from the cramped compartments we listened to an informative commentary and enjoyed some interesting audio-visual projections along the route.

Though you might struggle if you’re claustrophobic, spare a thought for my father. A retired engineer, he once carried out a survey of some of London’s sorting offices and was sent with his bags via MailRail. That would have been a very tight squeeze. At least now you get to leave your stuff in the lockers provided!

The Postal Museum and MailRail are open all year except for 24-26th December. Opening hours are 10am to 5pm with the last train departing at 4.35pm. Allow at least a couple of hours for your visit. As you need a timed ticket to ride the railway, it’s best to buy your tickets in advance. Details of ticket prices and other information can be found on the Postal Museum’s website here:

This entry was posted on August 13, 2018 by juliamhammond. It was filed under Day trips, Destination information, Europe, Independent travel and was tagged with MailRail, Postal Museum London.