Armenia claims to be the oldest Christian nation on the planet so it’s hardly surprising that you’ll encounter plenty of monasteries. Most feature a “gavit” or entrance hall, where the floor is often spread with graves. A few steps will lead into the church proper. As a woman, covering your head isn’t required as it would be in Georgia. You will see the faithful reverse out of the church so as not to turn their back on God; even those who aren’t regular churchgoers sometimes do this out of respect. Here’s a brief guide to eight of its most commonly visited. 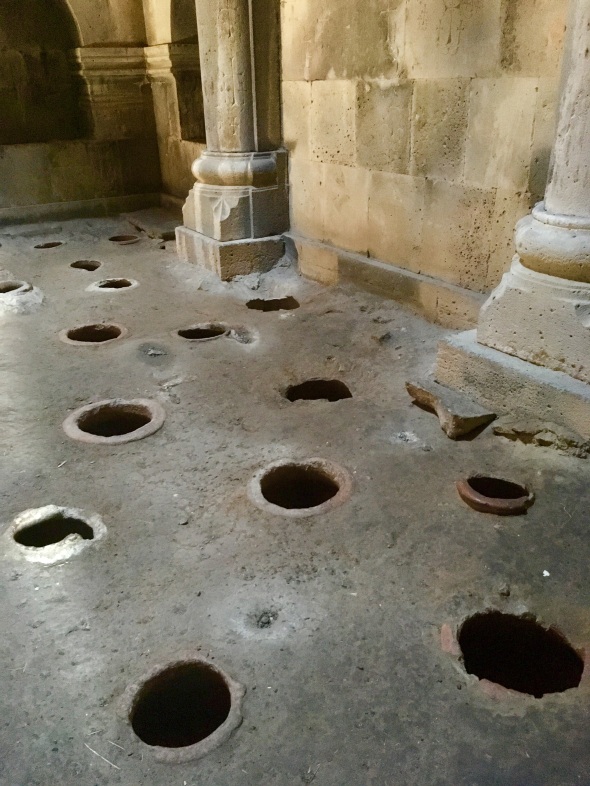 Located in the Debed Canyon, this is for many visitors their first monastery in Armenia as it lies on the way to Yerevan from the Georgian capital Tbilisi. This imposing mediaeval complex was built in the 9th century, a sprawling delight of building added on to building, the grey stone set off perfectly by the terracotta of the roof tiles. Inside, one of the rooms has a series of holes in the floor, once used for storing wine.

Why should you visit?
As it’s quite a distance from Tbilisi to Yerevan, this is a great way of breaking the journey.

Twinned with Haghpat, this one means “older than that one” though it’s not as attractive from the outside. The cavernous interior is fascinating, with plenty of tombstones on the floor. Step on them as it’s commonly held that if you do, you’re freeing the dead of their sins – and fortunately not taking them upon yourself as a burden in the meantime. And you’ll learn how to recognise whether a monastery is a functioning church or not – if it has a curtain that can be pulled across the altar, it still hosts regular services.

Why should you visit?
While you’re in the Debed Canyon, you may as well visit both the monasteries.

A party of schoolchildren were visiting at the same time, so for me, this monastery lacked the serenity that some of the others offered. It was a good opportunity to watch the priest deliver a blessing and to hear the acoustics as the children sang inside the chapel. Look out for the hole in the floor which allows you to peep down into the church from above. There’s also a spring inside which is believed to be holy.

Why should you visit?
If you’re in Yerevan and your time is limited, this is an easy excursion from the city and together with nearby Garni temple, doable in just a few hours. 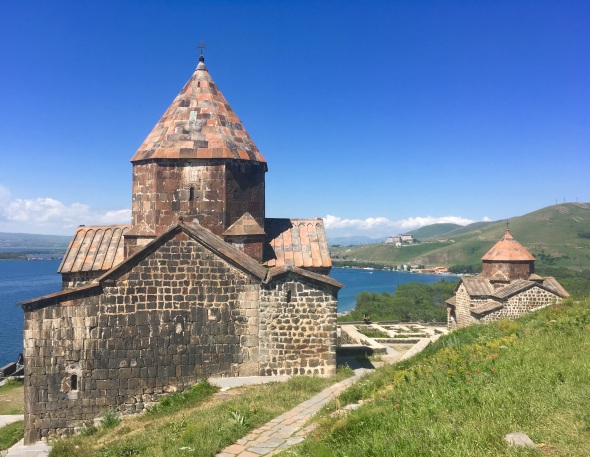 To reach Sevanavank, located above the shoreline of Lake Sevan, you’ll need to climb a lot of steps: 243 to be precise. The reward, though, is a panoramic view of Armenia’s largest lake and its environs. Again it’s a double church site plus plenty of khatchkhars to admire in its cemetery. Those are the standing stones which you’ll see at all religious sites. The largest concentration can be found further along the lakeshore at Noratus cemetery. But it’s that vast expanse of blue that will draw your attention away time and time again.

Why should you visit?
It’s all about that spectacular view – and the satisfaction of making it up the steps without collapsing.

This monastery, built out of tufa, also lies on Lake Sevan, but this time occupies a less lofty position. Its alternative name is Aghavnavank, meaning “church of the human pigeons”. The connection refers to a legend associated with Tamerlane, whereby the local population were turned into pigeons to keep them safe from the invaders – a deal had been struck that anyone who could fit into the church would be spared and of course birds are smaller than people.

Why should you visit?
If they’ve gone to the trouble of coming up with such a fantastic legend, you’ve really got to see how big the church is from the inside.

This one’s all about the setting, and what a setting. The road curves on approach offering the picture postcard image of the monastery perched to the right of a backdrop of Mount Ararat, the mountain where Noah’s ark came to rest. From the rear of the monastery, you can climb a small hill – look for the cross on top of it – and you’ll have a similar view, but this time the monastery will be on the left. Inside, you’ll see a steady stream of people descending a narrow stairwell at the doorway to the church – it’s a well, and it’s a dark and shaky climb down.

Why should you visit?
The setting is special, but pick a clear day so you get the panorama of Ararat at the same time; you’ll have a better chance of good visibility in the morning.

Tucked away up a narrow canyon, Noravank is another site that feels special as a result of its location. There are some wonderful carvings, including one of Jesus with Peter and Paul. What you’ll remember, though, is the scarily steep and narrow stone block steps that lead up to the second storey of the church. Take it from me, it’s much worse coming down. But from the restored cupola to the view across to the other chapel from up high, it’s worth dealing with the fear. After all, you can always come down on your bum!

Why should you visit?
The vertiginous steps up to the second level of the church might be scary, by the view from the top is splendid.

This one is reached by the world’s longest ropeway (that’s cable car to those of us who speak the Queen’s English). If you don’t believe them, there’s a sign which claims Guinness has officially recognised it as such for their Book of Records.  The column allegedly predicts earthquakes and approaching enemy armies.

Why should you visit?
With such an awesome approach, this one’s a must-see.

Of course, that’s not all. But even spreading these across a week, I was beginning to feel monasteried-out by the end of it. My advice would be not to feel like you ought to see every major monastery in the country, just pick a few and enjoy the view. If I had to pick a favourite, I’d probably say Sevanavank, as its lofty position represented not only an impressive feat of engineering but also felt remote despite the visiting tourists. Norovank, with those crazy steps and beautiful carvings, came a close second, though perhaps it was a little too perfectly restored to claim the top spot.

This entry was posted on June 29, 2017 by juliamhammond. It was filed under Destination information, Europe, Independent travel, Uncategorized and was tagged with Armenia, monastery, wnich monastery should I visit in Armenia.