More from Extremadura: the Roman ruins of Mérida

Spain probably isn’t the first country that springs to mind if you’re planning to explore the legacy of the Romans, but their empire encircled the Mediterranean (and beyond).  In Spain, in addition to better known sights like Segovia’s aqueduct and Cordoba’s old bridge, Mérida is one of the best places to see some of the structures left from that age.

The modern city of Mérida has developed around and on top of the Roman colony of Augusta Emerita.  It was built around 25BC and was the capital of Lusitana, located the furthest west of the Roman provinces.   I began my exploration at the amphitheatre.

Passageway leading to the main arena

Though not as well preserved as others I’d visited – Tunisia’s El Djem, Nîmes in France and of course Rome’s Colosseum spring to mind – it had a certain charm.  Being a weekday in the height of summer, visitors were thin on the ground, giving me a place free of tour groups to savour at a leisurely pace. 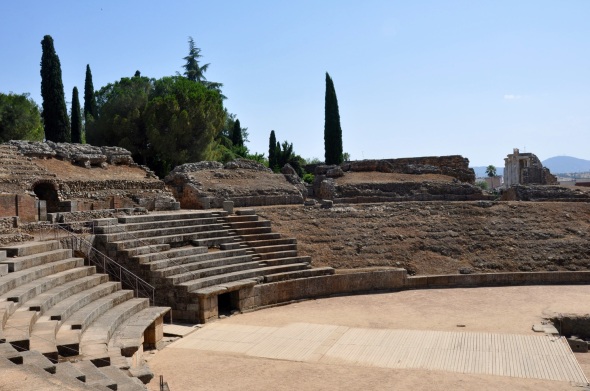 The amphitheatre viewed from the top of the stands

The amphitheatre itself was built about 8BC, designed to stage gladiatorial fights and other such spectacles.  It would have had a capacity of around 15000 people, making it considerably smaller than the Colosseum which could seat almost four times that number.  Adjacent to the amphitheatre is the theatre.  More impressive, in my opinion, it’s a few years older than its neighbour, though back then, it wouldn’t have been nearly as popular.  Give the Romans a choice between a bloodthirsty fight and a stage play and the fight would win every time. 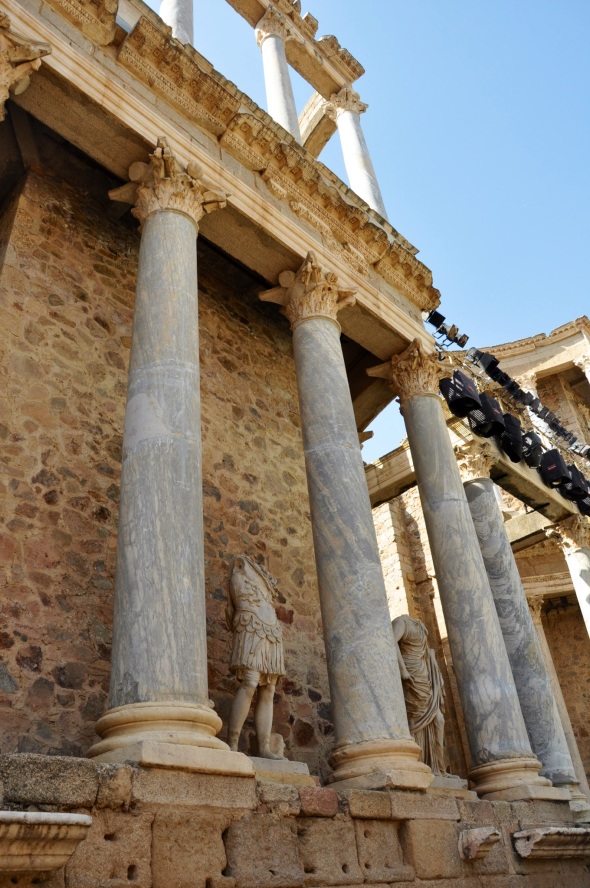 The headless statues behind the stage

Six thousand people would have been able to watch the proceedings.  These days, the theatre is still in use; the Festival de Mérida takes full advantage of the atmospheric setting for a summer of plays.  My schedule didn’t coincide, so I had to content myself with sitting on the front row in front of an empty stage gazing up at statues of deified emperors.

Perhaps the most impressive structure in the city is that of the Temple of Diana.

The Temple of Diana

Its Corinthian columns make it an impressive sight.  Behind, lies the Palace of the Duke of Corbis, into which the temple was absorbed in the 16th Century.  The temple lies on one of Mérida’s main streets and there’s a cafe next to it, which makes it a surreal sight.  Nearby, is the Forum, again surrounded by the town’s modern buildings. 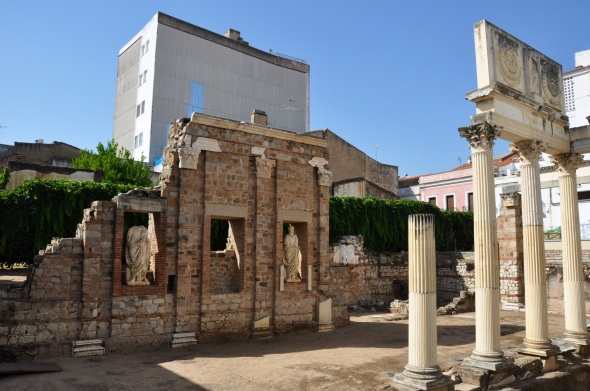 Strolling downhill, it’s not long before you reach the Guadiana river and there, you find the old bridge.  Built in two sections, it links the river’s banks via an island.  Sixty of its original sixty two spans still exist, and wisely the bridge was pedestrianised over two decades ago.

The Roman bridge at Mérida

Following the river bank from the bridge, after exploring the 9th Century Moorish Alcazaba that abuts its western bank, I headed to the Casa del Mitreo.  There, Mérida’s most beautiful mosaics can be found.  Best known is the mosaico cosmológico, laid in the 3rd Century and partially intact today.

Parts of the mosaic can be seen to this day

The city also has a Hippodrome, but I made a conscious decision not to go.  I could blame the weather – who wants to do such a walk when the temperature is still 40°C at six in the evening – but actually it was to avoid comparisons with the excellent experience I had at Jerash in Jordan.  Its Hippodrome is used for the wonderfully entertaining RACE project.

You can read about it here:

This entry was posted on July 25, 2016 by juliamhammond. It was filed under Day trips, Destination information, Europe, Independent travel and was tagged with Mérida, Roman ruins, Spain.