One of the unquestionable highlights of touring Sri Lanka is a journey by rail. The network is extensive and links many of the country’s must-see destinations. There are many tour companies who offer itineraries based around train travel, but these can be expensive and prescriptive. If you prefer to go it alone, here’s my guide to getting around by train.

Although trains link many of the country’s cities and towns, there are gaps. I planned a circular route beginning at Colombo Fort station, heading inland to Kandy, then up into the highlands to Nanu Oya (for Nuwara Eliya) and then on to Ella. Separately, I rode the stretch of track from Weligama to Galle from where you can catch a train back up to Colombo.

Some of the faces I saw while waiting to board

Arranging a driver for the gaps

To visit the lofty palace at Sigiriya, I hired a car and driver for the day, stopping off on the way back at an elephant sanctuary. There’s no rail link between Ella and the south coast either, so again, I hired a car and driver. This time I stopped off half way to take an elephant safari at Uda Walawe. Although I could have picked up a train at Matara, I chose to book the driver to Galle so I wouldn’t have to clock watch all day. Drivers were arranged as I went along, either through the hotel or via a taxi driver at a station. Costs aren’t excessive by UK standards. To travel from Galle to the airport via the fast expressway costs around 11000 rupees including tolls (about £55). 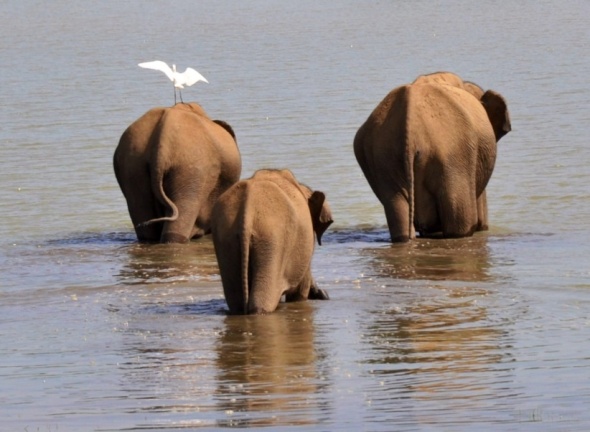 To book or not to book?

Some trains can be reserved online and you may wish to book these trains for the beginning and end of your trip if you want to be sure of making connections. Depending on how long you allow at each stop, you should be fine to just purchase your other tickets as you go along, unless you’re travelling in a large group or at a holiday time.

Tickets are easily purchased on the way; my advice is to call in at the station a few days ahead of travel

Where did I get my tickets?

I caught the Rajhadani Express from Colombo Fort to Kandy; a reserved seat in air-conditioned first class cost 1100 rupees (less than £6). It was straightforward to book online. Seats become available two weeks prior to departure and you just need to make a note of your reservation number. On arrival at Colombo airport, as you exit into the tour and taxi desk hall, you’ll see a Mobitel counter right by the door. They will print your ticket for you on production of your reservation number and passport. Alternatively, you can do this when you get to the station. 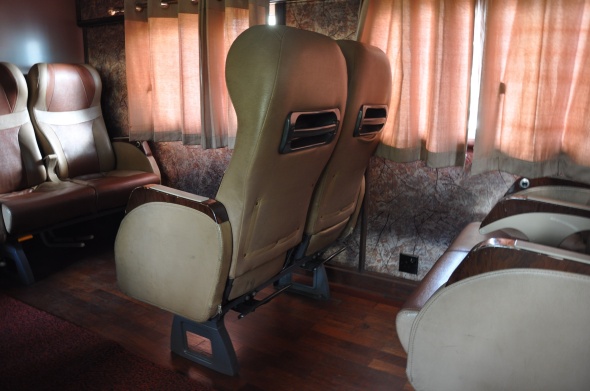 It wasn’t what you’d call luxury by European standards but the fat leather seats and padded arm rests were comfortable. The train lurches around a lot so whichever carriage you opt for it’s not going to be a relaxing ride, however. Expo Rail bookings work in a similar way to the Rajhadani Express with their own dedicated website. However, departures with these two companies are limited and may not fit in with your plans. You can check the online schedule on the Sri Lanka Railways website for a full list of trains operating on the days you wish to travel.

Whether or not you can book other trains in advance depends on whether the train has any reserved seat carriages or not. Following up on a recommendation from the Man in Seat 61’s excellent website, I booked the Kandy to Nanu Oya leg with Visit Sri Lanka Tours, a UK based travel agent. They were efficient and most importantly, the reservation number they sent me was recognised at Kandy station when I went to collect the ticket. Obviously they charge a premium for this service, but their rates were not exorbitant. 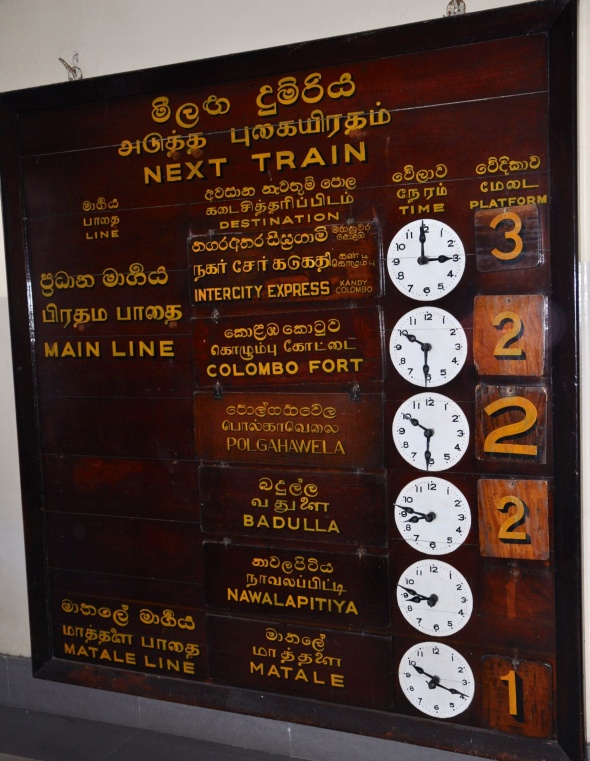 If a web connection eludes you, use the station timetables

Reserved carriages can be first, second or third class. First class isn’t necessarily air-conditioned but can be. Don’t expect luxury; it’s more about space than quality. Second class usually has four seats per row, overhead fans and windows that fully open, while third class is more crowded with six seats per row. 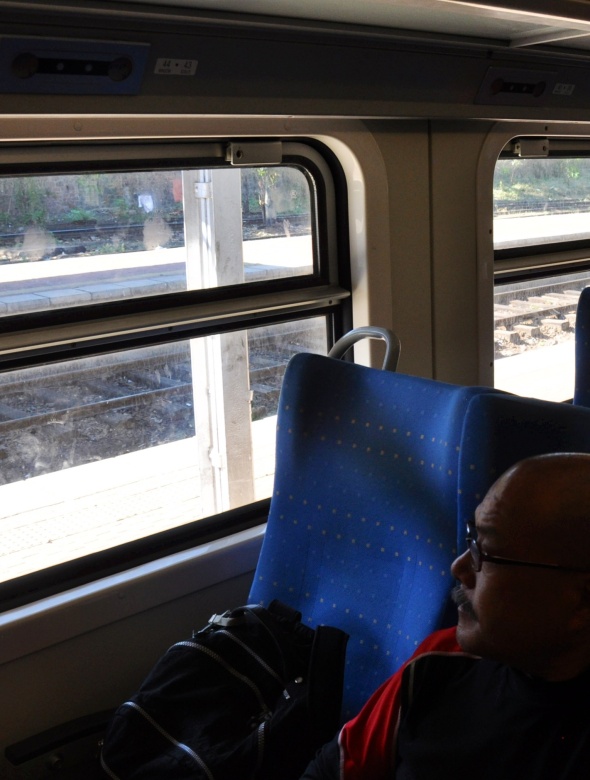 When I booked the train from Kandy to Nanu Oya second class was full so I bought a first class ticket for 1000 rupees (about £5). I was told that sometimes additional reserved seating is released at the last minute at a premium price. If at first you’re told the train is full, it might therefore be worth asking again the day before. This strategy worked for a London couple I met on the train whose driver procured second class reserved tickets at the last minute. 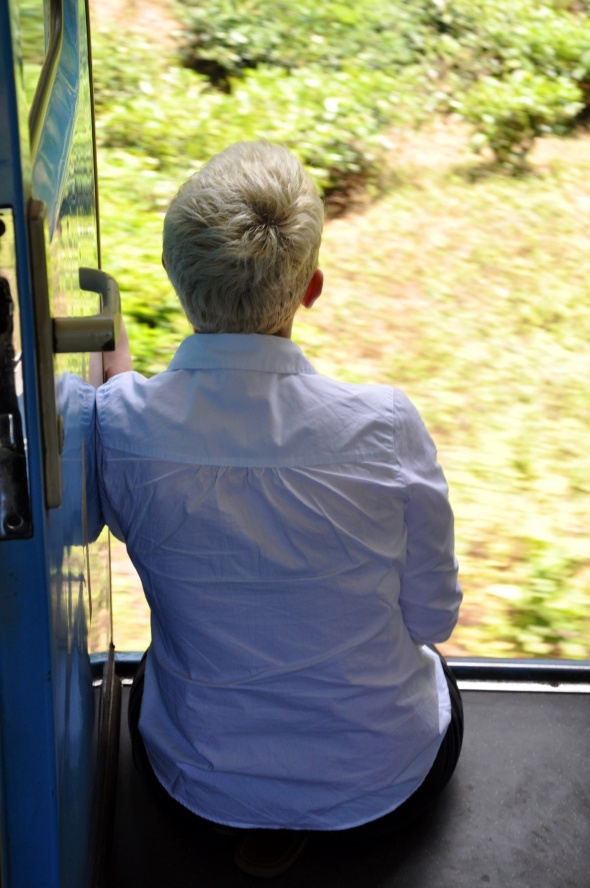 Or ride at the door…

For at least half the journey I rode by the door as it was more social and I could take better photographs from the open doorway. I tried not to think about health and safety too much, but definitely held on tight. One jolt and I could have been offering myself as extra labour in a trackside tea plantation.

Great views from the open doors for photographers

From Nanu Oya to Ella a first-class observation car had been attached to the back of a train mostly hauling freight but with a couple of unreserved passenger cars also. I wouldn’t say the view out of the dirty observation window was much to write home about, for photographers at least, but the windows did open fully making for some fantastic scenic shots from my seat and a welcome breeze too. 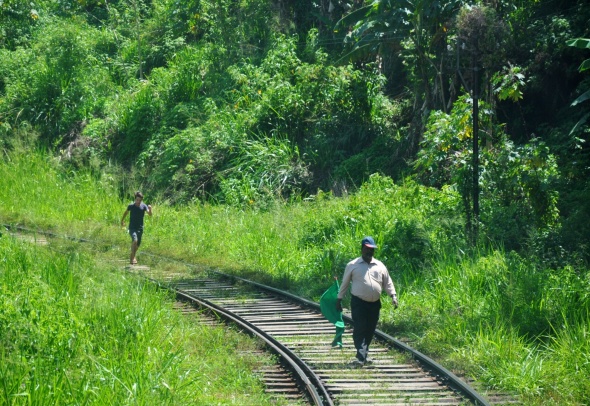 On the Weligama to Galle hop, I just bought a ticket on the day as there was no allocated seating on that local train. It cost 60 rupees (about 30p) and I just found a seat when the train pulled in.

As it was a middle of the day departure, it wasn’t crowded, but on some peak time services the advice from the station master was that to get a seat, you may have to fight. I didn’t like the sound of that for the Galle to Colombo leg of my trip which I would have had to make at rush hour with luggage, so I opted to hire a car and driver instead. Had my schedule permitted, I could however have pre-booked an afternoon train with a reserved seat, just not a morning one. 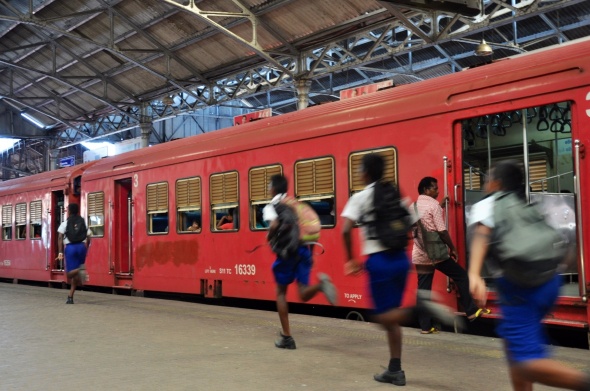 Boys running for their train at Colombo Fort station

And one last piece of advice…

All tickets are collected on exit so make sure you keep your print out (reserved seating) or little cardboard ticket (regular seating) safe throughout the journey. My ticket was checked en route by an inspector on the Rajhadani Express but not on subsequent trains.

This entry was posted on March 18, 2016 by juliamhammond. It was filed under Asia, Destination information, Independent travel, Travel advice and information and was tagged with rail travel, Sri Lanka, sri lanka by train, sri lanka rail holiday, sri lanka railway.