Uda Walawe National Park is home to the largest concentration of elephants in Sri Lanka.  It was created in 1972 and centres on the Uda Walawe reservoir.  Although in March there was quite dense vegetation on the way in to the park, it thinned by the lake shore and thus made it easier to see wildlife.  At first, sightings were limited to a few monitor lizards and birds, neither of which excited me much.  But at the lake, a couple of herons were pottering about in the shadows seemingly oblivious to the crocodile skulking behind them.  In the middle distance, some water buffalo wallowed. 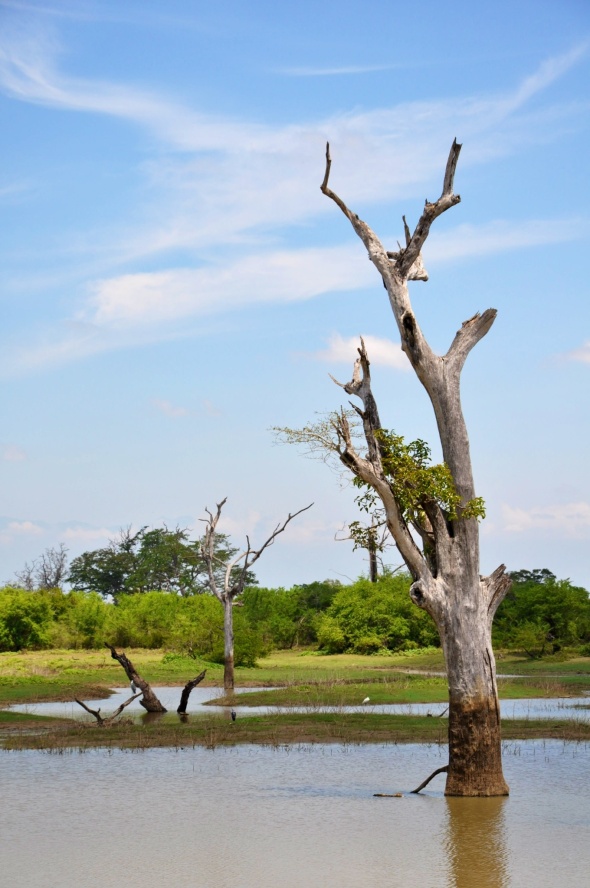 But I’d come to see the elephants, said to number around six hundred, making it the best place to view them in the country.  Easily seen year-round, herds can number over fifty but the largest family group I saw was eleven, still impressive.  Our first sighting, a mother with two juveniles, was entertaining.  They took a stroll down to the lake where the youngest couldn’t wait to relieve himself in the water.  Toilet taken care of, it could bathe happily before the trio wandered back into the bush.

As we drove along the lake shore dirt track, a lone adolescent  passed us at close range, near enough to leave us in no doubt that he was a male.  Unperturbed by the camera clicking, he ambled past towards the lake.

In the vegetation, the thick leaves can provide excellent camouflage, but the guide was equally skilled in locating the wildlife.  This was our closest encounter, though fortunately the creature was very docile and didn’t warn us off.

A herd of eleven including two babies was the highlight of the drive.  One infant looked to be just three months old or thereabouts, with the other perhaps six months.  It’s always delightful to see how the older members of the family protect the youngest when they’re on the move, keeping the babies close by but placing themselves between infant and safari vehicle just in case. 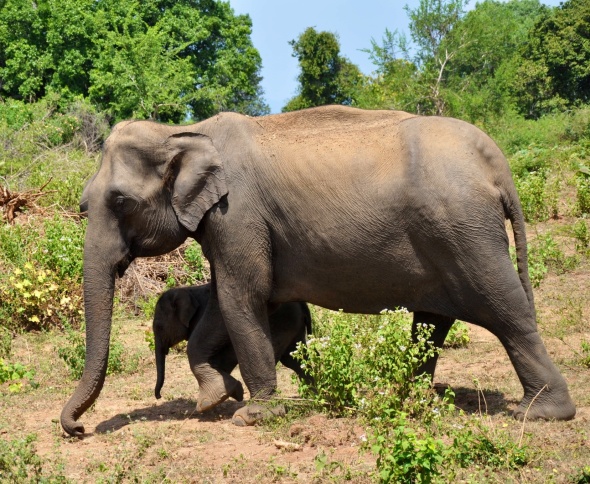 There are other species to keep the elephants company, and I saw plenty of water buffalo and in the distance, a couple of spotted deer.  A family of monkeys swung in the branches of a tree and amongst the birds I recognised were a grey heron and a kingfisher by a lake so full of green algae it was hard to decide which was the most vibrant in colour.  Leopards are said to be present in small numbers though I wasn’t lucky enough to encounter one.

While some people stay at one of the nearby hotels or guesthouses, I took a game drive en route from Ella to Galle.  The three hour stop was a welcome diversion from sitting in the car.  My driver arranged a safari jeep within minutes and it cost about £45 for a private excursion with Wild Safari Service including all entrance fees.  Be prepared to haggle.

This entry was posted on March 14, 2016 by juliamhammond. It was filed under Asia, Day trips, Destination information, Independent travel, Travel advice and information and was tagged with Elephants, Safari, Sri Lanka, Uda Walawe.