Posts tagged “things to do in Nassau”

Ask anyone who’s visited the Bahamas what is the food that epitomises the islands and chances are, they’re going to say conch. Pronounced ‘conk’ this ubiquitous marine mollusc is served in all manner of ways, the most popular being deep fried fritters with just the right amount of spice to give them a kick. There’s also delicious cracked conch, which can best be described as the Bahamian version of fish and chips. Every restaurant has it on the menu, so finding it is easy. Knowing which serves the best is a whole lot harder, however.

I believe there’s no better way to get to know the heart and soul of a country than through its stomach. Though the enduring image of the Bahamas is of glistening turquoise waters surrounding necklaces of cays, there’s a lot to be said for getting out of the water and into Nassau’s historic downtown district. But the capital’s streets are packed with eateries and it’s hard to know where to start. I figure it’s always best to enlist the help of a local when it comes to food. I’d been tipped off by Cecilia fom Hong Kong Foodie Tasting Tours that in Nassau, I should get in touch with Tru Bahamian Food Tours. 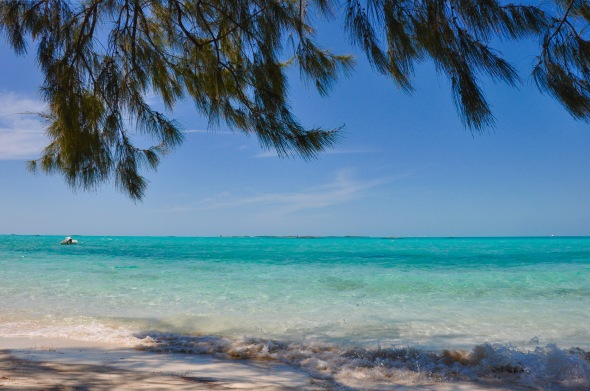 Alanna Rogers set up the company in 2012, describing herself as a passionate foodie whose own travels inspired her to showcase the cuisine of her own country. The Bites of Nassau food tour is popular with cruise ship passengers looking for a memorable experience when their ship’s in dock, as well as with those who are staying on the island. It even attracts locals, which in my opinion is another measure of how good it is. Something like 5000 people take the tour each year, and the company is going from strength to strength.

My husband and I took the tour this March as part of a week-long holiday in the Bahamas. From our base at Cable Beach it was an easy ride into Nassau. Guide and operations manager Murray was easy to find on the steps of the cathedral, built in 1841 as the first official place of worship in the country. Our small group strolled around the corner to Market Street for a look at the pastel pink Balcony House. The oldest wooden structure in the city, it hosted Ian Fleming when he came to the Bahamas when Thunderball was filmed in 1965.

Across the street was Bahamian Cookin’. Murray warned us that this would be the largest of our tasting plates, and it was here we had our introduction to the Bahamian staples: conch fritters, fall off the bone chicken, baked mac and cheese and of course peas and rice. I hate peas. But peas here are beans, fortunately, and this was so tasty I confess to stealing some of my husband’s while his attention was distracted. On the way out, we had a refreshing glass of switcha, a kind of Bahamian limeade. Apparently, spellings of switcha vary considerably so if you’re reading this and spelling it differently, I’d love to know how you write it. 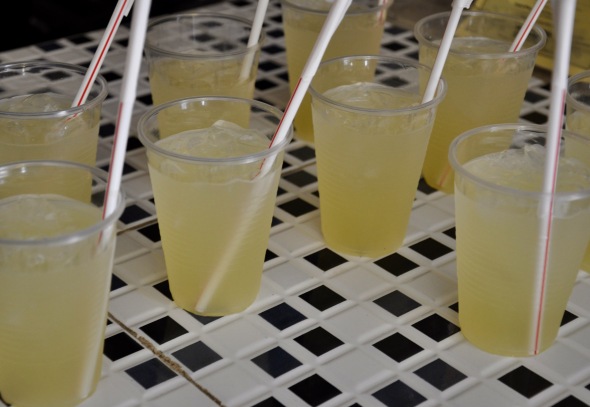 Next up we got to meet one of Nassau’s most colourful characters. In the Towne Hotel, we were served a potent Planter’s Punch while enjoying the company of Max, who’s the hotel’s resident blue macaw. The artwork in the hotel was fabulously diverse and a big talking point as we sipped our rum cocktails.  The chatter continued as we reached Graycliff.

Now a hotel, it was built in 1700 by privateer John Howard Graysmith.  An inn from 1844, it was also once the private home of wealthy Canadian Izaak Killam and later Lord Dudley. The latter played host to the likes of Edward and Mrs Simpson, Churchill and Lord Mountbatten. It’s also seen Al Capone, the Beatles, Jay-Z and Beyoncé.

We learned that some of the bottles of wine in its cellar would cost the average tourist a year’s wages. Passing on that, instead we got to try some of the chocolates in the on-site factory. The first, labelled “white chocolate twice as hot as goat pepper” was a truly Marmite experience – some of us (me included!) spat it out half-eaten while others would have been delighted to eat the whole tray. That’s half the fun of taking a food tour, of course, to experiment with flavours you wouldn’t otherwise have tried.

Nearby is Government House. Our Queen is Head of State in the Bahamas but of course her representative the Governor General takes care of things for her and these are his digs. The building actually stands on the highest point of downtown Nassau affording a fabulous view of the cruise ships in dock. We walked down a flight of steps – not those steps – to visit Biggity in Bay Street. Amanda’s creative take on pigeon pea hummus, rosemary and thyme infused olive oil, and garlic Johnny cake crostini was a big hit with everyone, as was the bush tea we washed it down with. 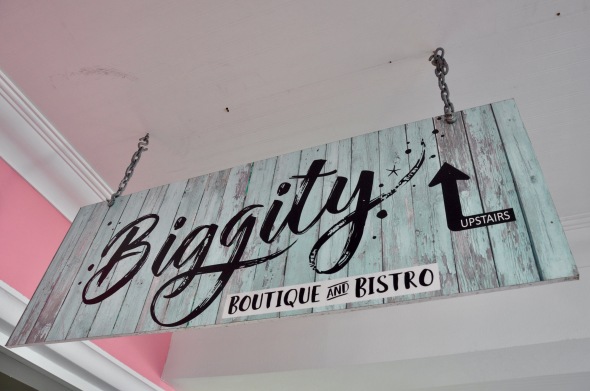 Murray explained that Bahamians consider bush medicine important. A nod to the country’s African heritage, native spices, leaves, flowers and tree bark are artfully combined to cure all manner of ills. Apparently it’s also quite common to consume a medicinal tot of rum to avoid having to visit the doctor. I’ve bookmarked this interesting blog from the Tru Bahamian Food Tours website just in case I feel under the weather:
https://www.trubahamianfoodtours.com/tru-bahamian-must-eats/bush-teas/.

Our penultimate stop was at Athena Cafe. Many of the Greek community in Nassau can trace ancestors who came to participate in the trade of sea sponges back in the 19th century. They stayed on, blending typical Greek dishes with local ingredients – we had a tasty chowder. Rounding off the tour was a sweet treat from the Tortuga Rum Cake Company. The group enjoyed rum cake with walnuts but as I’m not a fan, my rum cake came nut-free with pineapple instead. It was delicious. 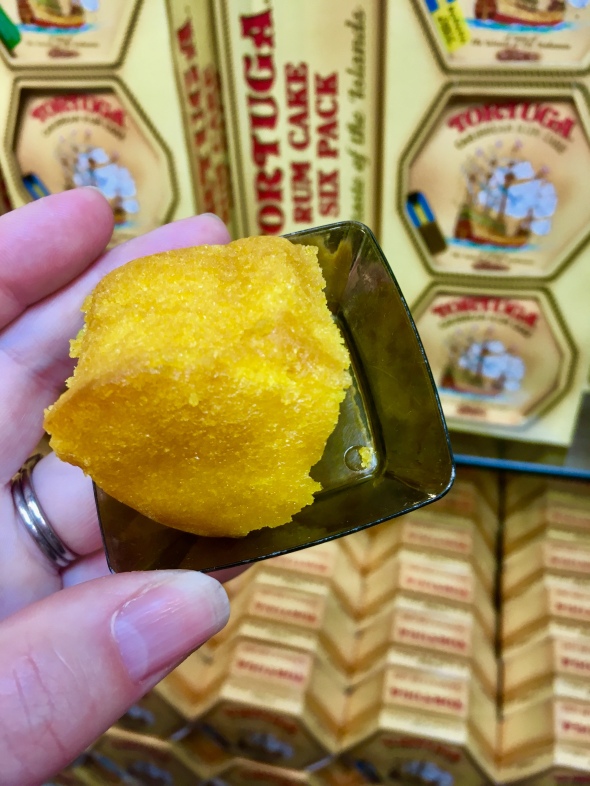 Tru Bahamian Food Tours promote Bahamian cuisine as “the islands’ most unexplored cultural treasure”. After a few hours in Murray’s company, I think they’ve got that just about right. What sets this tour apart from other food tours is the emphasis it places on history, culture and the pivotal role of immigrants to the Bahamas. When asked what they enjoyed best about the tour, most people commended the contextual information that Murray had provided.

However, compared to other food tours I’ve taken there were fewer opportunities to chat to fellow participants about the food, which has in the past been an enjoyable way of processing what I’ve learnt. Also, towards the end, the tour felt a little rushed; several of the other tours I’ve done have been around five hours long. By lengthening the tour from its current three hours, both these points could be addressed. I guess when something’s good, you don’t want it to end. 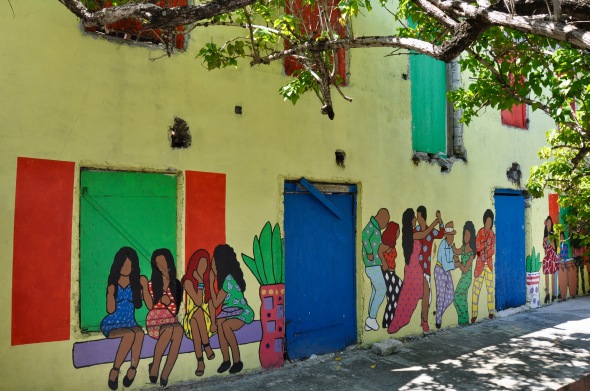 But those are minor criticisms of what’s an excellent tour. If you’re planning to visit Nassau any time soon, and if you want to understand what makes the country tick, this is a must for your itinerary. But take my advice: arrange the tour at the start of your trip. Once you’ve tasted what’s on offer, you’re going to want to go back for more.

You can find out more about Tru Bahamian Food Tours on their website and social media feeds – the links are at the foot of this post. The excellent Bites of Nassau tour is a great way to experience the islands’ capital Nassau. It runs several times a day from Monday to Saturday and lasts about 3 hours; you can book online. The company has also just launched a Sunday cocktail tour, which should prove to be just as popular as the original Bites tour. If you’re feeling really inspired, they can also arrange cooking classes giving you the skills to recreate the dishes you’ve enjoyed once you get home.

The Bites of Nassau costs $69 per person. My husband and I enjoyed the tour free of charge in exchange for promoting the tour via this blog.  The photos which illustrate my blog are a mixture of mine and those supplied by Tru Bahamian Food Tours, but the opinions are entirely my own.