How to see the Bahamas’ famous swimming pigs

The Bahamas consists of around 700 islands, cays and islets strung out like jewels on a necklace in some of the shallowest, most turquoise waters of the Atlantic Ocean.  Most of these islands are uninhabited.  Those further from Nassau, the country’s capital, are known as the Family Islands or Out Islands.  The Exumas draw visitors for snorkelling and watersports as well as film makers – James Bond’s Thunderball was filmed near Staniel Cay and Pirates of the Caribbean on Sandy Cay.  Johnny Depp liked the place so much he even bought his own private island nearby.  He’s not alone.  The Bahamas has a higher number of privately owned islands than anywhere else on the planet. 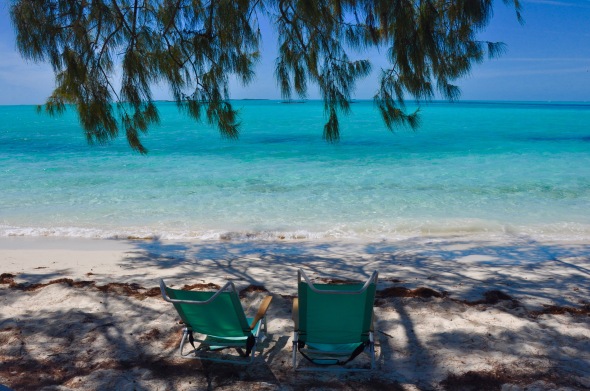 But when it comes to celebrity residents, even Hollywood stars are eclipsed by the Exumas’ famous porcine residents.  No one knows for sure how pigs got to Big Major Cay, but these days they are the Exumas’ biggest draw.  Around twenty or so pigs live on the beach, charming the pants off the steady stream of tourists who come here to swim with them.  The proximity of Big Major Cay to Nassau makes it possible to visit for the day, even if you’re stopping off as part of a cruise. 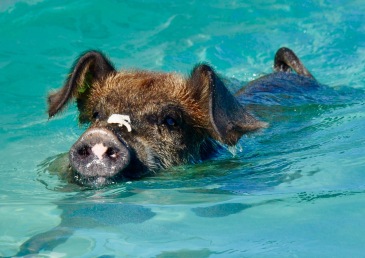 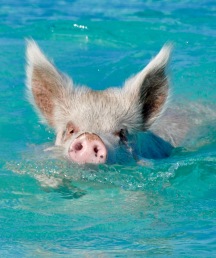 It’s a popular trip but doesn’t come cheap.  Many operators offer excursions.  A flyer from Exuma Escapes in our hotel room offered a day out by boat for a special price of $359 per person, which included a 150 nautical mile round trip by speedboat, plus stops to see not only the pigs but also iguanas and to snorkel with nurse sharks.  We ruled this out as it was billed as a bumpy ride and not suitable for those with bad backs.  To take a smiliar package by air would have cost $550 per person which pushed it well out of our price range.  Though you’d have an hour with the pigs and another with the sharks, the return flight would be at 3pm and so with check-in advised over an hour before, that would cut into the day considerably. 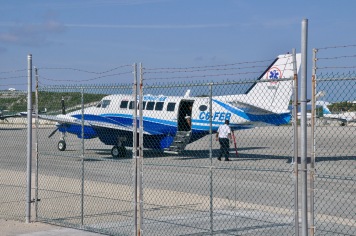 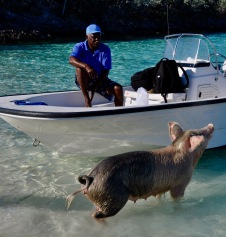 Fortunately, I read about a company that would unpackage the trip.  We contacted Staniel Cay Vacations whose website http://www.stanielcayvacations.com/tours/ lists a number of options including a pigs only boat trip for $50 per person (minimum 2 people).  Booking flights separately with Flamingo Air at http://flamingoairbah.com/ cost us $240 per person.  We flew out of Nassau on the 0800 flight, arriving before 0900 and departed at 1700, with check-in required by 1530.  We needed to fund our own transport to the airport and lunch at Staniel Cay, but still didn’t pay what we’d have needed to shell out for a tour. 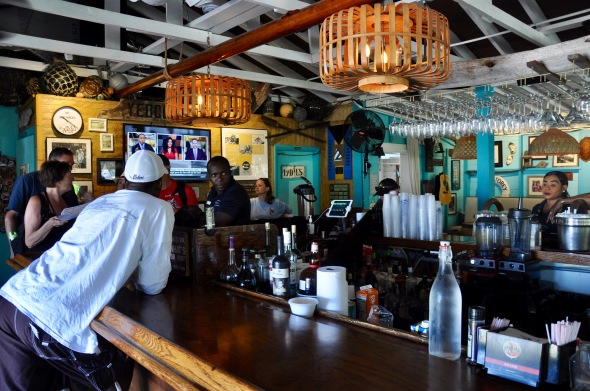 Our boatman, Mr George, was waiting for us at the airport and pointed out Thunderball Cave as we passed.  We didn’t see the iguanas like the tour groups do, of course, but while we were enjoying an al fresco lunch at the Staniel Cay Yacht Club a frenzy of nurse sharks clustered around the boat dock.  We ended up with plenty of relaxation time at Staniel Cay – spent lazing under a shady tree on the beach and watching the boats come and go from the marina. 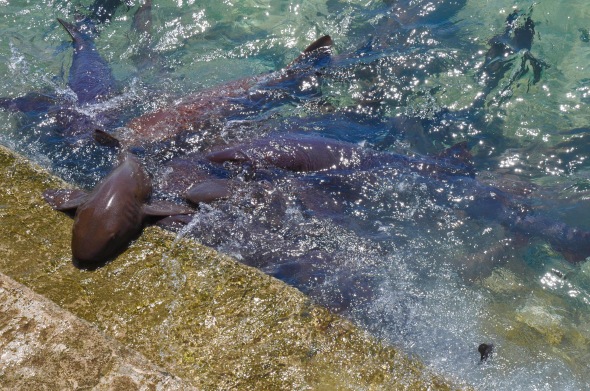 Best of all, we were ahead of the tour groups at Big Major Cay and had the pigs to ourselves for a while before another couple of boats arrived.  This in itself made the day.  Mr George had brought food along so we were able to feed the pigs while in the water.

Of course, we took a small risk unpackaging the tour but were fortunate that the flights were pretty much on schedule.  Monique was responsive and helpful, answering emails promptly and making sure we were all set.  Feeding the pigs was fun and watching them swim was a memorable experience.  Mr George kept a close eye on us and made sure we gave pregnant mama pig, who had a tendency to bite people’s bums, a wide berth.  And the piglets were cute too, the youngest just a couple of weeks old. 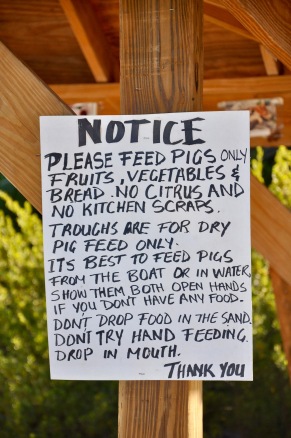 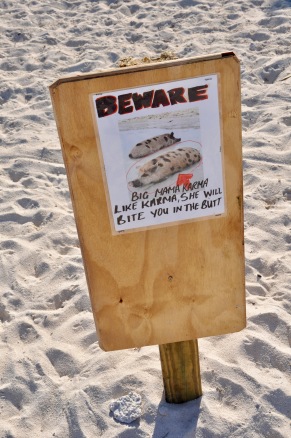 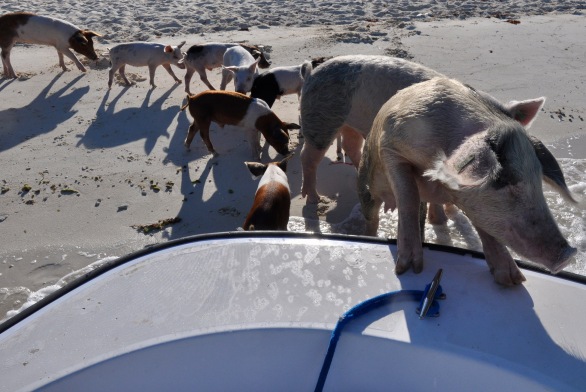 Would I recommend the trip? Definitely.  It didn’t come cheap, but was an unforgettable experience and worth evey cent.