I’m just back from my latest trip to New Zealand and this time took a different route, flying west from London to Los Angeles and then on to Auckland instead of the easterly route I followed before which took me via Singapore. Both flights were on a Boeing 777 but how do the routes compare and which do I recommend?

I was tempted by an excellent Black Friday deal offered by Air New Zealand. By signing up to email alerts with Secret Flying (you might remember their tip off saw me travel business class from London to New York for under £350), I learned of a special offer. Fifty flights were on offer for just £399, which is exceptional value for a trip that takes 26 hours in the air westbound and 24 coming back. I went online and uploaded my details to the Air New Zealand site in preparation for the offer to go live, saving valuable minutes and ensuring I was one of the lucky recipients.

In practice, one of the downsides to travelling in this direction is of course having to go through the US immigration process. An ESTA is required for UK passport holders even if they are only in transit; this costs about £10 but is valid for up to 2 years. I’ve just renewed mine and incidentally, it’s a more detailed form than before. On the outbound leg, passengers transiting on NZ1 were fast-tracked to some empty kiosks and desks which saved a fair bit of time on the regular queues. This wasn’t the case on the inbound leg, NZ2, when we were all directed to the main queue, adding about fifteen minutes to the process. 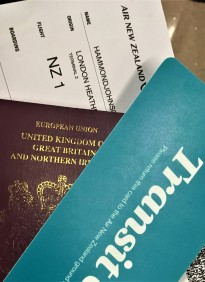 Though it isn’t necessary to fill out a customs form or clear customs, there’s still the requirement to queue through security. This took about fifteen minutes on both legs. NZ1 and NZ2 use the same plane for both legs, with suitcases remaining in the hold. Passengers must alight and take all hand luggage with them while the plane is cleaned and restocked. Some passengers only fly one of the legs. I found that the London to LA (and vice versa) part of the flight was considerably less full than the LA to Auckland segment.

I had hoped to be seated in a Skycouch row. Air New Zealand’s trio seats on either side of the plane are fitted with pull out, sturdy padded footrests which can be converted into a couch. You have to pay extra for this and not all reports are good, with some travellers saying it’s hard for a couple to get comfortable enough to sleep. For a comprehensive review of Skycouch, why not take a look at this excellent review from etrip.tips?

As a solo traveller, to be able to guarantee the use of one of these would have signifcantly increased my fare. On the inbound LA to London leg, the Skycouch adjacent to my centre section aisle seat was vacant. Cabin crew did not permit me to use it, however. Instead they moved a mother and baby there which is fair enough as they were more in need of the space than me. However, this kindness resulted in the family being split on opposite sides of the aircraft. Throughout the flight they came and went, knocking my seat and making sleep difficult for me. The baby slept soundly like, well, a baby.

The outbound leg was quicker than scheduled, taking 10 hours 30 minutes from London to LA, followed by a layover of 2 hours 5 minutes and then an onward flight of around 12 hours 30 minutes. Auckland Airport was very busy when we touched down around 5.15am and I wasn’t on the bus out of the airport until well after 7am. However, I was fortunate that my hotel room was available and after showering, enjoyed a pleasant day’s sightseeing without the need for a nap. Julia 1 Jetlag 0. Now I’m home, I can report to have been very tired for a few days but not very jetlagged as I was going to bed and waking at normal times. 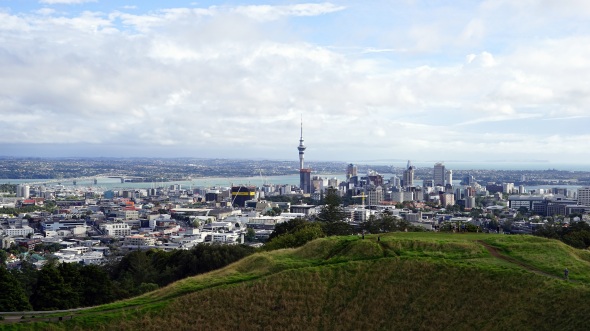 Though transiting the USA wasn’t an issue and there was no danger of missing the second leg of the journey as it used the same aircraft, the short layover wasn’t enough to stretch my legs properly, take a shower or have a sleep in a proper bed. The food and entertainment were both above average, yet over such a long time in the air I found the time dragged, particularly on the second half of the journey. Also, so many seats required additional payment (for extra legroom, priority boarding or of course the Skycouch option) it meant that the availablity of my preferred aisle seat was very limited. I checked in online immediately the systems opened but even so, only three aisle seats were showing as available and no window seats.

I’d call this the classic route for Brits travelling to Australia or New Zealand. Asian stopovers are a popular choice, and especially Singapore as Changi Airport has such a stellar reputation. I used Singapore Airlines in 2013 and wasn’t disappointed.

Outbound, I opted for an 8.30pm departure with Singapore Airlines, an overnight flight which reached Singapore at 4.30pm the following day. As my second leg flight didn’t depart until after 9pm, there was plenty of time to enjoy an unhurried dinner, a shower in the airport hotel and a stroll around the airport’s orchid garden. I could have visited Changi’s cinema to catch a movie, but figured there’d be plenty of opportunity for that on the flight itself.

The inbound flight departed Auckland at 12 noon, arriving in the Asian hub at about 7pm. I chose to extend the layover to facilitate a night in a nearby hotel. My second leg thrrefore left Singapore at 9am the following day, reaching London by about 3.30pm that afternoon. This didn’t come at any extra cost, and the chance to stretch out in a full length bed with decent bed linen was very much appreciated. I came back to the airport the following morning considerably more refreshed than I did arriving from LAX.

On both legs, I was easily able to secure my preferred aisle seat and would have been able to get a window seat if I’d have wished. Meals were good and the inflight entertainment system as good as you’d expect from an airline which regularly secures high approval ratings from travellers.

Where this option falls short, however, is the increased risk of jet lag affecting the first few days of your holiday. Some people swear by a stopover to give them time to adjust. Personally I think that just means you need to put your body clock through two changes in just a few days which isn’t ideal. However, it’s a good way of seeing a bit of Asia if you haven’t visited before. As well as Singapore, Hong Kong, Kuala Lumpur and Bangkok are conveniently located. Hubbing through Dubai is possible but the two legs are pretty uneven and it is hard to psyche yourself up for that second leg from Dubai to the Antipodes as you’ve barely covered a third of your total journey time at that point.

I found the overnight layover with a hotel stay made the Singapore option considerably less arduous. The lengthy outbound layover was also helpful. I’d done something similar with Malaysian Airlines to Sydney, hubbing through KL. That time, however, the jetlag was fierce and I remember stumbling around Sydney as if drunk on the first day before crashing and sleeping it off. I’ve read that for every hour’s difference in the time zones travelled, your body needs a day to recover. In practice, if you keep hydrated and try to sleep on the plane it can be considerably less than that. Arriving in Auckland from Singapore, I expected the jetlag to kick in, but in fact enjoyed a pleasant day pottering about Ponsonby before heading off to bed about 8pm.

So would I choose east or west next time?

Price would be a deciding factor but unless I got an especially good deal I’d pay a little extra to fly eastbound and a bit more on top to be able to have a night’s sleep en route. As I get older, I really need the rest, though as a twenty something, getting to NZ as fast as possible would rank higher in the list of priorities. I was lucky not to have to suffer a middle seat with Air New Zealand so I’d look for an airline which permitted seat allocations at the time of booking, something which is increasingly being phased out as airlines seek to raise income. What I would say is that the US immigration and security procedures and staff which tend to put a lot of travellers off transiting via an American airport really shouldn’t. I’ve noticed in the last few years that staff attitudes have improved immensely and the norm is now a polite and friendly welcome.

Have you flown from London to Australia or New Zealand? Did you do it in one go? Which route gets your vote?