Why you should visit the Armenia Genocide Museum and Memorial

On Tsitsernakaberd Hill, overlooking the city of Yerevan, you’ll find a pilgrimage site dedicated to the 1.5 million victims of the Armenian Genocide.  Their harrowing story cannot fail to move you, as it did me. 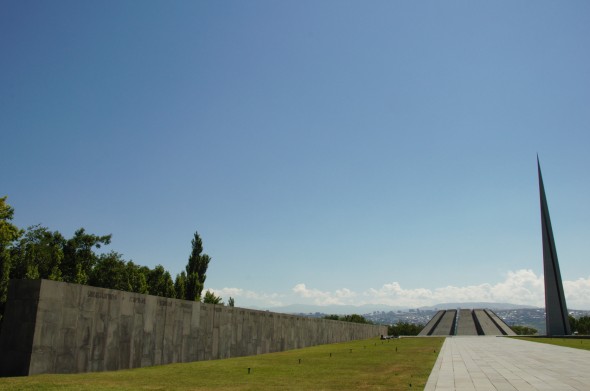 I sit, alone. The music haunts every inch of stone and every speck of dust. The sound of violins, melancholic yet soothing, permeates the soul. I feel it. It seeps into my heart and as I focus on the flickering flame, I raise a hand to my cheek, wiping a persistent tear. A few sorry bunches of carnations have wilted where they were placed. Tall slabs of basalt crush the sunlight. The sky is obstinately blue but in here, inside the stone circle, it’s a place of shadows and ghosts. I’m shocked at the strength of my feelings. Until yesterday, I hadn’t been aware an Armenian genocide had taken place. And I’m ashamed of that. 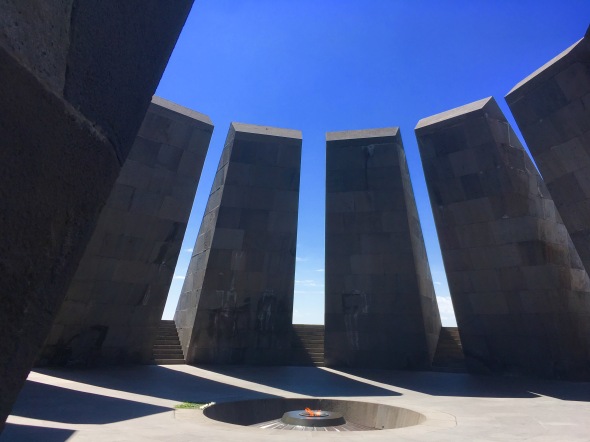 A cleaner arrives with her broom and sweeps, rhythmically, until my attention is forced out of its sad reverie. She busies herself collecting dead blooms and rearranging those that will stay. A young man follows her with a camera, framing and reframing his shots. He clicks repeatedly but then he too is still. A family of five arrive, speaking Armenian, and pose in endless configurations for snapshots beside the flame. The emotion I felt is lost and I glance at my watch. The museum is open. I head inside. 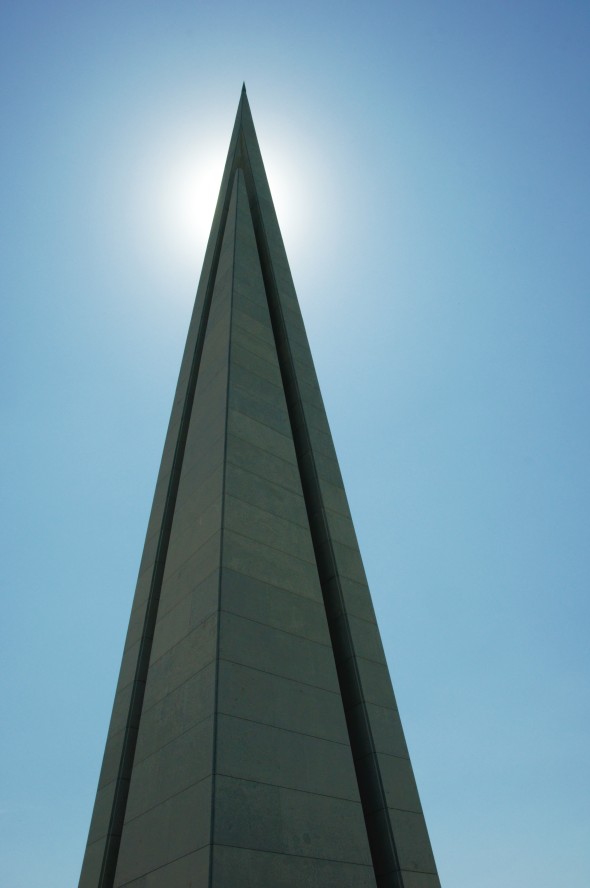 I read, missing nothing, trying to make sense of what happened. In the late 19th century, Armenia was a divided country. The Persians had ceded territories to the Russians, who occupied what was then known as Eastern Armenia. Strategically important Western Armenia had fallen to the Ottomans in 1555 and over four centuries later, they retained control. War between the Russian and Ottoman Empires had torn Armenia apart. Armenians living under Turkish rule looked to the Russians for protection but though the 1878 Treaty of Berlin set out basic rights for Armenians they were not honoured. Amidst growing calls for independence, Sultan Abdul Hamid, the leader of the Ottoman Empire, tightened his grip on the dissenters. Words were banned: Armenia, rights, freedom.

To ban the word freedom is an alien concept.  From my privileged life in a stable democracy, how could I understand?

Compelled, I read on. In 1895, 300,000 protesters were massacred in Constantinople in an attempt by Hamid to shut down the Armenian Question for good. It didn’t work. Nine years later, there was another uprising. The stability of the Ottoman Empire was under threat. In 1908, a political party called the Young Turks seized power. Their policy of the “salvation of the Turkish homeland” could only be achieved, they held, by the liquidation of the Christian population. Under their watch, anti-Armenian atrocities continued unpunished. A further 30,000 were killed in a market in Adana in 1909. Their treatment was horrific. Many were set alight or stabbed repeatedly. The backs of children’s legs were gored with cotton hooks leaving gaping holes. A series of photographs documented the horror.

I’m struck by the eyes.  They stare, vacantly, yet implore those watching to act. But it’s too late. I’m a century too late.

World War One was to provide cover for the vilest act of all. A secret treaty was signed, allying the Ottomans with the Germans. Needing the support of its largely Islamic population to survive, the Turks proclaimed Jihad in an attempt to demonstrate their religious credentials. In October 1914, 60,000 Armenians were called up to fight, joining others already conscripted. They fought, bravely, at Sarikamish on the Caucasian Front under Enver Pasha, but were no match for the wintry conditions. The Ottomans suffered huge losses and 70,000 lost their lives. A scapegoat was required. The Armenians were that scapegoat. Soldiers who had fought alongside Pasha were killed on his orders. Afterwards, the Young Turks turned their attention to civilians, murdering politicians, clergy, intellectuals and other eminent Armenians. Mass arrests followed, in Western Armenia and Constantinople.

The Armenian family I saw at the memorial see that I’m making notes. It’s diaspora season and they’re from LA, bringing their children to the home of their ancestors for the first time. They ask if I’m a writer and if I’m going to write about this. I promise them I will, emotion choking my words. The mother hugs me, an unspoken thank you.

Unarmed Armenians in Ottoman territory were rounded up to be sent to the deserts of Mesopotamia and Syria, their property looted as they left. Men were separated and stabbed. Women, children and the elderly were spared, but instead driven south. On the way, their police and army escorts stood by and did nothing as bands of Kurds and Turks kidnapped and murdered the helpless. Those who did complete the journey ended up in concentration camps. In Rakka, Bab, Deir Ez-Zor, Ras Ul-Ain and Meskene, 600,000 endured horrendous atrocities. They were subjected to medical experiments, pregnant women were used for target practice, bare feet were shod as if they were horses’ hooves, children were burned alive or dragged behind horses until they died from their injuries. Rape was common. An estimated 600,000 lost their lives. 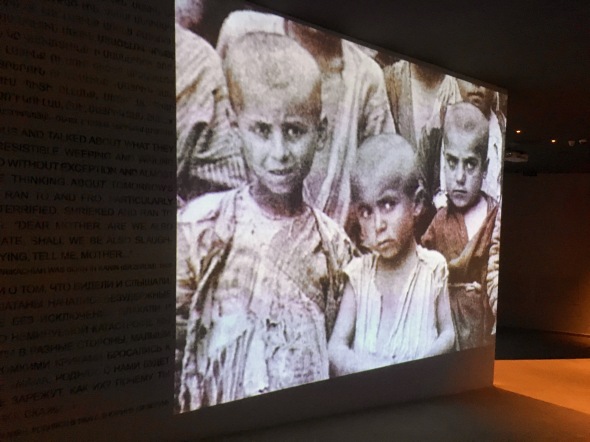 It’s hard to reconcile what I’m reading with the gentle and welcoming Turks I’ve met on my travels. I’m shocked to find I’m upset, not because I think it’s not worth getting upset about, but because at Auschwitz and Bergen-Belsen and Dachau, I haven’t been. Sobered, desperately sad, but not upset like this. The tragedy that befell the Armenians feels worse, somehow, because I wasn’t aware it had happened. I feel that in some way that means I’ve betrayed them.

On May 24 1915 France, Britain and Russia issued a joint statement condemning and declaring the Turkish government responsible for a “crime against humanity and civilisation”. After the war, the Young Turks were brought to trial. The key perpetrators – Mehmed Talat, Ismail Enver and Ahmed Djemal – were brought to justice and punished for what they’d done. Yet today, the mass extermination of Armenians isn’t acknowledged by all countries. Britain views what happened as a war crime and doesn’t recognise it as genocide.

I climb, slowly, from the bowels of the museum back up into the sunshine of the plaza, legs and heart heavy. Another tear escapes from my eye but this time, I let it fall.

To visit the Armenian Genocide Museum and Memorial it’s easiest to take a taxi.  From Republic Square I paid 700 drams, just over £1.  The museum is free to enter.  Leaving, the unofficial taxis in the car park were asking for 2000 drams for the same ride.  I walked down the hill and across the footbridge to the Dalma Garden Mall, from where I caught the #27 marshrutka back to Mashtots Avenue for a 100 dram fare.  The bus stops right outside the Blue Mosque, also worth a visit.