It’s been a long journey involving an overnight train and a four hour ride in a marshrutka, but I’ve finally reached Svaneti.  My base is in Mestia and I’m writing this holed up on the hotel balcony overlooking three of the famous towers that dot the village.  The birds are chirruping and the neighbour’s dog is letting me know if anyone walks up the rutted and very steep road that joins us to the main drag.  The sun is valiantly making an attempt to break through today’s persistent low cloud, but tomorrow’s forecast promises sunshine and blue skies.

I spent yesterday travelling along the Georgian Military Highway, the route linking Tbilisi to the Russian border.  The epithet “military” conjures up all manner of images, but you won’t see tanks or soldiers, just great scenery.  I travelled with Envoy Tours in the capable hands of their guide Beqa.  He was great fun, doing everything he could to ensure my Singaporean travelling companion and I had a fun day.  From tour guide to chef to toastmaster, there was nothing he couldn’t turn his hand to. 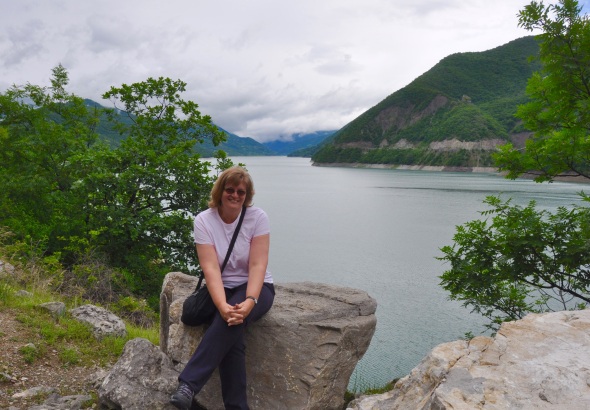 Our first stop was on the edge of the Zhinvali reservoir built in the 1980s to supply water to Tbilisi.  It’s a picturesque addition to the landscape, though one that necessitated drowning several villages.  The water level was high enough to conceal them yesterday, but when the water level is low, sometimes the tops of churches can be revealed.

We skirted the edge of the reservoir to reach the fortress complex of Ananuri, where they were selling these fabulous sheepskin hats.  Once, there was just a tower here on a hillside; now there’s a cluster of buildings with defensive towers and a 17th century church featuring ornate carvings.

It was the first time I’d been asked to wear a skirt over my trousers as well as the headscarf I’d been expecting.  Not the most elegant of looks, of course, but when you’re in someone else’s country you play by their rules.  Inside the church walls bear a few faded but interesting frescoes.  When Georgia was under Russian rule the frescoes were whitewashed and are slowly being restored.

While the tallest tower was off limits, it was possible to climb the smaller one.  I’ve no head for heights, so the narrow, worn steps missing a handrail had my heart missing a beat.  With plenty of encouragement, my two younger companions got me to the top.  Inside, each level was surprisingly spacious, with a fireplace and plenty of room to live.  These towers would have been hiding places when the area was under attack.  The castle’s dungeon was quite claustrophobic in comparison.

Heading north from Ananuri, the road took us past the ski resort of Gudauri and over the 2379m Jvari Pass.  Next stop was the Georgia-Russia Friendship Balcony.

Our guide, no fan of Russia, was quick to point out that it was built in 1983 when Russia was still in charge and Georgian independence was eight years off.  Despite its name, the monument was very tastefully done and its multiple balconies were perfect for capturing a shot of the dramatic mountain scenery which formed its backdrop. 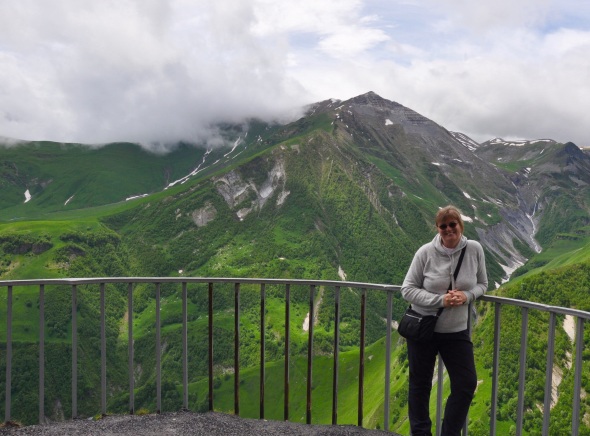 Our last port of call was right near the Russian border near the town of Kazbegi in a little place called Gergeti.  Lunch had been arranged: my first experience of a Georgian stupa or feast.  First, though, we had to make the local dumplings known as khinkali.  Pastry had already been made and rolled; a spicy lamb filling had been preformed.  All we had to do was assemble it, which involved lots of pinching of pastry and some rather dodgy looking shapes.  Our hostess demonstrated a far higher level of skill, putting together a double decker khinkali quicker than we could pick up our cameras.  They were delicious, though I resorted to using a fork instead of eating them the traditional way – bite off the top, drink the juice and then munch on what’s left.  Beqa proved to be a good toastmaster too, ordering us to raise our glasses at regular intervals through the meal to God, peace, ancestors and women. 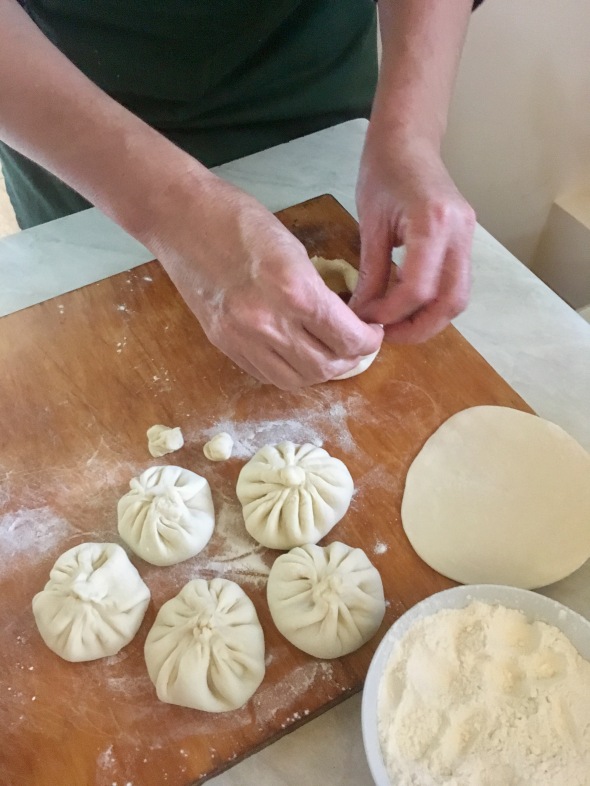 A hike had been planned.  The Tsminda Sameba church, also referred to as Holy Trinity, is perched high on the mountain pastures above Kazbegi.  Apparently there was once a cable car (those Russians again!) but the locals were none too impressed at having a sacred place defiled so they tore it down.  A bumpy road led up to the church, but, said Beqa, it didn’t take much longer to walk up.  Yeah right, if you were a goat maybe.  The others walked, but told me later – as I’d suspected – that the path was pretty much straight up to the church and not an easy hike.

I took the minibus option, to my later relief, though that in itself was a hair-raising experience.  Deep ruts characterised the gravel track for much of its length.  In a couple of places the road had fallen away altogether.  At the top, heavy rain made the pastures soft.  I held my breath as we screamed across the grass, deep in some other vehicle’s tracks.  How we didn’t get bogged down I don’t know.  That fate was to befall someone else later, much to everyone else’s amusement. 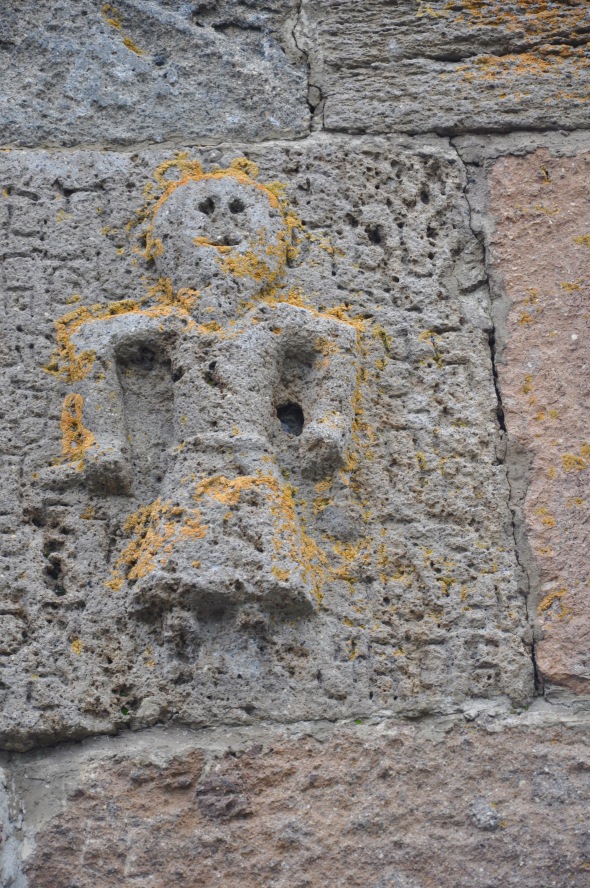 The church was as impressive as its setting, though cloud obscured the 5047m Mount Kazbek which can be seen on a clear day.  Inside simple candles stood in sand illuminated the icons and other works of art that adorn this simple church.  Despite the constant tramping of tourists’ feet (including mine, of course) it had a spiritual feeling, perhaps not surprising as it is a working church to this day.  The forecast rain that had held off all day materialised while we were at the church and so we all headed down by minibus.  Come down on foot when it’s slippery like that and you may as well be on a toboggan.

For more information on Envoy Tours and to book this Embracing Georgia tour, please visit their website: