With last week’s shock Brexit decision, the pound has slid against the dollar and the euro, making the UK a cheaper destination for foreign visitors. Whether you’re flying in from abroad on the back of an advantageous exchange rate or a Brit now planning a staycation, here are a few of my favourite English coastal destinations to whet your appetite.  You don’t even need sunshine for a great holiday – which is just as well given the summer we’re having so far.

Dorset’s Jurassic Coast is one of my favourite spots.  As a former Geography teacher, this stunning coastline packed with headlands, bays, arches and stacks never fails to disappoint.  The walk across the cliff top from Lulworth Cove’s almost perfectly circular bay to the drama of Durdle Door has surely got to be among the best in the country as far as I’m concerned.

From the old windmill at Cley-next-the-Sea to  the vast expanse of sand that forms Holkham beach, this small stretch of coastline punches well above its weight when it comes to visitor attractions per square kilometre.  So close to London and yet a world away, whether you choose to  take a seal boat trip from Blakeney, take a hike across the marshes (some of these seaside towns are no longer sea-side) or hole up in one of the many excellent local pubs you’ll love it enough to be sure to return. 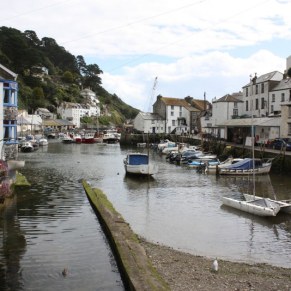 No discussion of England’s best coastal destinations could be complete without reference to the west country and pretty though Devon is, Cornwall just has more character in my book.  It’s hard to pick a favourite – this is a part of the country where you’re truly spoilt for choice.  Polperro, pictured, has a lot of charm and perilously narrow access for those who blindly follow their Sat-Navs into town.  If in doubt, take the locals seriously when they advise that some routes are not caravan friendly  – and by caravan, they mean anything wider than a bicycle.

As an Essex girl, you’ll have to forgive me for a list biased towards the south, but doing my degree at the University of Leeds has left a lasting fondness for God’s Own County.  Many a happy field trip was spent perched on a cliff sketching this dinosaur-like rock formation at Flamborough Head known as High Stacks, but to save you from some water-damaged and decidedly tatty field sketches, here’s a photo instead.

Antony Gormley has excelled himself with this installation, titled “Another Place” which, after being exhibited in various European locations has found a permanent home at Crosby Beach just north of Liverpool.  A hundred cast iron figures stand in the mudflats at low tide, staring at the horizon until the incoming tide buries them in water and sand.  People say it’s a haunting sight, and it’s one I’m looking forward to seeing for myself when I’m next in the area.

What are your favourite parts of the English coastline?

I could easily continue this blog: the best fish and chips in the world at Aldeburgh, Suffolk; the imposing castles of Northumberland; Brighton’s iconic Victorian piers and more. The beauty of Wales, Scotland and Northern Ireland will be the subject for another time, but for now, where would you say is a stand-out for you?  And where have you always wanted to visit?  I’d love it if you would share your English coastline tips by commenting on this blog.

This entry was posted on June 29, 2016 by juliamhammond. It was filed under Destination information, Europe, Independent travel, Travel advice and information, Travel guides and was tagged with Brexit, Britain, Great Britain, UK.