Dude ranch vs. working ranch – how do you know what’s best for you?

Yee-ha!  There’s still some kind of magic associated with the cowboy lifestyle, isn’t there?  I don’t know about you, but seeing a man in chaps astride a horse is enough to get me all of a tizzy.  Back home (and I’m not referring to my husband here) men can seem just a little too in touch with their feminine side.  Out on the ranch, though, as they gallop off leaving a trail of dust behind them, well, it’s work for real men…

Yep, a ranch holiday is for me.  But whether to spend my holiday on a dude ranch or on a working ranch was too difficult a choice – so I booked both.  How did they compare?

Panagea Ranch, located an hour outside Tacuarembó in Uruguay, accepts visitors but expects them to get involved in ranch life.  Juan inherited the ranch that his grandfather bought and has an emotional commitment as well as financial to the place which is obvious almost as soon as you arrive. 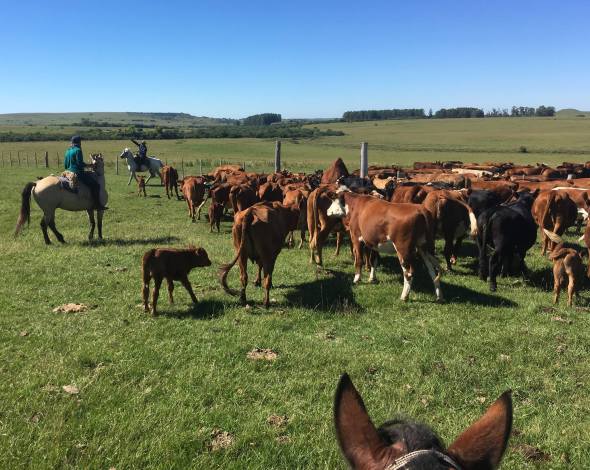 During my stay, getting involved meant riding out to check on the progress of a sick sheep (and finding it incredibly quickly considering there are 1800 of them!), rounding up some of the 1100 head of cattle to move them to new pasture and herding them into the dip so that they could be treated for ticks.  It was hard work for a novice rider (though they don’t require any prior riding ability, it helps to have spent at least a bit of time in the saddle) but there was also a huge sense of accomplishment.

In contrast, the Dixie Dude Ranch, on the outskirts of the Cowboy Capital of the World (that’s Bandera, Texas if you didn’t know) offered more of a vacation experience.  It has been welcoming visitors since 1937 and offers sedate trail rides, hiking and a huge pool with hot tub.  There’s evening entertainment too.  On the first night, we were treated to a ride in a hay cart to feed the couple of dozen longhorn cattle that can be found on the ranch. 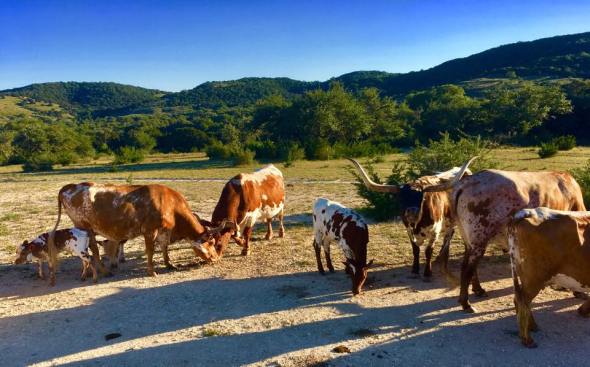 The next, we were treated to a show by a trick roper who was in town for the Bandera rodeo before heading off to Morgan Freeman’s 80th birthday party.  Marshmallows were also provided to toast over the campfire.  I travelled as part of a group and so we enjoyed relaxing by the fire in the evening – it’s a great place to head with a group of friends, though you may wish to stop off at Walmart on the way in as no alcohol is provided.  They’re fine with BYOB.

In Uruguay, Juan Manuel was a little gruff at first but has a heart of gold and a genuine desire to both learn more about his guests and teach them how his ranch works.  The sole female in a group of men on the first night, things were a bit macho at the start, but I did warm to Juan and have a huge respect for what he does.  Susana makes you feel like one of the family from the get-go.

Accommodation provided by Panagea is, by their own admission, fairly basic.  Rooms were comfortable but when the ranch is full, single travellers might need to share.  The beds were firm and everything spotlessly clean.  Hot water is usually available but electricity is only available for a couple of hours each evening. There’s no WiFi.  To be honest, I enjoyed that.  It made me focus on the outdoors and I slept more soundly as a result.  I also thought it was excellent value at US$65 per person per night full board including activities.

Dixie Dude Ranch is more akin to holiday accommodation with a range of chalets for guests and WiFi near the main building (though guests are asked to limit data usage due to restrictions outside the control of the ranch).  I stayed in one of the oldest cabins, which was a little more basic than the newer ones.  The latter were spacious enough to contain armchairs and even a fireplace.  Water is sourced from the property’s well which was temporarily down one morning during our stay; service was resumed rapidly.  My only niggle was the noise from the air conditioner which interrupted my sleep!  As you’d expect, accommodation in the States is more expensive than in South America.  Dixie Dude Ranch charges $165pppn for single occupancy and $145pppn if you share.

Both ranches welcomed guests on a full board basis.  At Panagea, Juan’s wife Susana was an incredible cook and the food was in equal parts tasty and plentiful.  When Susana’s in town, Juan cooks, and he does a mean barbecue.  Dinner is when everyone’s back and the fire’s going; preparing, setting the table and eating is a communal affair with the family.  Juan loves to promote Uruguayan wine and will happily toast to that with his guests.  In the mornings, everyone helps themselves to what’s there; the wood-fired range was somewhat different to the induction hob at home but a fun challenge to master.  The food at Dixie Dude Ranch was good too (though not quite to Susana’s standards) and there was plenty for second helpings.  Service there was attentive and sincere.

Which ranch stay would I recommend?  I enjoyed both of them immensely, but in terms of the experience, it will be Panagea which I’ll more fondly remember.  I think it’s probably because I felt a real sense of achievement there.  As a novice rider who’s just about mastered a trot, I didn’t have the confidence to think I could help to herd cattle until Juan showed me I could.  He is a great fan of making people step outside their comfort zone!  Juan claims he can teach even a beginner in just a few days but I was glad I’d had a few lessons back home to learn the basics.

But I think if I’d never been on a horse before, Panagea might have been a bit too ambitious.  Being able to mix riding with other activities (such as lazing by the pool or watching the hummingbirds come and go on the front porch) made Dixie Dude Ranch a great choice for a relaxing holiday.  But get those riding lessons booked so like me, you can make it to Uruguay one day!

First day on the ranch

At the beginning of this year’s South America trip I spent a few days on Panagea Ranch just outside Tacuarembó, Uruguay.  Tired from the journey, recovering from a sickie bug I’d picked up at home and generally in need of some R and R, I spent the first day stretched out on the veranda doing very little at all.

And it was great!

Here’s a few thoughts on what I saw without moving a muscle (well, almost!) 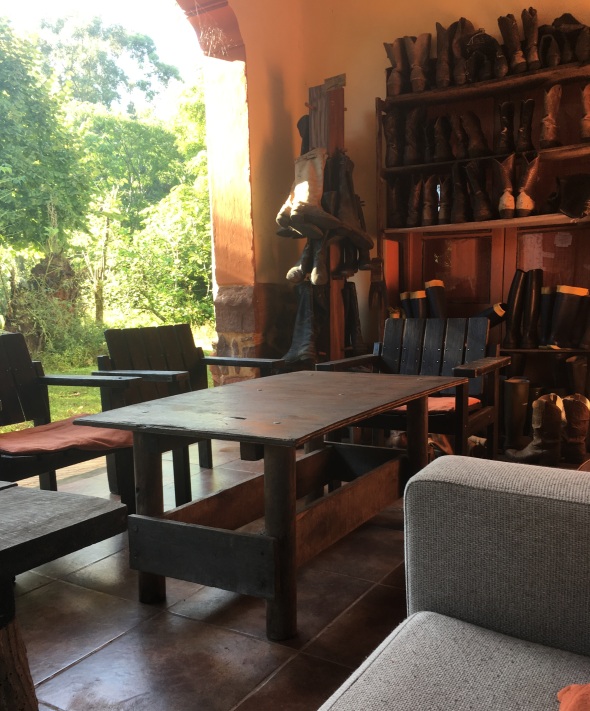 Waves of sleep ebb and flow like the tide.  Coming to on the lumpy leather couch, I try to shake off the fatigue which has enveloped me since breakfast.  The sky is almost free of clouds and it is unseasonably warm for March, but the red and sticky earth is a reminder that rains are frequent at this time of year.  The dappled sun casts a soft light on the worn out boots hanging from the racks beside me on the veranda, illuminating patches of dried mud and scuffed leather.  A languid breeze ripples the wrinkled leaves of a huge shrub in the bed in front of me.  It has just enough energy to nudge at the twisted limbs of an ageing aloe, though even that is more energy than I can summon up.
A pink sow ambles past the veranda, teats swaying gently.  She snuffles and grunts as she pauses, systematically scouting the overgrown garden for scraps.  The pig loops the farmstead, making her way back to the three chattering piglets she left foraging in the paddock.  Soon she’s followed by one of the horses, grazing loose after an early morning hack, who potters around a bit before plumping for a spot outside the shower block.  I follow too and rest my arms on a metal gate.  From there, I can see a small group of merino sheep up on the ridge, specks of creamy white wool punctuating a sweep of emerald pasture.
To my left, a small stand of ghost gums provides cover for a rhea.  It pecks contentedly in the dirt, grey feathers ruffling gently in the wind, until it’s rattled by the sound of a dog barking.  Losing its nerve, the rhea skitters off across the damp leaf litter, disturbing its mate in the process.  They hurry out to the safety of the grass beyond the gate, in case.  The dog can’t reach them there.  But later, they reappear in the same paddock where earlier, the dog had been playing with a stick.  Rich pickings reward the brave.
The pitter patter of assorted hoofs and paws is accompanied by a soundtrack of bird calls.  A rhythmic shooshing like fingers raking an old washboard is laid down as a backing track.  Chirrups and juddering caws provide the percussion.  A tiny yellow bird the size of a sparrow darts in and out of a nearby tree.  Another squeaks with the staccato sound of an old bike brake that needs oiling.  The trees hum, their leaves concealing what sounds like a swarm of bees though in reality to my untrained ear could be any kind of insect.  Something is making the whining sound of a power tool grating on metal, but it can’t be a person; everyone’s quiet, or out riding already.
I wander back to the battered sofa on the porch and let my heavy eyelids close.  The hypnotic sounds work their magic and I doze off again.

There’ll be more about the ranch in another post; find out how I got on as a novice rider herding cattle and rounding them up to go through the tick dip.