On the trail of the mob in Havana

The classic American automobiles that cruise the Malecón ooze the glamour of bygone days, but 1950s Havana had a seedy alter ego. Mob-run casinos drew a decadent crowd. Vices of all kinds took centre stage. Traces of this era of such excess can still be seen today – if you know where to look.  Curious, I contacted Havana Super Tour and asked guide and founder Michael Rodriguez to let me in on a few of Havana’s dark secrets. Waiting to take us back in time was an immaculate silver grey Pontiac driven by owner Ricardo. Michael joked that Cuban men value their cars more highly than anything else in their lives – even their women. I’m not convinced that’s true of only Cuba.

We began where the charmingly decrepit mansions of Habana Vieja give way to the boulevards of Centro. Gambling is banned in today’s Cuba, but the old casinos have been repurposed as conference rooms and elegant salons in many of the capital’s most renowned and once notorious hotels. One of them is the historic Hotel Sevilla. I’d stayed there during my first visit to Cuba fifteen years ago and around the corner from the exquisite Moorish-style lobby where I’d once checked in is a rogue’s gallery of past guests – good and bad. This time my focus was on the latter. Michael steered me towards a photograph of Al Capone, perhaps Chicago’s most notorious gangster, who used to book out the entire sixth floor when he was in town. Privacy comes at a price when you need to make sure no one eavesdrops.

Michael led me across the street to a tiny store selling antiquarian books and other memorabilia from times past. Leafing through a folder of old black and white photos, he showed me how some of the Cuban capital’s hotels would have looked in Batista’s day and in the years immediately following the overthrow of his government. The city was the place to see and be seen. Hollywood’s biggest names came in their droves with Frank Sinatra leading the pack. Scandal was never far away. Michael reckoned that despite rumours that Sinatra’s singing career had initially been financed by the mob, he was clean – in Havana anyway. Some of his associates, however, were not.

The biggest player of all on the Havana mob scene was an East European Jew who’d come to the USA to reinvent himself. Smart as they came, Meyer Lansky grew up in New York with Lucky Luciano. Lansky was the brains to Luciano’s brawn and together, they made a formidable pair. You messed with them at your peril. Having operated out of the Nacional for years, Lansky had his hands in a number of other businesses, including the successful Montmartre Club which was eventually torched by a revolutionary supporter in the early 1960s.

Over a Mafia mojito at the Nacional. Michael told me that it was common for a Hollywood name to provide a respectable front for the money laundering, shady deals and violent altercations that were going on behind the scenes. Actor George Raft got his big break in the 1932 gangster movie Scarface. When New York mobster Santa Trafficante Jnr. opened the Capri, he needed someone to be its respectable public face. But though it was commonly held that Raft owned a sizeable stake in the hotel, Nicholas Di Costanzo, Charlie “The Blade” Tourine and Santino “Sonny the Butcher” Masselli operated it. It doesn’t take a genius to work out that many of the regular clientele were anything but legit themselves.

Lansky himself opened the Riviera Hotel in 1956 as a front for his deals. It was one of many businesses through which he could launder his ill-gotten gains. Though he claimed Cuba ruined him when Castro rolled into Havana, under Batista’s regime he’d lived like a king. Despite decades of ruling the organised crime roost, the only crime the authorities ever managed to pin on him was a charge of illegal gambling. 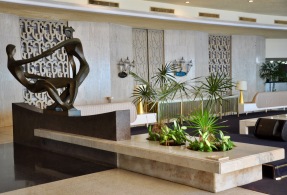 The Riviera, our last stop, could have been a set from the hit US TV show Mad Men, had US-imposed sanctions not restricted where the studio’s dollars be spent. Mid-century modern might be back in vogue, but you’ll be hard pressed to find somewhere where the fixtures and fittings are as original as the furnishings. Walking through the doors of the Riviera Hotel was like stepping back in time, its 21st century patrons sticking out like a sore thumb in their modern apparel. Its casino was now a meeting room, the showy chandeliers the only clue to its dazzling past. 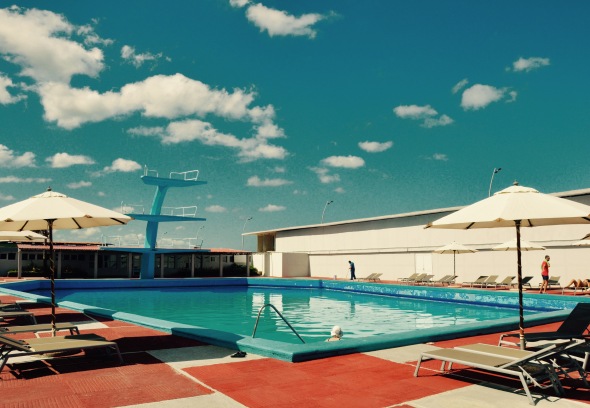 Out back the pool had a turquoise diving board that just needed a girl with an hourglass figure and a red halter neck bathing suit to complete the picture postcard shot. Instead, an elderly lady with a white swimming cap and cellulite for thighs glided at a leisurely pace through the sunlit water. Michael suggested I took a closer look at the shape of the pool which had been constructed, aptly macabre, to take the form of an open coffin.

This is a chapter of Cuba’s history that is overshadowed by Che Guevara and Castro’s revolution, but it’s no less compelling. After Batista was kicked out, Havana under Fidel’s leadership cleaned up its act. But there’s still plenty of tangible evidence to make this a fascinating tour and if you want to see a side to Havana many travellers miss, then this is most certainly it.  It’s one thing reading the story, but nothing compares to standing in the same spot of some of the 20th century’s shadiest characters.

Havana Super Tour is a rarity in Havana, a privately run enterprise which specialises in subjects as diverse as Art Deco, architecture, African religion, art or Hemingway. Alternatively, work with Michael and the HST team to design a bespoke tour to suit your own interests. Your classic car leaves from Casa 1932 at Campanario 63, a couple of blocks from the Malecón in Centro. The highly recommended Mob tour costs 35 CUCs per person, minimum two people, with transportation in a vintage automobile of course. Contact HST by email at elandarincarvajal@gmail.com or visit their website at:

The views expressed in this piece are my own, though I’m grateful to HST for offering me a private tour for the price of a group outing.