During my trip to Uganda I stayed at the three backpacker hostels in Kampala. Each was very different, so if you’re looking for cheap accommodation in the capital, my reviews might help you decide which is best for you. 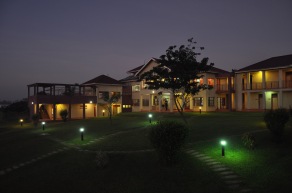 The clue’s in the name with this one – it’s tucked away at the end of one of the roads leading south from Kampala’s city centre. It’s as much a resort as it is a hostel, with a sizeable swimming pool as well as two bars. Day guests can pay for the use of its facilities, but it retains a backpacker vibe nonetheless. Staff are helpful and efficient.

The location is both Red Chilli’s biggest plus and its worst drawback. Because it’s so far out of the centre – around 10km from downtown – it’s inconvenient if you intend to visit the city’s sights. Traffic is horrendous, so that 10km journey can easily take an hour or more of frustrating stop-start driving, more in rush hour. If you’re coming into the city on a tourist shuttle such as Pineapple Express, note that drop off will be at the Oasis Mall, still a considerable distance from Red Chilli. 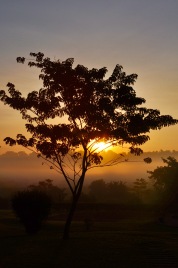 That said, if you’re looking for a place to unwind as part of your Ugandan or East African trip, it’s the perfect spot. Security’s excellent – all cars entering the compound are checked thoroughly, with mirrors used to check the underside of the vehicle. Guards on the gate are also a reassuring presence in this relatively remote location. The views across the valley to the surrounding countryside further distance you from the hubbub of the city and it’s a surprisingly peaceful place. Sunrises are spectacular and well worth rising early for.

The multiple accommodation blocks contain a range of room types, from dorms to private ensuites. The latter are roomy and are equipped with fans and showers that actually deliver hot water. I slept well, cocooned from the noise of those socialising in the bar. The room was basic but clean.

Red Chilli Hideaway is the sister property to Red Chilli Rest Camp up at Murchison Falls. I took the three day budget safari, which costs $320pp in shared tents and about $80 extra if you upgrade to a self contained banda. It was well organised and well thought out, and though the distance travelled was considerable, the two included game drives and boat trip made the package excellent value for money as well. The safari price includes a free dorm bed the evening before – it’s definitely a good idea to stay in order to avoid a ridiculously early start just to reach Red Chilli itself.

Yes, if I was looking for a place to stay put rather than get around.

If you’re looking for a sociable backpackers then this is the pick of the bunch, but I also found it to be the noisiest of the three. Located on busy Acacia Avenue, there’s a constant buzz of traffic as well as considerable noise from the immediate vicinity – bells ringing when people asked to be let in and chatter for instance. My single room was tiny, the bed taking up the whole of the window side of the room, making it difficult to access the window. There was a small hole in the glass, so even with the window shut, it wasn’t remotely soundproof, though mesh and a mosquito net ensured I wasn’t bothered by the bugs.

The showers and toilets were in a room a few doors down the corridor. They were clean and the water was hot. I rented a towel for 4000 shillings (a little less than £1). However, there was no door to the bathroom itself and (unlike the rest of the rooms in my section) my room had mesh above the door rather than a solid wall. The noise from flushing toilets and running water was therefore bothersome. I managed about three hours sleep which wasn’t ideal. 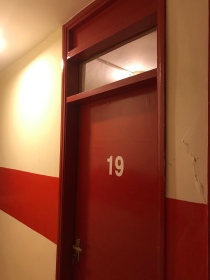 Where Bushpig scored highly was in its food. There was an outdoor bar with tables. An extensive menu sold really tasty food at reasonable prices and it was a popular place to entertain friends as the number of visiting diners indicated. Staff were approachable and helpful. The manager went out of his way to get me connected to the WiFi when my devices were being uncooperative and it proved to be the speediest once I was online. Also, the reception staff helped me figure out the location of the relocated Post Bus service as well as sort me out with a reliable taxi.

Probably not, on account of the noise, though it was a temptingly convenient location. However, I would definitely visit for the food and atmosphere in the bar garden.

Cost of a single room with shared bathroom $25, which represented the best value of the places I stayed

Occupying a site in a quiet side street close to Acacia Mall, this backpackers had the most convenient location. It was the smallest of the three and felt the most basic. My single room was directly off the main dining room, which could have presented a noise issue had there been more guests, but in fact I got a good night’s rest. Staff were efficient, and my driver for the late night airport transfer was waiting for me outside Entebbe Airport. However, I didn’t get the sense that they were especially bothered if I was enjoying myself and came across as a bit bored by the whole customer service thing.

The shower room was very basic. The cubicles were fairly clean but the windows and walls were grubby and there wasn’t much space to hang clothes or a towel while you showered. The water was almost cold, adding to the monastic feel. Though it was dearer than Bushpig, the room was larger, but the facilities were definitely a lot more rundown and in need of modernisation. I only ate breakfast here, and that too was basic. There was a lounge and several traditional hostel noticeboards where you could post requests for shared rides and the like.

I did like the garden area, which was a tranquil spot to sit and enjoy a drink with plenty of shade. You could qualify for a free beer if you went litter picking in the vicinity of the backpackers. Just outside the gate, Uber bodas (motorcycle taxis) congregated and I had no difficulty organising an Uber car and driver when I needed to go into the centre of the city a short distance away.

Possibly. Despite it being the most basic, it functioned well and its proximity to the Acacia Mall and a number of cafes and restaurants helped.

Cost of a single room with shared bathroom $34, a little steep given the quality but admittedly reflecting that it was significantly larger than the room at Bushpig.