Five foods you must try on your travels

I love food.  I love travel.  And I love nothing better than combining the two.

The more I’ve travelled, the more adventurous I’ve become with the foods I’ll try.  Some I’ve enjoyed, others not so much.  There’s not much I’ve regretted eating, apart from the vile black chuño potatoes that popped up from the bottom of my soup bowl in Peru together with a wrinkled chicken’s foot.  Dried in the Andean sunshine, chuño potatoes are bitter and a staple of altiplano cooking.  And I hope I never have to eat one again as long as I live.

But here’s what I would recommend.

It took a while for me to pluck up the courage to try cuy, for cuy is guinea pig and where I come from, guinea pigs are for cuddling.  But in Peru, they’re for eating and have been for at least 5000 years.  It’s such an iconic dish they even have a national holiday for the fluffy creatures – it’s the second Friday in October.  Roasted cuy, particularly if you ask for it to be served with the head removed, isn’t likely to induce a gag reflex.  It’s tasty, albeit rather fiddly to pick off the many small bones.  It tastes not dissimilar to the dark meat of a chicken – though doesn’t everything?  You won’t find it very filling, but it’s often served with a huge potato, so that should fill you up.

I’m not going to try to con you that hákarl is going to be the holiday taste sensation you try to recreate back home in your own kitchen.  Like chuño potatoes, once was enough for this fermented shark meat which is an Icelandic delicacy.  But unlike chuño potatoes, I’m glad I tried hákarl, and unlike Gordon Ramsey, I didn’t spit mine halfway across the room either.  It had the texture of a piece of Parmesan that’s gone hard in the back of the fridge and a pungent ammonia-like aroma which didn’t endear it to my nostrils.  Try it and see how bad it is.  But don’t expect to see the locals doing the same.  Sense has prevailed and they no longer eat the stuff.

Suckling pig on a lechonera spit

Guavate, a short drive from the easternmost point of the Ruta Panorámica, is home to the tastiest suckling pig that I’ve eaten anywhere. On Sundays, half the island’s population winds its way up the steep switchbacks to eat at one of the village’s many lechoneras. Whole pigs rotate on spits, drawing in the punters, while chefs armed with machetes hack the glistening animals into bite sized pieces. This isn’t fancy dining: you’re just as likely to get a lump of bone as you are a hunk of melt in the mouth pork, but the crackling is first rate.

Don’t think for one minute that because this is a photo taken through a shop window, these yummy yemas didn’t make it into my sticky hands.  They did, and I enjoyed them so much I went back for seconds, much to the bakery assistant’s amusement.  Central Spain is good for pastries and these were an improvement on the already delicious yemas I’d tried a few years before in Ávila, a couple of hours to the north-east of Trujillo.  Eat them on an empty stomach as they are filling and sickly sweet. 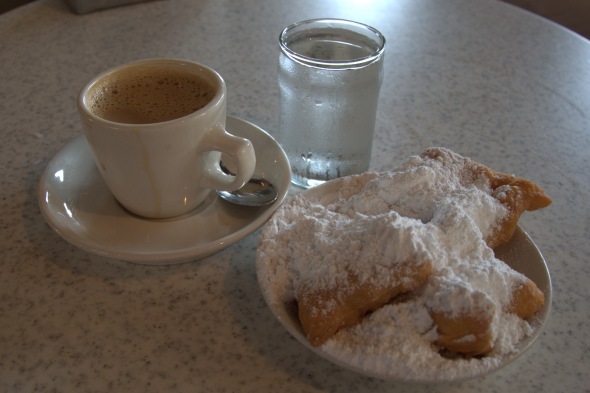 My final choice – and what a tough job it’s been whittling the list down to five – comes from New Orleans.  No visit to the Big Easy can be complete without sampling the beignets at Café du Monde in the heart of the French Quarter.  Brought to New Orleans by the French in the 18th century, these fried sweet balls of dough are served hot and buried in icing sugar.  Take them as I did with a cup of chicory coffee, another local speciality.

There are as many must-try foods that I’ve left off the list as included on it: lemony yassa poulet in Senegal, freshly caught lobster in Maine or snow crab in Seattle, Salzburger Brez with cherry filling, real Italian gelato, Swiss fondue…  What would your top five be?