One of the unexpected bonuses of a week of showery weather was that we did a lot more sightseeing in Puerto Rico than we’d originally planned.  A visit to see Arecibo’s Observatory with a huge radio telescope hidden away amongst the wooded karst scenery of the island’s interior was on the cards after we “discovered” it on the map we’d been given by the hire car company.  It was a bit of a trek, reached by a winding road up a mountain and then, phones set to airplane mode, a climb up a seemingly unending flight of steps to get to the Observatory’s visitor centre.  Stepping out onto the observation deck out the back, it was worth the effort when this was the result: 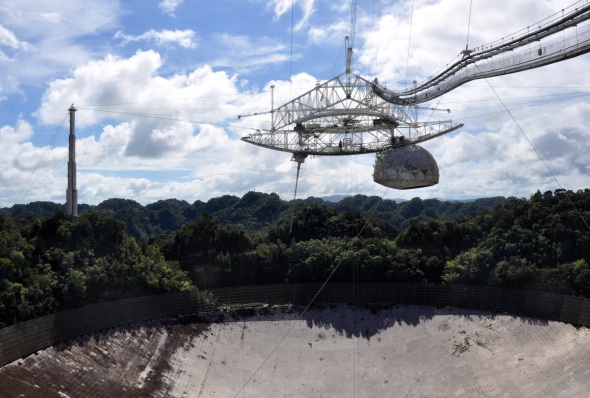 If it looks familiar, then you might well be a Bond fan, albeit one with a better memory than me.  Much as I love the Bond films, they do seem to be hard to tell apart.  The sequence shot here in Puerto Rico comes from the 1995 Pierce Brosnan film Goldeneye.  The dish shaped telescope that you see above was flooded and drained for a climatic chase scene which proves just how different a location can be once the movie makers get their hands on things.  There’s a good YouTube clip here if you want to see for yourself:

You might also remember that this was where they filmed the Jodie Foster movie Contact.  The storyline revolved around her research into SETI, which is an acronym for Search for Extra-Terrestrial Life.  In a twist, they actually do SETI at the Observatory.  Any sounds from space will be picked up by the radio receivers, which hang down, suspended in liquid helium so they don’t overheat and so that any incoming sound is magnified.  I have this  idea in my head that when the aliens do answer, they’ll speak in high pitched voices and laugh at how dumb they sound. And they’ll eat Smash instant mashed potato. (Can you even get that now?)

I was excited about such a message until I learned that the one they sent in 1974 still has a good 24000 years and then some to reach its destination somewhere in outer space and then the same time to get back.  Not a lot of point in that, then.  That didn’t stop them launching SETI@home in 1999 or having a pin board for visitors to leave a Post-It note of the question they wanted to ask.  Reminded me of Duran Duran…

“Is there anyone out there?” 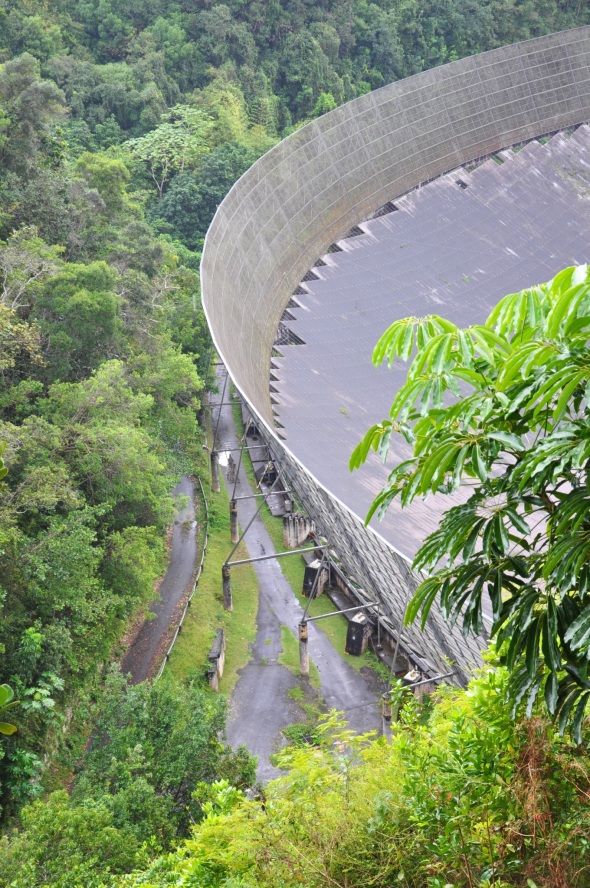 There’s a lot of science stuff that was well beyond my comprehension and interest, but also a series of interactive exhibits, probably aimed at children, that were fun to try out.  There were bits of meteorite collected from where they’d fallen, many in deserts, some scarily recently.  I did enjoy playing a simple computer game to shoot down asteroids and some kind of playground roundabout that if you acted like a figure skater and stuck your leg out, it would change speed.  I would tell you what that’s got to do with the space theme except I was so dizzy when I got off I couldn’t read the explanations.

We watched a short film about the Observatory.  It hadn’t been updated to reflect that this is no longer the world’s largest radio telescope (now that’s in China, quelle surprise).  It was interesting nevertheless.  After seeing the film, we took a VIP tour which was just a ride in a bus but it did take you right to the edge of the “dish” and that’s what really gave me a sense of scale.  Plus, the guide said that Pierce Brosnan was a complete wuss when he had to do his action scenes which cheered me up no end as I don’t much like his Bond now Daniel Craig has shown us how it should be done.

If you’re in Puerto Rico and you’d like to visit the Observatory, it’s around an hour and a half’s drive from San Juan.

This entry was posted on February 4, 2017 by juliamhammond. It was filed under Destination information, Independent travel, Latin America & the Caribbean and was tagged with Arecibo Observatory in Goldeneye, Arecibo radio telescope, Bond film, Puerto Rico.