Translating as the Scenic Route, Puerto Rico’s Ruta Panorámica consists of 167 miles of twisting mountain roads that bisect the island’s verdant interior. Driving on this Caribbean island was fast though rarely furious. Although many a driver strayed onto our side of the road as they tackled the many blind hairpins, we didn’t hear a horn hooted in anger. Plenty of vehicles had horns which imitated police sirens, however, which was disconcerting at first. This was also the road that attracted the boy racers in their pimped up orange, blue or red Jeeps, sound systems blaring out the bass as they tried to outdo each other’s decibel count.

We began in Guavate, a short drive from the easternmost point of the Ruta Panorámica. On Sundays, half the island’s population winds its way up the steep switchbacks to eat suckling pig in one of the village’s many lechoneras. Whole pigs rotate on spits, drawing in the punters, while chefs armed with machetes hack the glistening animals into bite sized pieces. This isn’t fancy dining: you’re just as likely to get a lump of bone as you are a hunk of melt in the mouth pork, but the crackling is to die for and the atmosphere warm and inviting. Stalls loaded with helium-filled balloons and soft toys ensure that amidst all that Medalla beer, it remained a determinedly family-friendly occasion.

The party at Guavate goes on all afternoon, but we were keen to drive at least part of the Ruta Panorámica, picking it up midway between the towns of Cayey and Aibonito. Climbing steadily, we followed a tour bus, grateful of its slow pace for the extra time it gave us to judge the severity of the bends. Despite our unexpected guide, we still managed to take a wrong turn and missed seeing the Cañón de San Cristóbal, though we might only have caught a glimpse of this deep chasm from the road.

At the Mirador Villalba Orocovis, we grabbed the last space in the parking lot. Sweeping views south across lush vegetated slopes topped by charcoal grey scudding clouds drew a small crowd. The beat of salsa and reggaeton formed a noisy soundtrack to the chaotic scene and judging by the groups of people crowding around car boots, parking lot picnics were even more popular than the stunning views. 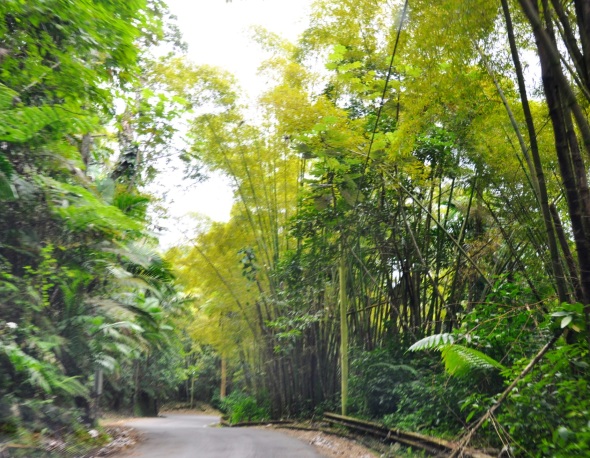 Continuing west, we climbed into the Toro Negro Forest. Giant stands of bamboo topped by frothy lime green leaves diffused the afternoon sunshine and formed towering arches over the narrow road. Here and there, we hit a traffic jam caused by cars trying to squeeze into the undersized gravel verges that formed the car parks of local neighbourhood restaurants. Driving the road required a steely nerve: swerving around deep potholes onto the wrong side of the road ahead of tight bends. Our guidebook advised tooting the horn at such points to alert oncoming traffic but this wasn’t a convention observed by anyone, least of all the local drivers who formed the majority of road users. 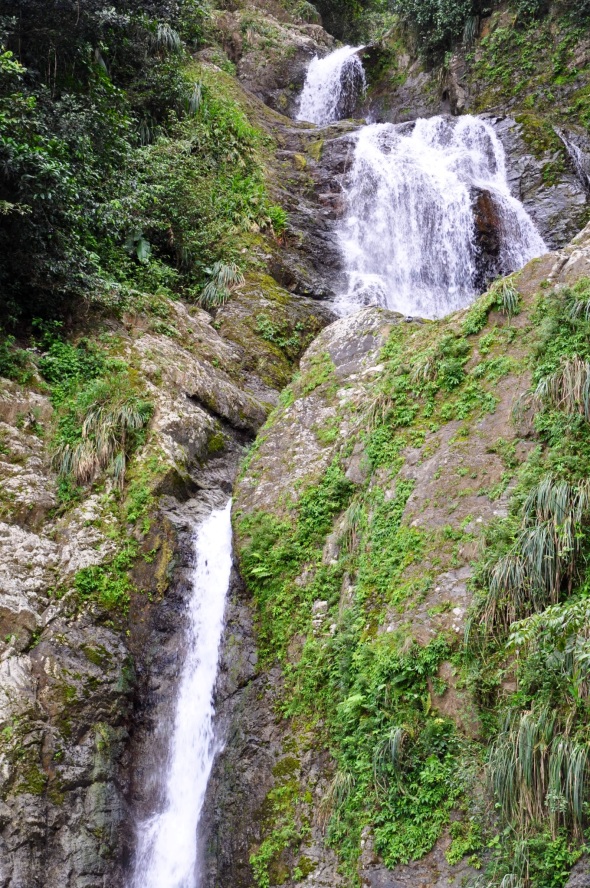 Everyone was in a hurry, except the stray dogs who pottered in the dirt by the side of the road, wandering into the road at worryingly frequent intervals. Some, heartbreakingly, were road kill. Families sat on cheap deckchairs by the side of the road, some animated, others reflective. Their possessions were modest: homes characterised by peeling paint and scruffy yards cluttered with ageing cars sporting years of dents and scratches. It was testament to the fact that local knowledge didn’t make this crazy road any easier to navigate.

By then, we were in the heart of Puerto Rico’s productive coffee country, and our next stop, a hacienda just short of the town of Jayuya, was proof that the soil and the climate in these hills was well suited to the crop. We queued to sample the rich, almost creamy espresso, fuller bodied and sweeter than we were accustomed to. It was so smooth, we went back for more, this time in the form of frozen coffee. We slurped it through straws, as we sat by the lake on pallet benches slung with rough hessian sacks, watching tiny birds ripple the surface as they dive bombed the water for flies. The ageing machinery above the hacienda’s cafe revealed a surprise: it was made by Bentall’s agricultural works at Heybridge Basin, just a few minutes’ drive from home.

We were keen to get off those dangerous mountain roads by nightfall, cutting north and spiralling up and down through the countryside for what seemed like forever. We were sure we’d missed a turnoff, but instead, we’d woefully underestimated the time it would take us to cover such a small section of the map. Eventually, the Ruta Panorámica spat us out onto the racetrack that would deliver us to San Juan, a world away from the sleepy Puerto Rican countryside that was as more-ish as its coffee.

This entry was posted on January 10, 2017 by juliamhammond. It was filed under Destination information, Independent travel, Latin America & the Caribbean, Puerto Rico and was tagged with Puerto Rico, Ruta Panoramica.