On a mission in San Juan Cap, California

With so many names and signs in Spanish, let alone the number of voices you’ll hear speaking the language, it’s hard to ignore that this part of the USA was once Spanish. In the heart of Orange County, midway between Los Angeles and San Diego, I visited the little town of San Juan Capistrano, drawn by the mission of the same name. (And a really good Mexican restaurant, but that’s another story…)

Originally founded in 1775, Mission San Juan Capistrano was the seventh of twenty one such missions in what was them known as Alta California. Spain wished to expand its territory and at the same time, convert the native Americans to Catholicism. The missions were designed to be a place of learning and training, though of course, once converted to upright Spanish citizens, the native population would also be paying tax. The Spanish brought their own animals, food and technology, all of which piqued the curiosity of the locals. Once sucked in, however, there was no going back: converts could not leave the mission grounds without permission. By 1806, Mission San Juan Capistrano had a population of more than 1000 people. 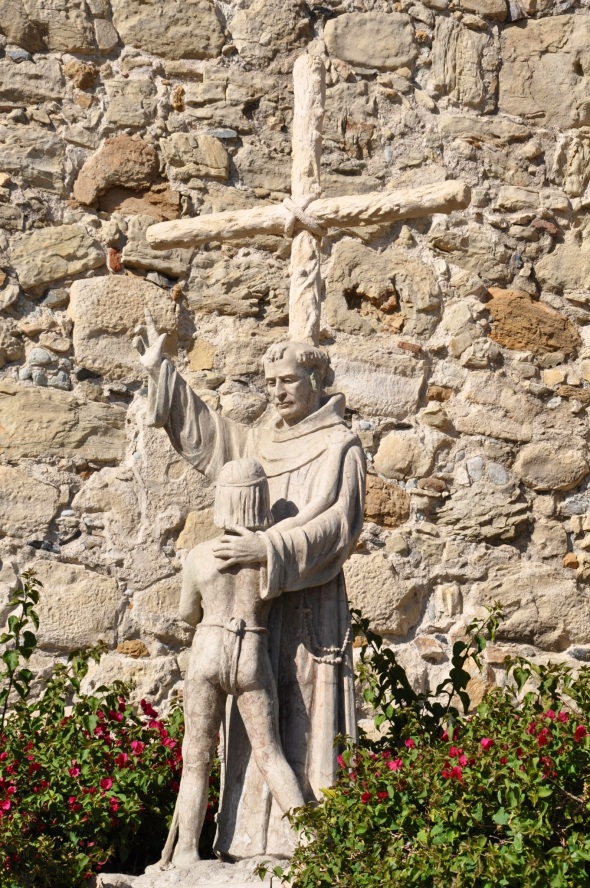 At its heart was the delightful Great Stone Church. Today, this church stands as a ruin, destroyed in an earthquake in 1812. The two bells that sit in front of the structure are actually originals, named San Vicente and San Juan, the latter damaged in the quake, though the four that swing from the bell tower are newer.

The mission collapsed too, let down by the Spanish government so failed to send essential supplies, its residents plagued by outbreaks of disease. The final nail in the mission’s coffin came in 1821. Mexico became independent of Spain and with that, Alta California was no longer a Spanish possession. The Mexican government officially ended the mission system in 1834 and the MSJC’s land was parcelled up and sold to twenty prominent local families. In 1845, the mission itself was sold by the then governor to John Forster, who used it as the family ranch. He paid just $710 for it though its value was over $54000. Did I mention he also just so happened to be the governor’s brother in law? 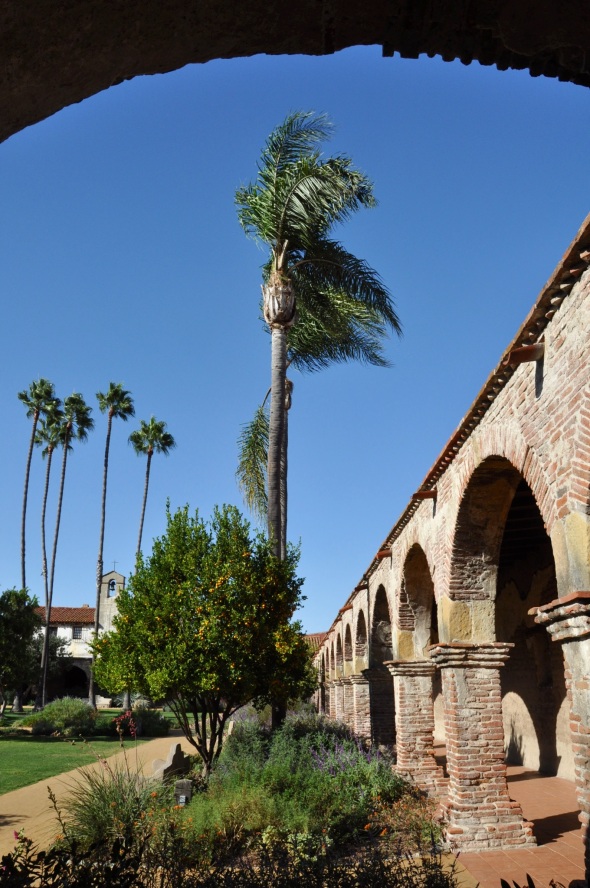 Things changed again in 1848. Mexico lost the Mexican-American War and under the Treaty of Guadalupe Hidalgo, California was ceded to the Americans and became a state in 1850. President Abraham Lincoln was petitioned to return the missions to the Catholic church and like many, Mission San Juan Capistrano was the recipient of much needed attention and funds from well-heeled philanthropists. Today, such work continues, and visitors and benefactors continue to ensure the mission survives, adding their own flourishes to the existing structures. The fountain in the main courtyard, full of water lilies, is one such embellishment. It’s a tranquil place despite the sightseers, its courtyards full of cacti and hibiscus, framed by brick arches and adobe walls.

The Serra Chapel that stands alongside the ruined Great Stone Church is a still a working church. Its adobe walls are left partially uncovered enabling you to see how it was constructed. Inside, its simple figurines and carvings stand alongside intricate wooden carvings overlaid in gold leaf, allowing to be both rustic and ornate at the same time. The altar, imported from Barcelona, is about 400 years old. 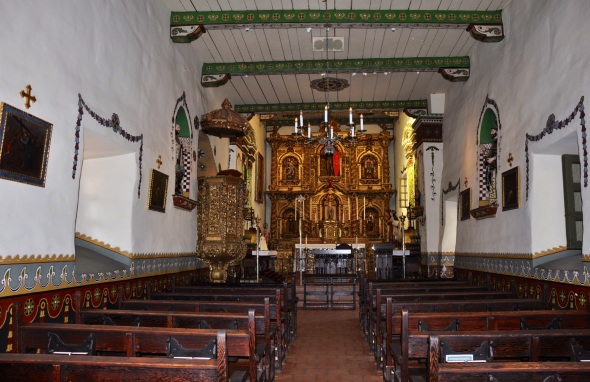 Many visitors come to witness what the mission calls the “miracle of the swallows”. On March 19, the town celebrates the return of swallows from the south. I’m guessing there are some people out there who are gullible enough to believe this is the actual date, but anyway, March is the general time to expect them. The migrating swallows build nests in the nooks and crannies of the church walls where they stay until October. It would be another month before they would return to Argentina. I didn’t see any, but was assured they were there. It said so in the leaflet.

This entry was posted on September 28, 2016 by juliamhammond. It was filed under Destination information, Latin America & the Caribbean, North America and was tagged with California, missions, San Juan Capistrano.