September 16 is Mexican Independence Day.  Outside Mexico, it is overshadowed by the Cinco de Mayo celebrations which many confuse with Independence Day.  In fact May 5 is the anniversary of Mexico’s victory over the French at the Battle of Puebla in 1862. Mexican independence instead was won from the Spanish in 1821 after a war which commenced on September 16 1810.

The fight to extricate Mexico from Spanish rule began with what’s known as the Grito de Dolores, translating as the Cry of Dolores, a rallying cry designed to incite revolt. It was uttered in the small town of Dolores, located a short distance from the colourful city of Guanajuato in central Mexico.  The exact words that marked a new chapter in Mexico’s history have been forgotten, but the man who spoke them has not, Miguel Hidalgo y Costilla, a Catholic priest whose statue you’ll find in Guanajuato.  Hidalgo was executed a year later but his country owes its freedom to his bravery.

I took a bus to Guanajuato a few years back, travelling from the pretty artists’ enclave of San Miguel de Allende.  Arriving in the place they call the “place of frogs” because early residents thought the surrounding hills looked like one, I was struck by the city’s colour.  Looking like a city that has shares in Dulux, almost every building is painted a vibrant shade.  Individually, they’re pretty, but the overall effect is stunning and it’s no surprise to learn that they’ve earned a UNESCO listing.  I took the funicular up to the statue of El Pipila and looked down over the Teatro Juarez immediately below.  It really is a splendid place. 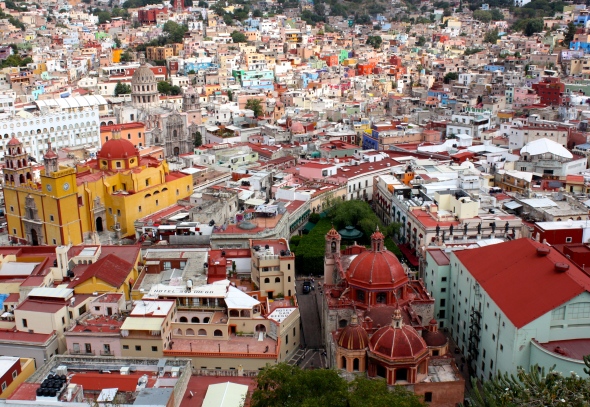 Once, Guanajuato was a mining town, sitting on vast reserves of silver, making it one of the most productive mining areas in the country.  The La Valenciana mine, located in the village of the same name, brought huge wealth to the Spanish mine owners and provided many labouring jobs, but it was closed down when the Spanish were given their marching orders.  The mine did reopen, but is now permanently shut, though tours are available.  Even if you don’t descend underground, it’s worth heading to La Valenciana to see the ornate San Cayetano church.

Back in Guanajuato, one of the best ways to appreciate the city is on foot, wandering along the many alleyways, including the Callejon del Beso (the alleyway of the kiss) where it’s so narrow it’s possible to kiss your lover from balconies on opposite sides of the street. Cafes are another thing that the city does well, scattered in the plazas that are lined with museums, theatres, churches and historic mansions.

Bronze sculpture of a musician outside San Diego church

The day is marked with fiestas, flags, parades and partying.  Whether you’re in Mexico or not, I’m sure you’ll join me in raising a glass to that.  Viva Mexico!

This entry was posted on September 15, 2016 by juliamhammond. It was filed under Destination information, Events, Latin America & the Caribbean, Uncategorized and was tagged with Grito de Dolores, Independence day, Mexico.