Visiting a cemetery on holiday? You’re dead right I do!

Thanks to myWanderlust, I recently became aware of a fantastic blog by Rachelle – better known to those on the forum as Moose on the Loose – called http://www.stoneanddust.com. With her blessing, I’ve decided to blog this week about my own favourite cemetery visits. It may seem odd or macabre, but they are fascinating places with more than a single story to tell. And if you’ve been to any on your travels, I’d love to hear about them. 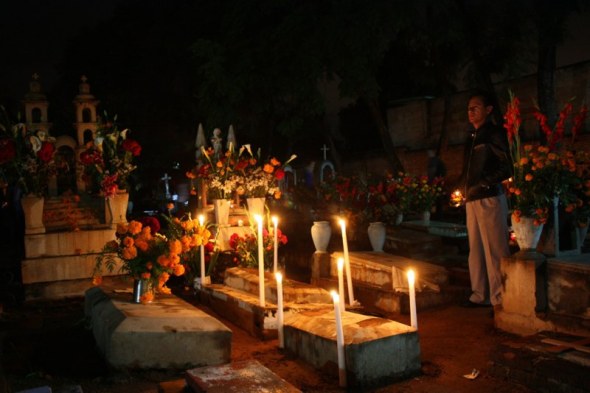 I visited Oaxaca’s old and new cemeteries when I visited for the Day of the Dead festivities. Each year, at the end of October, preparations are made to welcome the ancestors back for a celebration. Graves are decorated, food prepared and the Mezcal bottle drained to toast the gone but never forgotten. Lit by candles and adorned with more marigolds than I’ve ever seen in my life, Xoxocotlan’s old cemetery was the more atmospheric. In Xoxocotlan’s new cemetery, glow sticks and candy floss were the order of the day against a soundtrack of Michael Jackson’s Thriller.  Read about the festival and find more photos here:
http://juliahammond.co.uk/Travel/DIA_DE_MUERTOS.html

The cemetery, like the city, was damaged in the 2010 quake

My companions in the ageing cemetery in Haiti’s capital weren’t mourners – they weren’t even human. Instead of the expected hustlers, I was tailed by a goat and several chickens. Locally known as the Grand Cimetière, it’s an important focal point for followers of vodou. Parts of the Haitian capital aren’t very safe and this was reputedly one of them, so I lingered only long enough to absorb my surroundings and explore some of the more accessible graves, concerned that if I strayed too far from the main paths I might find myself the victim of a mugging.

If you’re in NOLA and need a guide, Sandy comes highly recommended

During my first visit to the Big Easy, I’d been fascinated to learn about Hurricane Katrina and its aftermath by one of the most interesting guides I’ve ever had the fortune to meet. On my return, I found out that Sandy was guiding a tour of St Louis Cemetery Number One. It’s the site of vodou queen Marie Laveau’s tomb, and after some vandalism, tours are only possible with a guide. Sandy regaled us with tales of the dead and the city that swallowed them up, with her distinctive humour and deadpan delivery. Who knew that temperatures inside those tombs were so high they acted like a mini crematorium?

Another cemetery where tombs are largely located above ground rather than the below ground graves I’m used to in the UK is La Recoleta in the Argentinian capital Buenos Aires. Located in an upscale neighbourhood, it’s home to many of the city’s rich or famous former inhabitants, including of course Eva Peron. When I went to pay my respects at her tomb, I was touched by a man holding his own personal vigil to the iconic former first lady, proof that the cult of Evita lives on.

This time, it’s a cemetery for dogs, a short metro ride from the centre of Paris. To give the place its full name, Le Cimetière des Chiens et Autres Animaux Domestiques has an eclectic mix of graves of much loved pets and canine heroes. Rin Tin Tin, the German Shepherd star of many Hollywood movies, was brought here to be buried after his death in 1932. Perhaps the most poignant of the inscriptions relates to a canine hero, a St Bernard called Barry, who saved 40 human lives before dying as he tried to save the 41st.

Highgate is well known as the place where Karl Marx is interred, but my favourite of the UK capital’s graveyards is that of the church of St John at Hampstead. Inside, you’ll find two tombs of note. The first is of John Harrison, the clock maker credited with inventing a timepiece that could roll with the waves without losing time and thus enabling us to accurately define lines of longitude. The other is that of another John, Constable, whose paintings of the Essex and Suffolk borders sum up the beauty that can still be seen in my home county today. For a walking itinerary in Hampstead, plus others in Notting Hill and Marylebone, why not have a look at my Unanchor guide, available on Amazon here:
https://www.amazon.co.uk/London-Unanchor-Travel-Guide-Marylebone-ebook/dp/B00II74URG

This entry was posted on August 16, 2016 by juliamhammond. It was filed under Destination information, Independent travel, Uncategorized and was tagged with cemeteries, cemetery, cemetery tours.