The best view in town

New York’s skyline begs to be admired from the top of one of its skyscraper observation decks, but which should you choose? Read my guide to the three main contenders, the Empire State Building, Top of the Rock and the new kid on the block, One World Trade Center, to find out which is best for you. For all three, unless you ascend in the evening, expect long queues so book in advance online.

The glamorous one: Empire State

The Empire State has been impressing visitors to the Big Apple since it opened back in May 1931. From the minute you swing through its revolving doors into the lobby adorned with gilded Art Deco wall panels you can’t fail to be impressed. It’s featured in more Hollywood films than you could imagine and it’s just about the most iconic site New York has to offer.

Best bit: the view down Fifth Avenue from the windswept 86th Floor observation deck looking towards the World Trade Center and the Statue of Liberty

Worst bit: the wind can be biting at this height, and you’re outside, so wrap up well or switch to the opposite side of the observation deck

The best view in town: Top of the Rock

What the Empire State Building can’t offer is a view of the Empire State itself, which is where Top of the Rock trumps it. Offering split-level viewing platforms behind glass as well as an inside lounge with padded leather benches, this is also the place to get a close up look at the Chrysler Building.

Best bit: the glass panels have gaps big enough to squeeze a camera lens through but not so big to bring on the vertigo

Worst bit: finding your way out at the bottom can be difficult as the Rockefeller Center is a maze of corridors

Cost: $38 per adult for regular access
Opening hours: 8am to midnight daily, last elevator up 11pm
Where to find it: 50th Street, between Fifth and Sixth Avenues 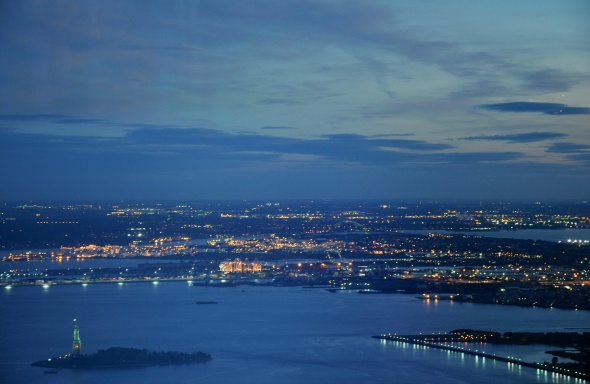 The view south, overlooking the Statue of Liberty

Also known as the Freedom Tower, this, the tallest skyscraper in New York finally opened in May 2015, following the terrible collapse of the Twin Towers on 11 September 2001. It’s a lot more hi-tech than its competition, offering iPad rental for visitors to identify the city’s landmarks and guides that tell New York stories. There’s a surprise waiting as you exit the elevator but I won’t spoil it for you.

Best bit: the elevator ride takes you up 100 floors and whizzes through time as it does so giving you the brief chance to witness New York being built

Worst bit: the observation decks are behind glass, leaving photographers frustrated by reflections and dirty fingerprints

Cost: $40 per adult for general admission
Opening hours: 9am to midnight in summer, 8pm closing from September until Spring, last elevator 45 minutes before closing
Where to find it: West Street, corner of Vesey Street

It’s still hard to beat the Empire State if you’re a first-time visitor to the city, but if you have time, plan to ascend the Top of the Rock too. It’s well worth doing one by day and the other at night for two very different experiences. Time at least one of them for sunset. I wasn’t as impressed by the One World Observation Deck because of the issues with getting a decent view of the city, especially once it got dark and the lights were switched on.

In March 2020, Edge opens at the Hudson Yards – watch this space for my review of New York’s fourth observation deck.

This entry was posted on June 17, 2015 by juliamhammond. It was filed under Destination information, North America and was tagged with Empire State, New York, One World Trade, Top of the Rock.