The bus drivers of New Zealand

So often, it’s the people that make a place memorable more than the sights themselves. To really engage with a place, there needs to be a connection, and it’s the human interactions that facilitate that. I’ve been thinking about which places have the warmest and most welcoming locals, and I have to say New Zealand comes high up the list. I spent a week in South Island using the reliable bus system to see the main sights, but didn’t realise just how much I’d enjoy the journeys between those places. Here’s a piece I wrote for myWanderlust not long after I returned.

Inside the man there was a scruffy boy itching to get out.

The commentary as we edged down South Island’s west coast may have been aimed at adults, but tales of Australians landing planes upside down in the swamp came right out of Boys Own. With his untamed mop of greasy ginger hair, Dave was one of those people where you could still vividly imagine what he’d have looked like as a lad, scraped knees and all. Heading south from Greymouth into country country, everyone got a cheery wave, but then Dave knew most people. When it came to the drop off, he flicked the rolled up newspaper expertly through the window hatch as he once had from his push bike, slowing only slightly before checking his wing mirror to smugly inform us it had landed accurately.

“Yup, that’ll do ya. That paper’s printed at midday. If I didn’t run it through, they wouldn’t get it until tomorrow. No point in old news, is there?” 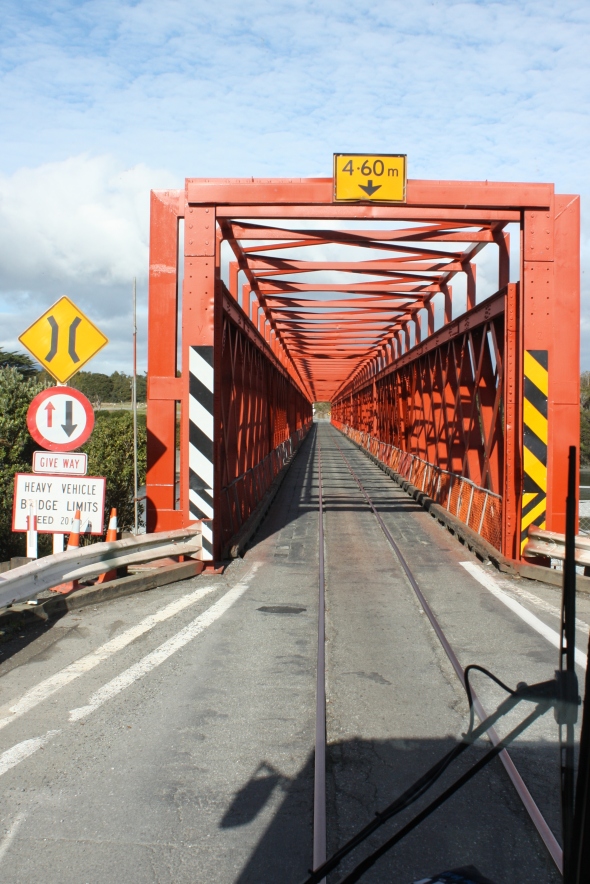 Dave told us he had the best job in the country but salt and pepper haired George disagreed. Picking up the baton from Franz Josef, he made sure everyone had visited the glaciers, threatening to leave us behind if we couldn’t tell him enough about what he insisted we should have seen. 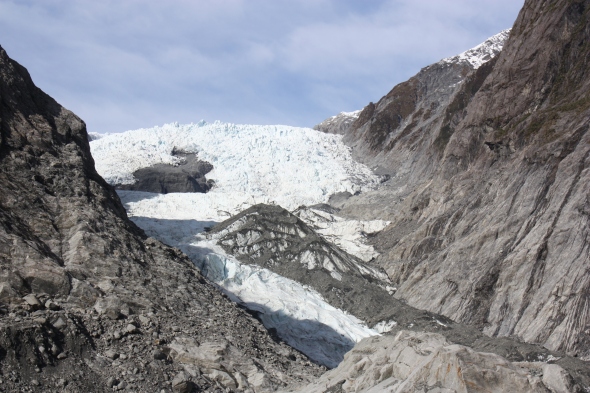 He wound us expertly round impossibly tight turns to deposit us at viewpoints framed with the ubiquitous but elegant tree fern, fronds shimmying like a Twenties flapper. Jovial when on the move, he was quick to chastise anyone who dared hold up the coach. At breakfast, out of serendipitous necessity swapping a motorway service station for a salmon farm deep in the forest, he joined me at my table. The conversation flitted back and forth as George downed his second cup of tea. Gruff George, it turned out, was a gentle man underneath; having lost his wife to cancer, he confided that meeting people on his bus had helped him through the tough times.

Wheezy Pete, with a capacious belly nurtured over many years supping good beer, shook our hands as we returned from a roadside hike to a waterfall. George introduced his replacement and pointed to the bus parked on the opposite side of the road. 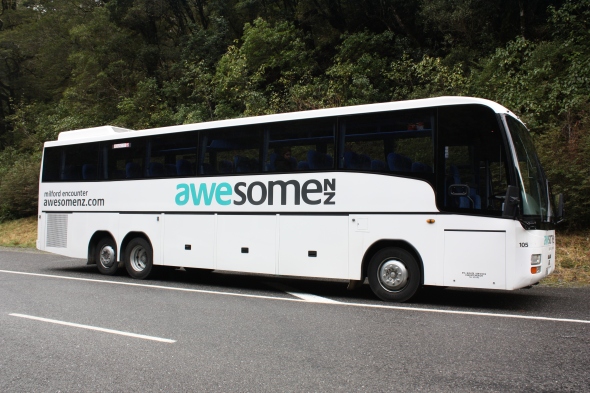 Awesome NZ just about sums it up!

“You lot are hard work,” he chuckled, “there are only four on that other bus, I’m off back to Franz for a quiet life.”

And so the thirteen of us headed for Queenstown, encroaching steadily on snow-capped mountains as we edged alongside Lake Wanaka. Pete pointed out the world’s oldest bungee jump, offering a free ride to anyone who took up the challenge.

A few days passed before I met Dione. Dione was different, the first driver under forty, with a baseball cap and an exceptionally good knowledge of sheep. When not talking farming, he spoke incessantly of the weather.

“We have two hundred days of rain down here, bringing seven metres of water every year. For you folks that measure in millimetres, that’s a lot of rain!”

But he had the most spectacular drive, through the mountains down to Milford Sound. Skirt folds of Rimu trees parted to reveal the tiniest slivers of silvery petticoat cascading into puddles that blurred onto the water below. Our day was sunny, the deep azure of the sky framing the sheer cliffs of the fjord and diamonds pricking the water.

“Jeez, you guys are lucky. Even the keas are behaving today – yesterday those bloody parrots flew into the bus and shat all over the dash.”

Kea inspecting the bus for Dione

Wiry Tom knew he had the rough end of the deal, for it was he who would remove us from the crisp air of the mountains and carry us across the Canterbury Plain in all its sheep-strewn monotony. He tried his best with Mount Cook, but our wonder at the beauty of New Zealand’s highest peak was tainted by the knowledge of what was to come. I passed the time trying to figure out which Hollywood movie actor he reminded me of; a cop, no, the President? It was a twelve hour ride and I reached Christchurch none the wiser.

The road to Mount Cook

Yes, Dione was indeed different. He was the only one who wasn’t a scheduled bus driver, our driver-guide on a coach tour to one of the country’s best known attractions. In New Zealand, buses aren’t just there to take their passengers from point to point. To be a bus driver on South Island you needed a sense of humour and a good head for facts. I’d say a good aim and experience as a paper boy got you a long way too.

This entry was posted on May 13, 2015 by juliamhammond. It was filed under Destination information, Independent travel, Oceania and was tagged with New Zealand.