Over the last couple of decades, I’ve lost count of the times people have labelled me ‘brave’ for travelling without the safety net of a group tour or package holiday. For me, travelling independently fits as comfortably as a well-worn slipper.  Throwing my lot in with someone else, for me, is stressful and worrisome.  Here are my top five reasons for travelling alone:

Don’t get me wrong, I have a blessed life at home, where I love my role of wife, daughter and general slave to my canine offspring. But for a few weeks each year, I get the precious reward of time with myself when I don’t have to compromise.  I can do what I want, when I want.  The freedom I get from solitude is one of the prizes of travel.  The map becomes my play thing, a border ripe for a crossing, an obscure country my next must-see destination.  I can cram my days with sightseeing or laze in a hammock and do nothing.  I can stay up all night or hit the sack before dinnertime.  I can experiment with new foods or eat at the same cafe for the fifth night running.  No negotiation, no justification – just pure unadulterated selfishness.

Travelling as a couple or within a group acts like a cocoon from the outside world. Travel alone, and the level of interaction you’re going to get depends on the effort you make to reach out to people.  It forces you to form relationships and invest in conversations.  Hiring a guide or a driver just for yourself is extravagant but also a window into the soul of the place you’re exploring.  But it’s the everyday encounters that can be the most memorable.  Sometimes, it will begin with the offer of a sweet from a neighbour on a park bench, a helping hand up a rocky path or a casual conversation on the back seat of a local minibus.  Always, it will be rewarding.

No one can talk you out of danger

At home, I’m generally risk averse but that seems to dissolve once I step foot on foreign soil. In some cases, it’s unavoidable.  I wouldn’t dream of backing off my driveway at home without fastening my seatbelt, but necessity has forced me to ride beltless for hour after bumpy hour in vehicles that haven’t seen a mechanic in decades.  Over the years, I’ve developed a fatalistic outlook on life, rationalising that I could just as easily be killed on the roads at home.  Sometimes, the activities I’ve done have involved a calculated risk – walking with lions, hiking to the crater of a very active volcano, overnighting in the murder capital of the world – but the memories I’ve created have been worth it.

It hones your skills

One of the biggest fears people have of travelling solo is what would happen if things were to go wrong. Without a travelling companion, you are forced to rely on yourself for a solution.  I’ve only ever missed two flights. Once in Posadas, near the Argentina-Paraguay border, the whole airport was shut by the time I arrived as the airline had omitted to tell me they’d moved the flight forward by five hours.  In Bangkok, it was my own fault.  I muddled a midnight flight and turned up three hours early only to find I was almost a day late.  Both problems had a solution, a very comfortable cama-bus in Argentina and an extremely understanding check-in agent in Thailand.  The only time I really thought my problem-solving skills weren’t up to the job was in Ulan Ude in Russia, where they had unhelpfully hidden check-in behind a signless whitewashed wall.  I tried miming and pointing at words in my phrase book – all to no avail.  Eventually someone slipped through the well concealed door and I figured it out in the nick of time. 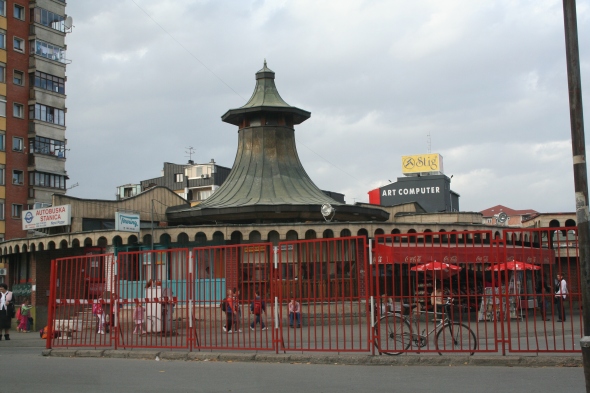 Bus station with no bus, Serbia

I couldn’t do the amount of travelling I’ve done at the prices charged by most tour operators. I can shop around for the best flight deals, find a hotel room which doesn’t penalise the single traveller with a jaw-dropping supplement and can opt out of the parts of itineraries that just don’t interest me.  Local transport is invariably cheaper than a seat on a tour bus and I don’t pay entrance fees for attractions that I don’t want to visit. It can occasionally go wrong, of course, but that’s what good insurance is for.

Room for one more, Senegal

This entry was posted on October 15, 2014 by juliamhammond. It was filed under Travel advice and information and was tagged with Independent travel.